What’s the worst thing in your parents’ mind that you did as a teenager?  Wrecked the family car shortly after getting your driver’s license?  Got your girlfriend pregnant?  Maybe you threw a big, noisy and messy party at their home while they were away?  Well, my teen transgression was much nerdier, but it did have the benefit of teaching me some important lessons: wires make a difference, and grounding is important.

What could I possibly have done, you ask?  Well, my parents, who rarely ever left town without us kids, decided to finally take a long weekend away from us.  They took advantage of a weekend special of dancing, dining, and lodging at a hotel about 100 miles away.  After all, they thought, I was at home from college and my sister had just turned twenty-one, so surely we could look after my twelve-year-old brother.  What could go wrong?  We were trustworthy kids.  I had recently purchased my first quality stereo component, a Pioneer QX-8000 quadraphonic receiver, which I was obsessed with. So when I came home from college I’d be sure to hang around at home with my stereo, watching my brother, and staying out of any trouble.  What they didn’t know was that I was bothered by a bit of multipath distortion on my favorite FM station: Georgetown’s WHFS, home of very popular DJs Surf and the Weasel.  I loved that station and the progressive and psychedelic rock they played!

I had started receiving and collecting both Lafayette Radio and Allied Electronics around age eleven.  I’d pour through them from cover to cover every year, numerous times, dreaming about what electronic gear might lie in my future. It was early Saturday morning, and I had a hunch that I knew what might solve my multipath distortion problem. I had recently read an article in High Fidelity Magazine about a dealer in upstate New York who had installed an FM antenna on a customer’s roof.  The article was quite detailed explaining how to safely mount a mast and antenna securely, as well as the importance of grounding the antenna. So I headed to Lafayette, with their latest catalog in hand, in order to check out their FM antennas and accessories. 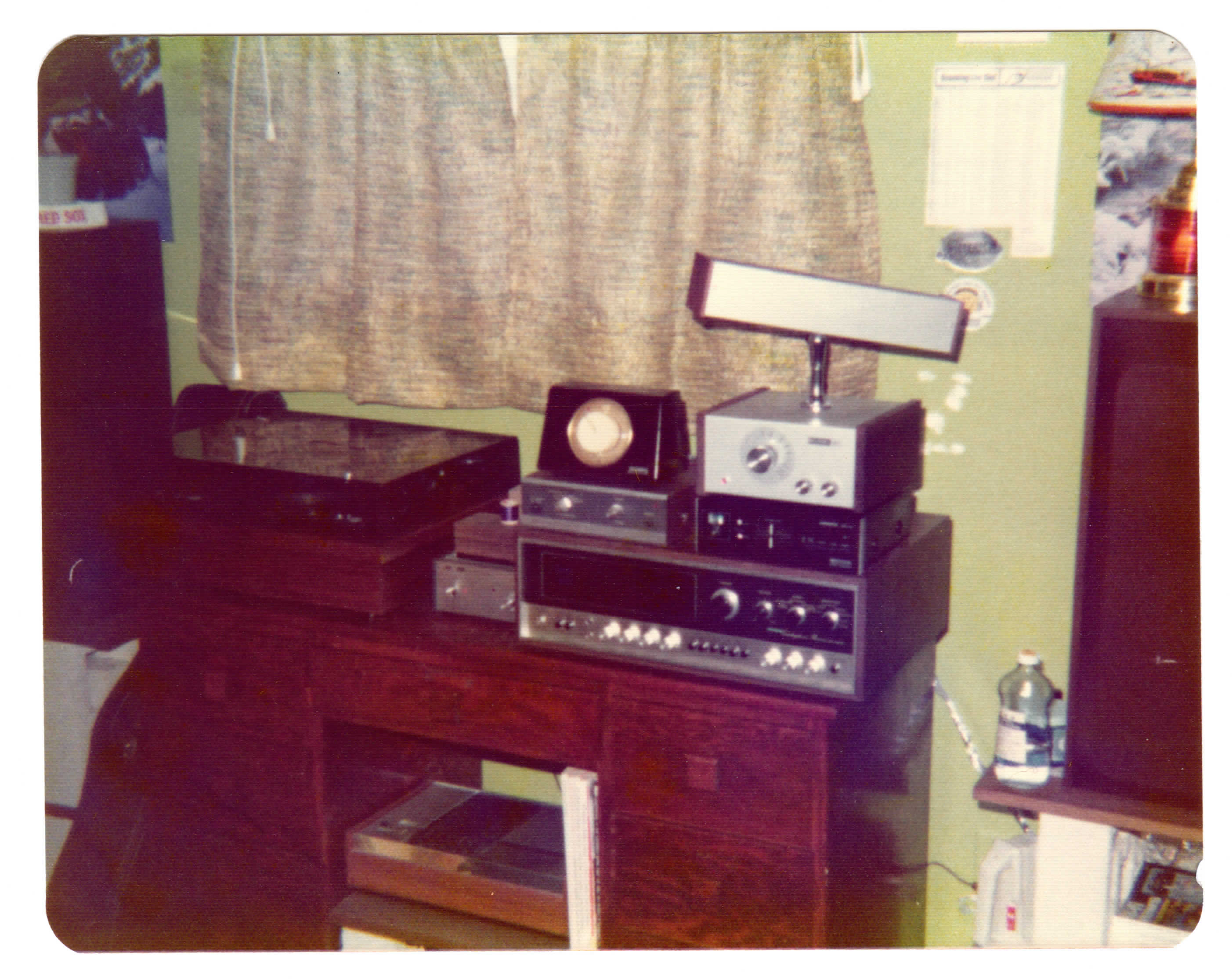 I had a plan. My bedroom was on the corner of the first floor of our house, and my Dad had a nice, sturdy ladder. I was going to drill a hole through the side of the house in order to bring the twin lead to my QX-8000 in the bedroom. I knew the 6-element Finco FM-4G was $17.15, while the 10-element Lafayette FM “double driven” model (with a whopping 10–foot boom) was just $11.95.  Plus, I’d need about 50 feet of 300 ohm twin lead at $2.29, a five foot antenna mast at $1.49, heavy duty 4” wall brackets at $4.78, several wood screw insulators to hold the twin lead where it would run down the wall from the roof, a lightning arrestor, and a ground rod and ground wire for another $9. Then, the piece de resistance, I would need a plastic tube about 3/4 inch in diameter and about 13 inches long for $1.19. As I totaled up my expenditure in my head, I realized I was going to have more change left over from the $50 I had burning in my pocket (part time jobs really pay off) if I bought the bigger, but cheaper, Lafayette antenna instead of the Finco!  The total would be about $35 plus my labor (yes, I’m referencing the 1973 Lafayette catalog, that I still have, to confirm these prices!).  I paid the cashier, loaded up my goodies in my hand-me-down Corvair, and headed back home.

While the installation took me way longer than I expected (about four hours) the FM antenna was finally installed.  I had completed the job safely, only teetering on the roof once during a sudden gust of wind, but the sturdy mast saved me when I grabbed hold of it!  I also realized that I had to shove some gunk into the tube entering the house, so that it wouldn’t be a direct path for insects.  Wadded up bubblegum seemed do the trick…but I later changed that to insulating foam.  The Pioneer QX-8000 sounded great on FM, although I was surprised that the signal strength meter didn’t show much of a jump in gain.  However, since the multipath was highly reduced on WHFS, I was pleased over all.

I could hardly wait to show my parents my big accomplishment when they returned home Sunday afternoon!  I didn’t have to tell them, though.  When they pulled up in the driveway my mother instantly saw the antenna and shrieked, with hands to her face, “oh my God, Bob (sounded like “Bawb” with her New England accent), he’s ruined the looks of our house!”  No amount explaining how much better my FM reception sounded could calm my mother down.  You’d have thought I’d painted the house orange (which “Bawb” later did, although it was supposed to be “Harvest Gold”…but that’s another story).  I could tell my father was slightly amused and, I hoped, impressed enough with my newfound antenna installation skills that he could stave off the punishment my mother was demanding in exchange for her loss of curb-appeal.

The following week my father revealed my punishment: buy them a TV antenna with Alliance U-100 rotator for the TV in the family room.   The real punishment was not, however, my financial outlay for that purchase.  The real punishment was that, despite my proven new-found skills, I was not allowed to help—but watch my father install their new antenna to a vent chimney on the roof, standing in the backyard, poised to call for help if he fell.

My mother, upon seeing the new, added structure shooting from the vent chimney was further horrified.  But, our Montgomery Wards color TV (our first color TV!) now had a fantastic picture with no ghosting on any channels.   Even she had to admit that the antenna effected a huge improvement to their television viewing. 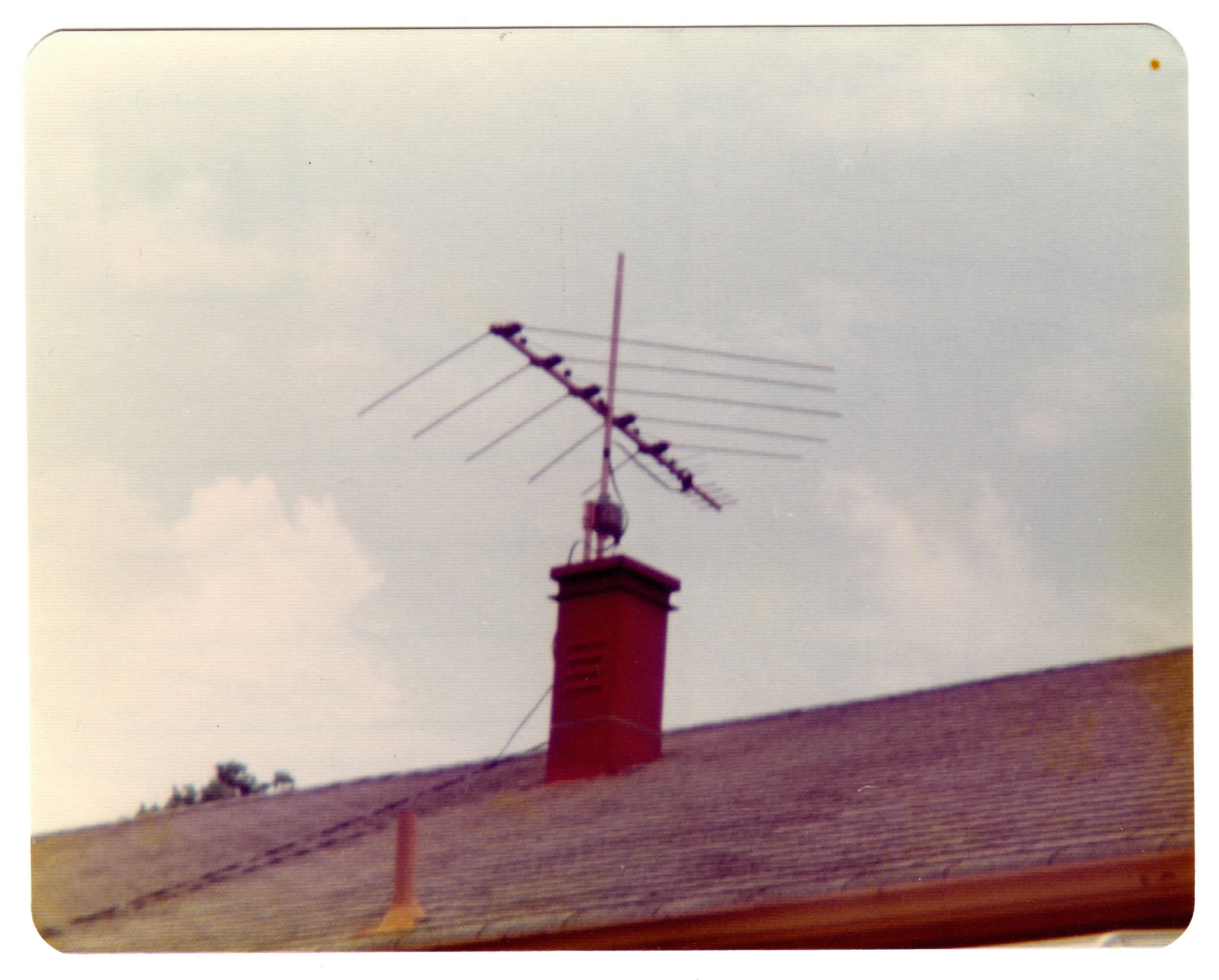 However, much to my surprise, he had only mounted the antenna about one foot above the rotator!  He could have mounted it another three feet higher!  What was up with that! Surely you want to mount an antenna up as high as possible for best reception and lack of interference.  I guess that was his one consolation to Mom; make it a teeny bit less noticeable from the front of the house.  My antenna, on the other hand, could be seen from any angle in the neighborhood!  I was so proud!  Oh, and the ¾ inch hole I drilled through the wall of the house to run the antenna wire through the plastic tube?  Well, my Mother never saw that until they sold the house and retired to Florida a few years later.  I had proudly shown that piece of work to my Dad who stated at the time, “pretty nifty…And NEVER show that to your Mother”.  It was hidden from view behind my stereo equipment thank goodness.

But folks, that’s not the end of this story.   I mentioned at the beginning that this experience taught me a bit about wires and grounding.  How so?  Well, after settling in a bit with my new antenna system for my QX-8000, I became a bit underwhelmed by the RF gain.  (I still have the QX-8000 although it’s languishing in my attic, lonely).   I decided that maybe I should have bought the more expensive, albeit shorter, Finco FM4G antenna.  So, off to Lafayette I went about six months later and bought one.  I decided that two is always better than one, so I replaced the five foot mast with a ten foot mast and mounted both antennas on the same mast, one pointed towards metro Washington DC, and the other towards Baltimore.  I added another twin lead wire to the new Finco and installed a “knife-switch”.  (Remember those?  They looked like a mini version of the switch Dr. Frankenstein used to bring his monster to life).  The knife switch allowed me to switch between the two antennas depending on which station I wanted to listen to.  The new twin lead connected to the Finco antenna had some kind of foamed insulation, so I experimented by switching the wires where they connected to the two antennas on the roof to compare the wires.  I discovered the slightly older wire actually had better signal strength.  My first realization that wires do make a difference!

I didn’t think she’d notice, but soon Mom wanted to know why there were suddenly two antennas where there was formerly only one.  She complained about this until I finally decided that the Finco FM4G was a better antenna than the Lafayette antenna—it was more selective and had better gain despite being shorter, better tuning and spacing of the elements no doubt.  “Hmmm,” I thought, “Save up a bit more money and I can take down the Lafayette and put an Alliance U-100 rotator on that mast so I can aim the Finco in any direction.  No more need for a second antenna.”  And that is what I did!  This change also eliminated the knife switch, meaning there was one less junction for the signal to pass through.  Eventually, I even tried using a coax, shielded 75-ohm cable versus an unshielded 300-ohm twin lead for less noise pick up. However, since that also means you lose a bit of signal strength, I eventually settled on the twin lead.  My multipath worries were eliminated by the use of the rotator, and I could relax without further modifications to my FM antenna set-up.  Being a big Red Sox fan, I often tried to listen to games at night on AM with the QX-8000 receiver, but the noise level was often too annoying.  I discovered that by running a ground wire from the AM antenna ground tap on the back of the receiver to the FM antenna’s ground rod outside, I could improve the AM performance pretty dramatically.  This provided a much, much lower noise level so that the signal I was seeking could emerge from the background.  A proper ground is a must in an audio system, and I can’t overemphasize how much that will take the performance of your system to an even higher level. 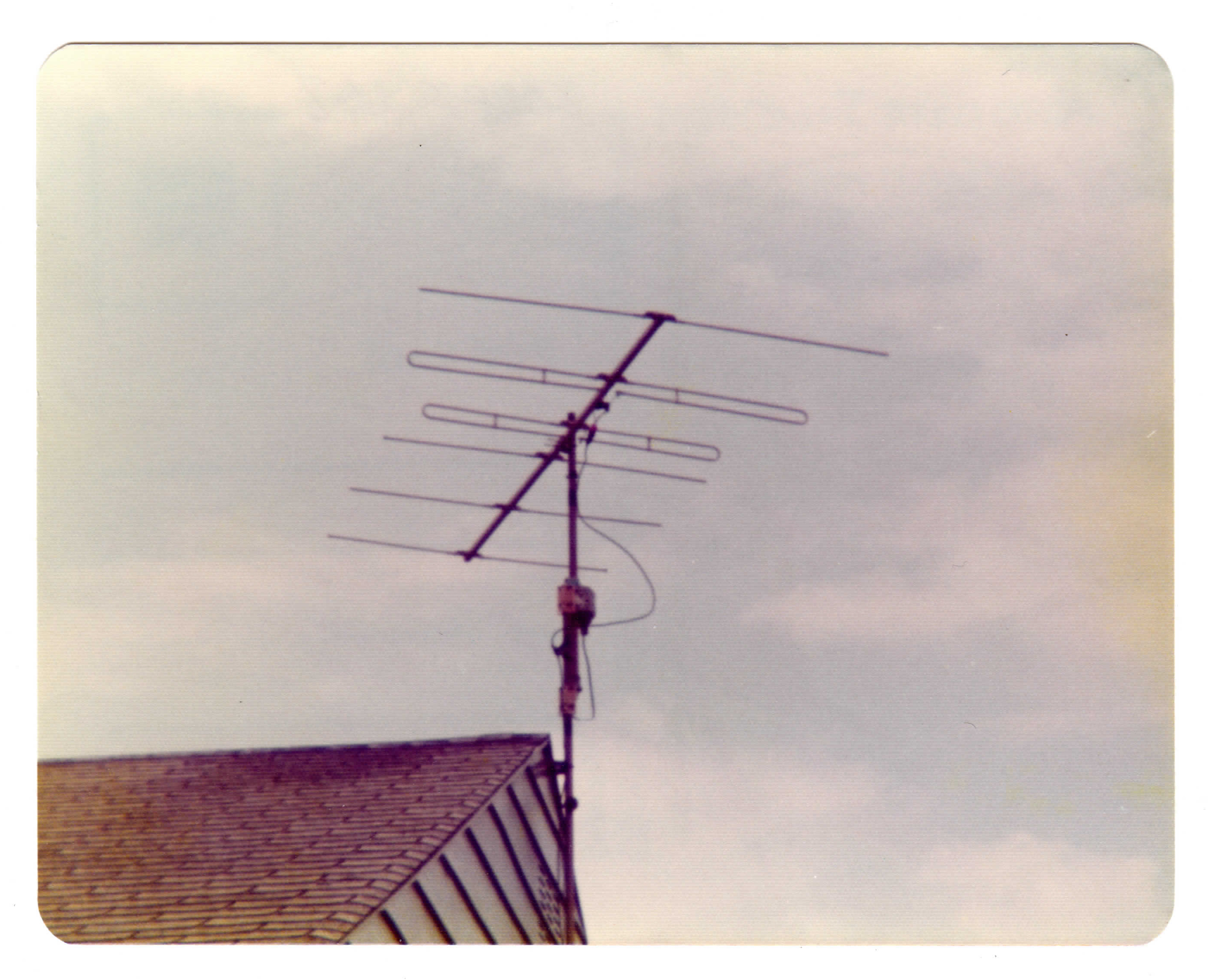 This is why I was so excited to work with Nordost’s QRT Power Products. Our QRT QBASE distribution bar helps establish a common ground in your system and eliminates ground loops. I had thought the QBASE was the end-all-be-all in grounding, until we released our QKORE products last summer.  The QKORE dramatically reduces the noise level in a system by creating a clean, artificial earth, which has a dramatic and positive effect on the sound—bass becomes tighter, extends lower, and becomes more powerful.  The overall image moves further out into the room and extends beyond the boundaries of the speakers.  It’s really quite dramatic, and has to be heard to be believed! For my mother’s sake, I wish I had those products when I was a teen, I could have hid them much better than a rooftop antenna!

Oh, and speaking of my old FM antenna set-up at the old family house—out of curiosity, I drove by that house on a business trip… and lo and behold, the FM antenna and mast were still mounted on the roof!  Strangely enough though, no twin lead-connecting cable could be seen.  I guess there are no audiophiles living there anymore!