The audio industry is always evolving. To better appreciate the technology that we enjoy today, we are going to take a look at that evolution, and dive into a few of the influential products that have helped shape the hi-fi universe into what we know today.

In the late 1920s, most theaters used oversized snail horns that would create a rough but functional sound for theatergoers. There was an obvious need for advancement with these aging speaker systems, and in the early 1930s audio aficionados got one: the Shearer Horn.

In 1933 John Hilliard, an acoustic engineer at MGM, started to collaborate with Jim Lansing of Lansing Manufacturing to design a speaker system that would change how people experienced audio. Douglas Shearer, the head of sound at MGM, caught wind of the project and put it into production immediately. The Shearer Horn was designed to be a new type of theater speaker which would replace the wide range speaker systems used in most movie theaters at the time. Due to their unique design properties, these speakers were revolutionary to the industry. Unlike big snail horns, which were used on wide range speakers, the Shearer Horn was built with a compression driver and a multicellular horn. Coupled with 15 inch cone speakers on either baffle, the overall efficiency of the Shearer Horn was staggering when compared to its predecessors.

The horn was first tested in the 5,000-seat Capitol Theater on Broadway.  After its stellar performance, the speaker system was then installed in twelve more theaters. Theater loudspeaker manufacturers soon adopted the Shearer Horn as the industry standard. In 1936 the Shearer Horn received a technical achievement award, which celebrates the accomplishments that contribute to the progress of the motion picture industry, from the Academy of Motion Picture Arts and Sciences.  The Shearer Horn started a new wave of thinking when it came to speakers, and surely the loudspeaker industry would not be where it is today without its development. 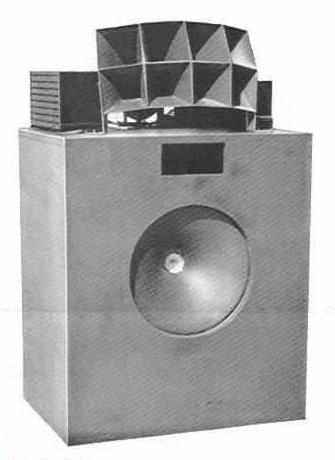 The Lansing Iconic high fidelity loudspeaker (1937) using the multicellular horn that was the form of the Shearer Horn.