Real music lovers can find the melody in everything. From the park to the concert hall, our friend Nelson Brill is always on the hunt for great sound. In this article, Nelson recounts a performance by artist Michael Feinberg at the Lilypad in Inman Square, Cambridge.

BASSIST MICHAEL FEINBERG AND HIS “HUMBLEBRAG” AT THE LILYPAD: CAUGHT IN GLORIOUS FLIGHT

Birding – a music lover/audiophile pursuit? Yes, indeed. In these early months of spring in Boston, birding is at its best: all sorts of migrations are occurring and you never know what surprise you may encounter around that next hedge. Birding opens the ears and the mind. If you bring a good pair of binoculars to your favorite park, pond or glen in an early morning or late afternoon, you will notice how your ears do not pick up many bird calls at first. Moving slowly and deliberately and keeping your ears focused on every nuance of sound, you will begin to hear things you did not before. After some time, you will be hearing new sounds coming from all directions and be able to pinpoint the call of that young yellow-throated warbler hidden in the thickets under your feet. Sit or stand quietly and the more you listen, the more you will hear and see: catch that rose breasted grosbeak just alighting on that pine branch at about 12 o’clock? See that flash of orange as that Baltimore Oriole streaks towards its hanging nest at 3 o’clock? Your ears are now truly open and your senses bring forth an astonishing new array of visual and sonic treats to behold. 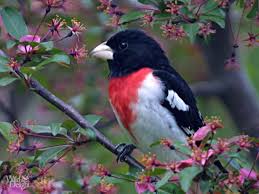 Bringing birding skills to the Lilypad in Inman Square, Cambridge, on May 8, 2014 brought many sonic rewards, especially when listening to the band assembled that evening under the keen eyes and ears of bassist Michael Feinberg. Feinberg has been on the radar for some time, after seeing him perform several years ago at the Beehive Restaurant in the South End, Boston and hearing his superb 2012 recording, The Elvin Jones Project [Sunnyside]. 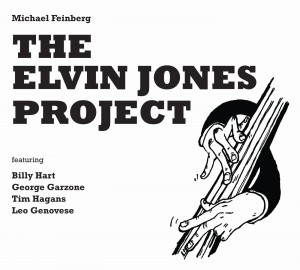 On that recording, Feinberg collaborated with some great talent, including drummer Billy Hart, local sax great George Garzone, trumpeter Tim Hagans and pianist Leo Genovese (also a local Berklee grad) for some funky and deeply meditative explorations. The recording is excellent, with an up-front perspective on all the action and a nicely layered soundstage. Using those birding ears, you can easily pick up every punctuated deep note from Feinberg on his bass pile driving the swing of “Miles Mode” (with a swashbuckling piano solo from Genovese) or the funky bop of “Taurus People” (with Billy Hart ratta-tatting away on his beautiful snare and Garzone’s sax big and full).  There are shifts to deep pools of sounds here too, on Elvin Jones’ “Earth Jones” and “It Is Written”: a slow revolving piece bending and swaying to Alex Wintz’s curling guitar motifs and Hagan’s soft cushioned tones from his horn.

At his Lilypad performance, Feinberg was showcasing a new formation in support of his just-released album, Humblebrag-Live at 800 East [Behip Records] and his tour in support of this new recording (check out Feinberg’s website for all details: www.michaelfeinbergmusic.com). 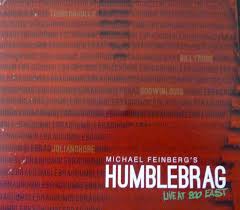 Feinberg’s Humblebrag band is once again chock full of great young musicians just itching to fly from the nest and spread their wings. Joining Feinberg at the Lilypad were pianist Julian Shore, drummer Dana Hawkins, trumpeter Jason Palmer and Godwin Louis on alto sax. This is a band made in hipster heaven! Shore is a superb pianist; he brings meticulous technique and an emotional depth to his piano playing that is fascinating to hear evolve. Hawkins brought his own snare to the Lilypad, and once set up, was on fire. He is a young drummer to watch out for-bringing great nervy urgency and roving meter shifts to his kit. Young Jason Palmer almost stole the show a few years ago at the Newport Jazz Festival when he was spied playing in Jack DeJohnette’s band. The guy has got soul all over his trumpet playing. Palmer can cascade sounds in a gleeful rush or burn slowly – never losing track of his melodic, soulful  grace. Finally, there is that firecracker Godwin Louis on alto sax. Louis brings more funk and glee to the proceedings as he amply demonstrated this evening at the Lilypad: big, brawny sound with volcanic technical skill. 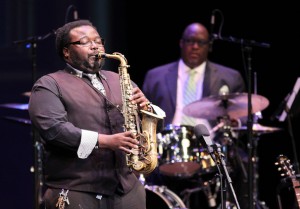 The band played “Duckface” (which appears on the new Humblebrag recording with Terreon Gully on drums and Billy Buss on trumpet) with tumultuous force, all funk and brawn. Like on the recording, Shore took off into a beautiful, interwoven piano solo, with leaps and bounds from sparkling high notes to low blustering bass chords. His unerring touch on the piano was extraordinary. Sparks flew (like the sights of those bright orange orioles in the trees around town) in Palmer and Louis’ takes – full of furious scaling that always led back to the nest of first melodic ideas. As on his latest album, Feinberg here laid into a funky, soulful bass solo. The sound of his bass at the Lilypad was not bad- especially given the intimate confines of this listening room. (The management has now put in some good dampening materials along the walls of the room that have made for some improvement in these areas of bass bloat and drum overpowering sound in this small, inviting space). The Humblebrag recording (recorded live in a small Atlanta studio which Feinberg speaks of with gratitude for its cooperative structure for artists) captures beautifully all of the sass and funk of “Duckface,” with a warm and spacious soundstage and a nice up-front perspective to Louis’ funky sprawls on his alto sax.

The band also stretched out on “The Hard Stuff,” a rough and tumble outing with a big rock rhythm foundation and off-kilter solos bouncing off  Feinberg’s bass backbone. Hawkins brought a huge sound to the proceedings (like a hawk brushing away all crows chasing him into the trees). His furious stick work was rock solid and cataclysmic, always with an ear to bringing the funk and heady bass drum to the fore. Palmer also added a sassy solo with that special way he has on the trumpet with seeking a soulful tone amidst the launch of prickly runs. 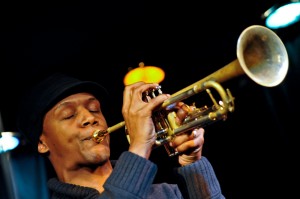 This piece reminded of the bright and shining title track that closes Feinberg’s Humblebrag recording. Here is a intriguing original composition from Feinberg that melds together a stream of influences (rock, soul and swing) into an exhilarating confection. The piece fires away with the front line punctuating forth in metallic flare, leading into a curvaceous solo by Louis, all nimble and spry. Gully and Feinberg maintain a heady rock foundation while Buss’s trumpet pushes the envelope with piercing hits and elasticity up and down his instrument. The recording captures this solo with all of its clarity and blaring metallic energy. Shore brings it down to a quiet, contemplative moment with his laconic, resonant touch until the buoyant melody erupts again.

There’s a celebration, a funk and a love in everything that Feinberg composes. He’s a guy to keep a pair of binoculars on. Ample rewards await for those (with ears open!) who scope Feinberg and his bandmates out through the trees.