Real music lovers can find the melody in everything. From the park to the concert hall, our friend Nelson Brill is always on the hunt for great sound. In this blog, Nelson takes a closer listen to blues music as it inspires choreography, plays in our home systems, and is performed in concert.

THE BALM OF THE BLUES-PART 1 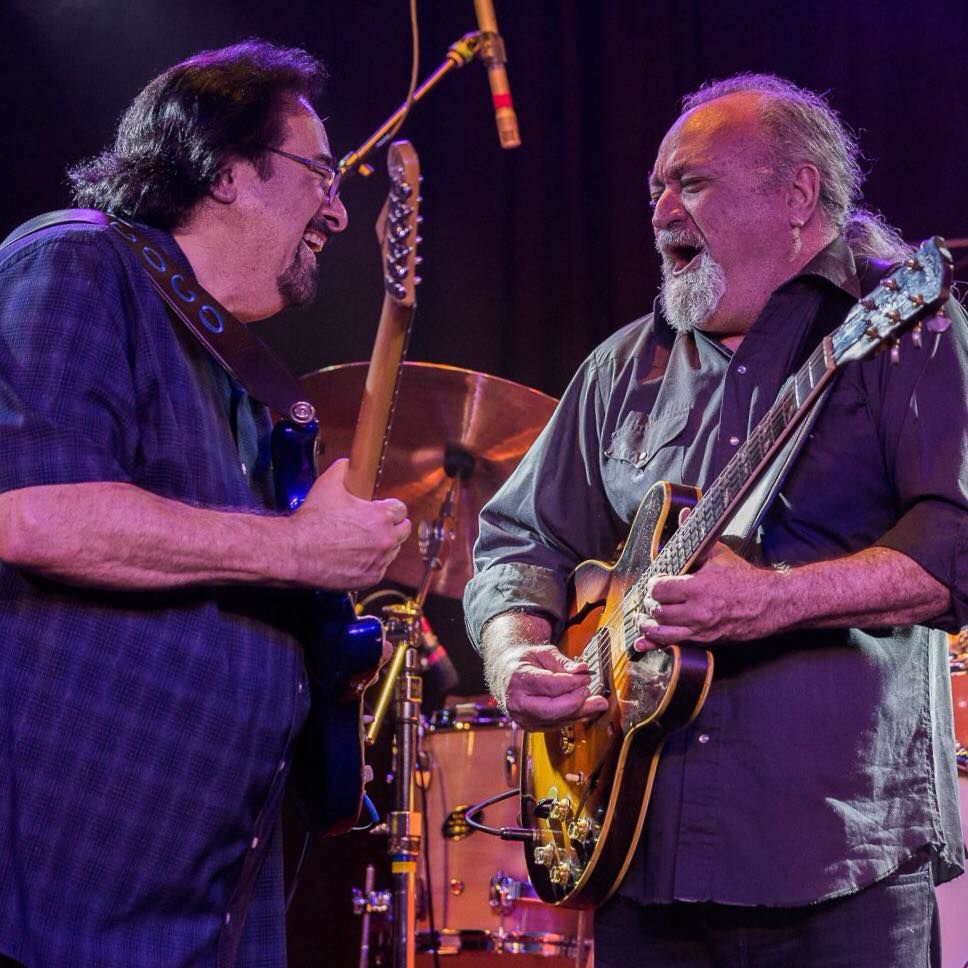 The blues continue to inhabit our musical lives, enriching and uplifting our spirits and keeping us in stride in these difficult political times. One enduring example of how the blues are a spiritual balm (and continue to move people forward) is found in the radiant choreography and dances performed by one of the world’s treasured dance companies, The Alvin Ailey American Dance Theatre, (“Alvin Ailey”; http://www.alvinailey.org). Alvin Ailey celebrated their 60th anniversary with a series of performances held at the Boch Center Wang Theatre on May 2nd through May 5th, presented by Celebrity Series of Boston (http://www.celebrityseries.org). 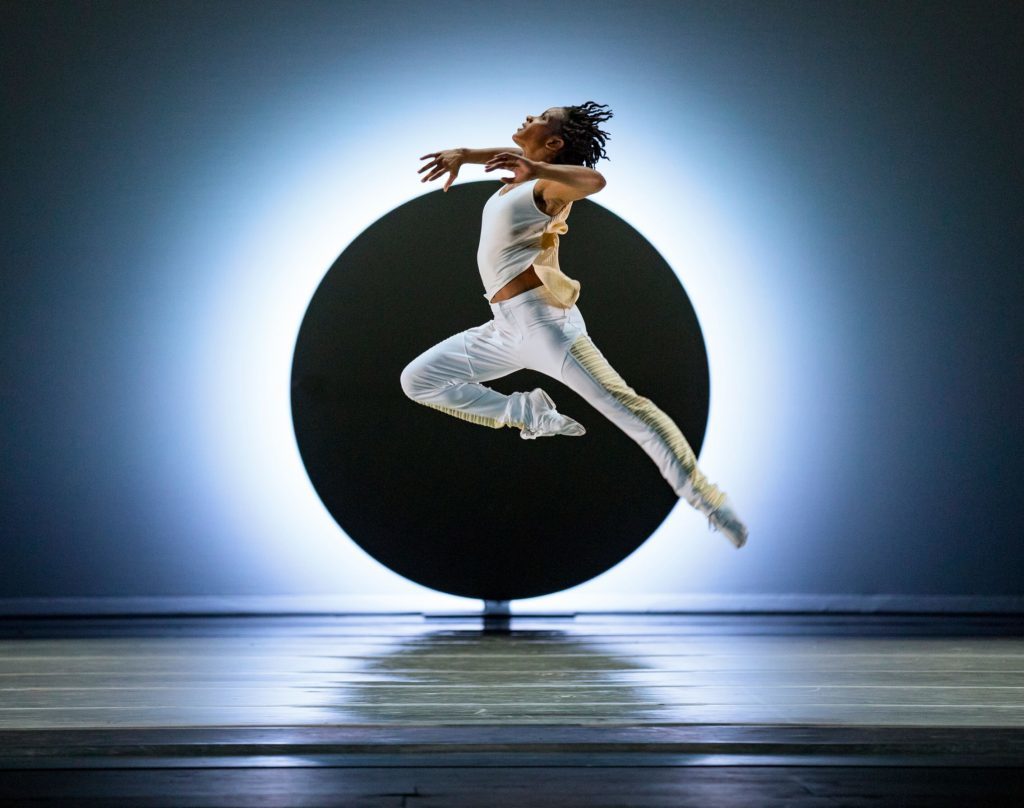 Since its world premier in 1960, Alvin Ailey’s signature masterpiece, Revelations, (choreographed when their founder was only 29 years old) has been performed around the globe. To commemorate its 60th year, Alvin Ailey performed Revelations to conclude each of its Boston programs. Revelations is an intimate reflection upon Ailey’s childhood growing up in Texas, deeply influenced by his church, its music and the writings of Langston Hughes and James Baldwin. The first scene, (which Ailey described as “getting up out of the ground”) finds a group of dancers dressed in earthen tones aligned in a tight circle. The group raises and lowers its arms and limbs to create a slow-motion wave of rising and falling bodies, like a flock of birds gathering into the sky from some low point in the earth. This evolving action is propelled by music from Ailey’s childhood: church spirituals deep in their majestic pulse and brewing fervor. 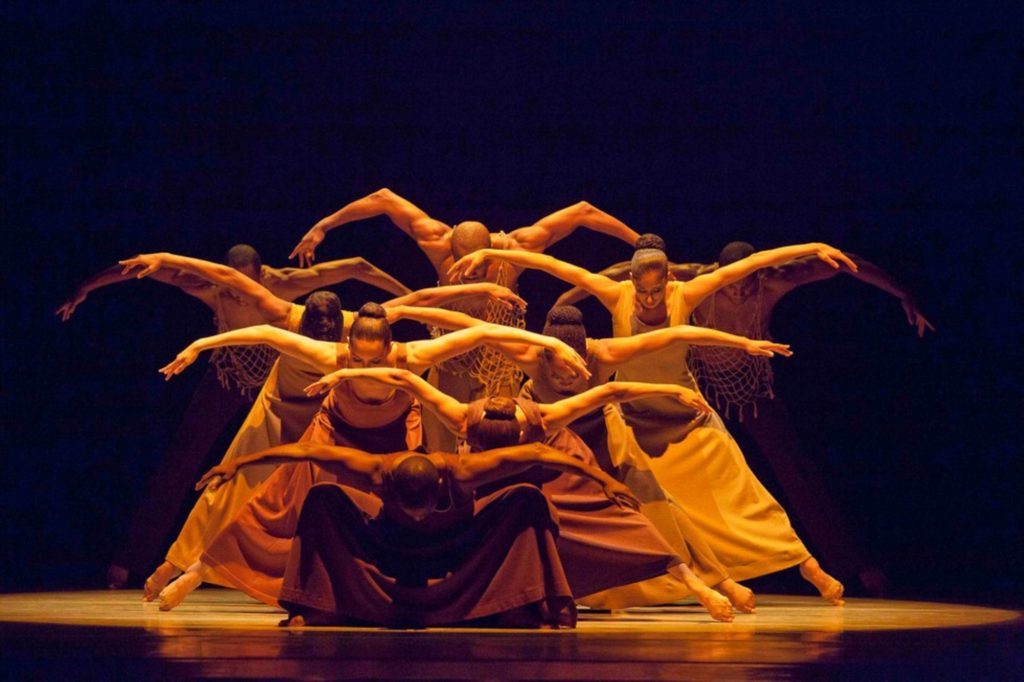 In later scenes, male dancers stalk the stage in long, leaping bounds to the striding spiritual, “Sinner Man,” or flow in swirling, entwined pairs to the uplifting pulse of the spiritual, “Wade In The Water” (dipping their toes in flowing blue fabric as it is stretched across the stage). 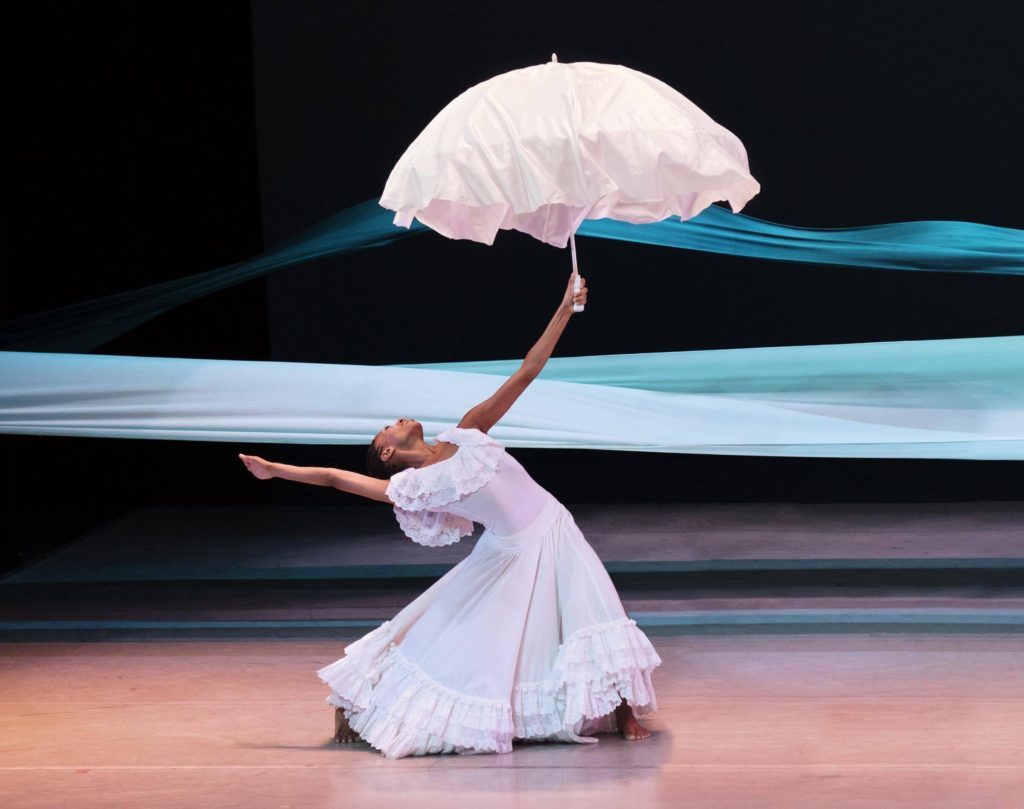 The final scene of Revelations is a dazzling frolic where dancers twirl, swirl and partner in high-stepping glee in celebration of life, love and joy– all to the booming sounds of the spiritual, “Rocka My Soul In The Bosom of Abraham”. The capacity audience at the Boch Center leapt to their feet at the conclusion of Revelations (clapping and singing along to “Rocka My Soul”) clearly moved by the brilliance of the dancers and Ailey’s vision: from sorrow to spiritual uplift in the comforting embrace of the blues. 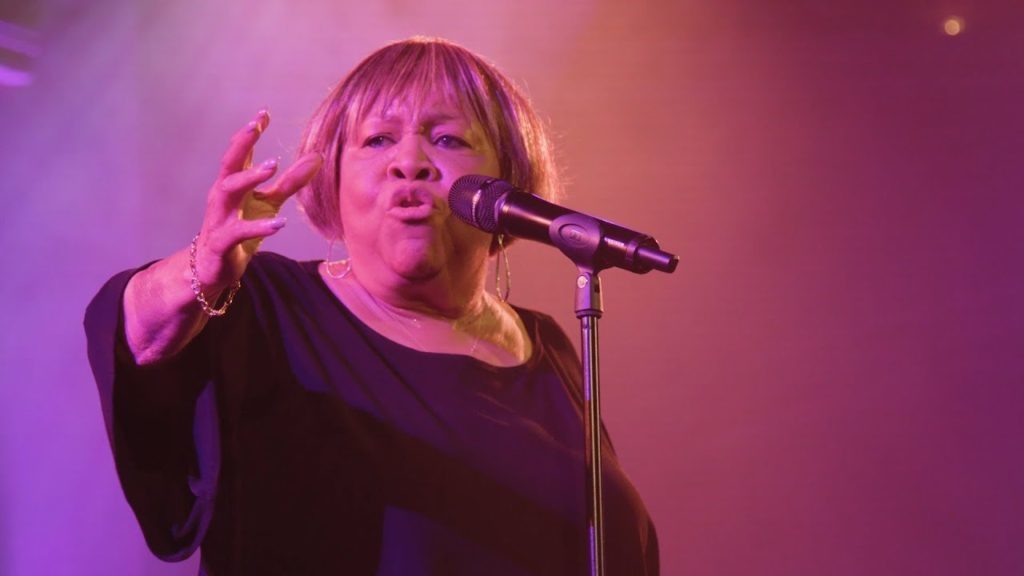 Seeing Revelations performed after so many years inspired me to listen to one of my favorite audiophile recordings of powerful traditional spirituals re-arranged in brilliant fashion by singer Mavis Staples, herself a veteran of the civil rights struggles and a treasured voice today in the fight against racism and inequality. 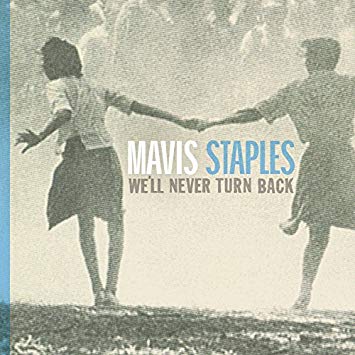 On her incendiary recording from 2007, We’ll Never Turn Back [Anti Records CD] Staples and her kinetic band, (which includes producer Ry Cooder on guitars and mandolin) pounce on such traditional songs as “Eyes On The Prize”; “This Little Light Of Mine” and “Turn Me Round” and ignite them into molten-hot music, demanding to be heard. Her original, “My Own Eyes” is another stunner: her own musical version of Revelations as she marches through her own civil rights movement history with her father, Pops Staples, as her inspiration. Her band is a churning boogie of blues and toe-tapping power. Mavis’ guttural growls; her deep gospel vocal plunges and her soaring chants are captured radiant, harmonically rich and kinetic on this great recording, ensnared in an airy soundstage swept by the layered, resonant sounds from her tightly grooving band. This is how a blues album should to be recorded, without the hyped-up treble and thinness of so many marred blues recordings I have heard.

There’s no stopping the 79-year old Mavis and her fiery blues: she has come out with a new album, Live In London [Anti Records] and is set to release another new recording soon. 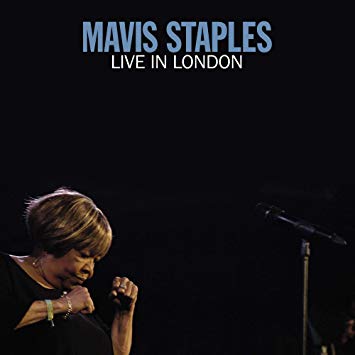 Her Live In London is another shot of gospel and blues messages (straight to the political heart) with her band captured up-close in searing flow at London’s Union Chapel. Mavis’ voice is still a gale force, (captured a bit thinner here than on We’ll Never Turn Back) with guitarist Rick Holmstrom fierce on his unleashed guitar solos – boisterous and brightly lit – as the charismatic Mavis shouts out: “We’ve got work to do!” 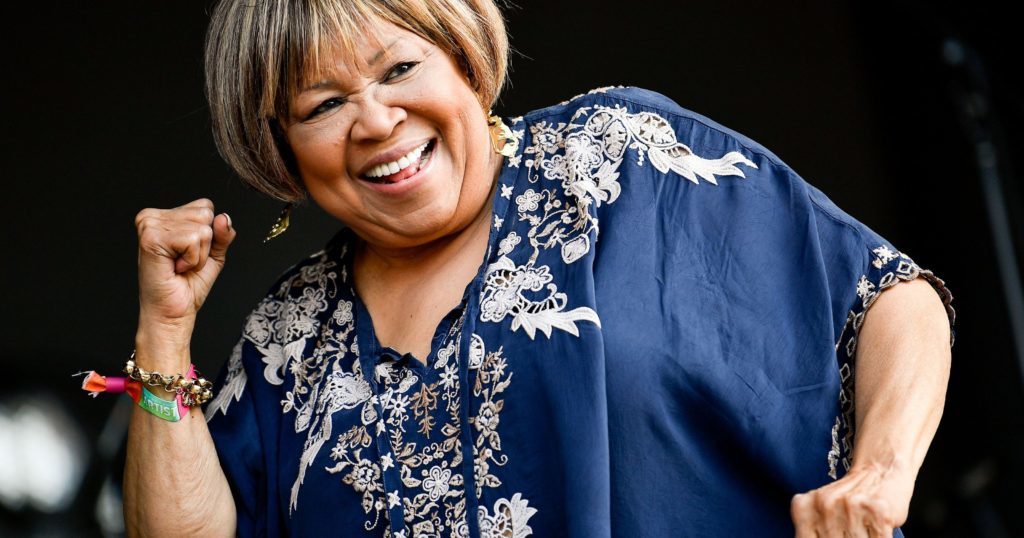 The first of these concerts was a magnetic gathering of blues musicians to honor the legacy of brilliant bluesman James “SuperHarp” Cotton (1935-2017). This tribute concert was held at the Narrows Center For The Arts in Fall River, MA. (http://www.narrowscenter.org), a venue for live music that is always reliable for its good sound and its welcoming community feel. The show was hosted by Boston rocker and harpist, James Montgomery, and Holly Harris, host of Boston radio station WUMB’s blues show (http://www.wumb.org). Fittingly, an empty chair was kept onstage for Cotton (in case his spirit come by for a listen, as Montgomery urged). 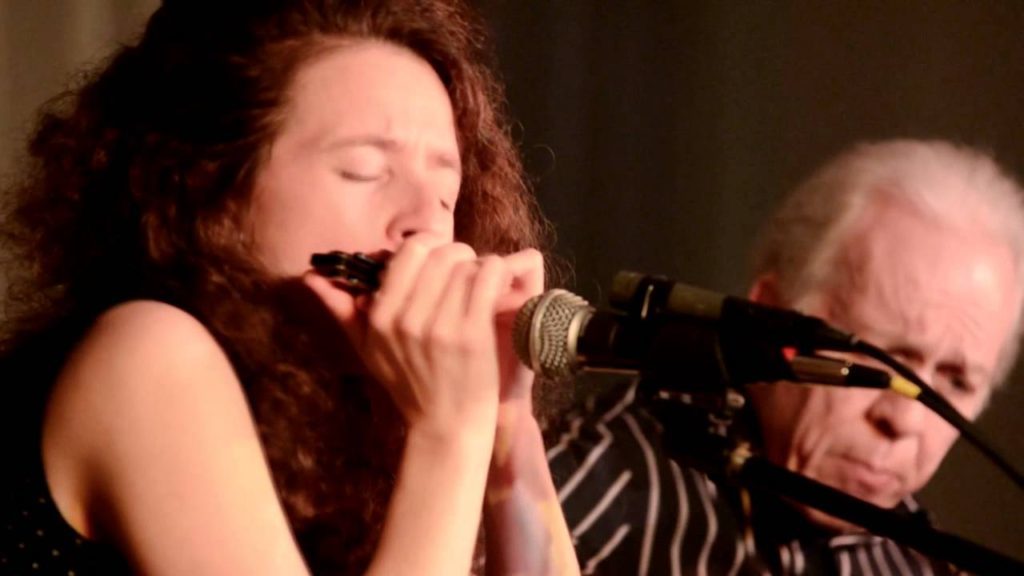 Longtime Boston blues legends Annie Raines and Paul Rishell opened the show with their sparkling presence, plying their harp, guitar and vocals in delicate sprays of notes on their sparkling “Got To Fly!”. Harpist extraordinaire Jerry Portnoy moved to a different groove with a silken fluid softness to his harp, pushing it to a regal bluster when fully launched. Harpist Rick Estrin, adorned in a silver suit, took off like a rocket on his harp: snarling, blurting down deep and at one point, holding his harp in his mouth lengthwise (without any use of his hands!) to shimmy and shake his body to his cascade rockous of sounds. 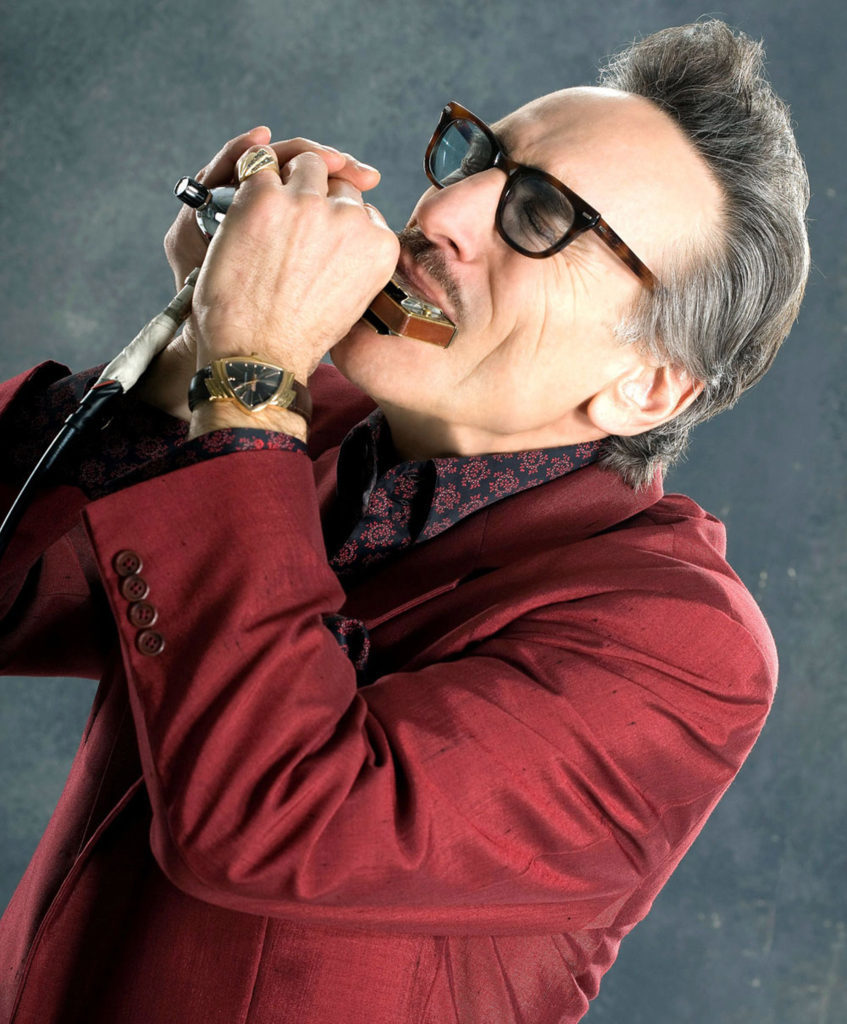 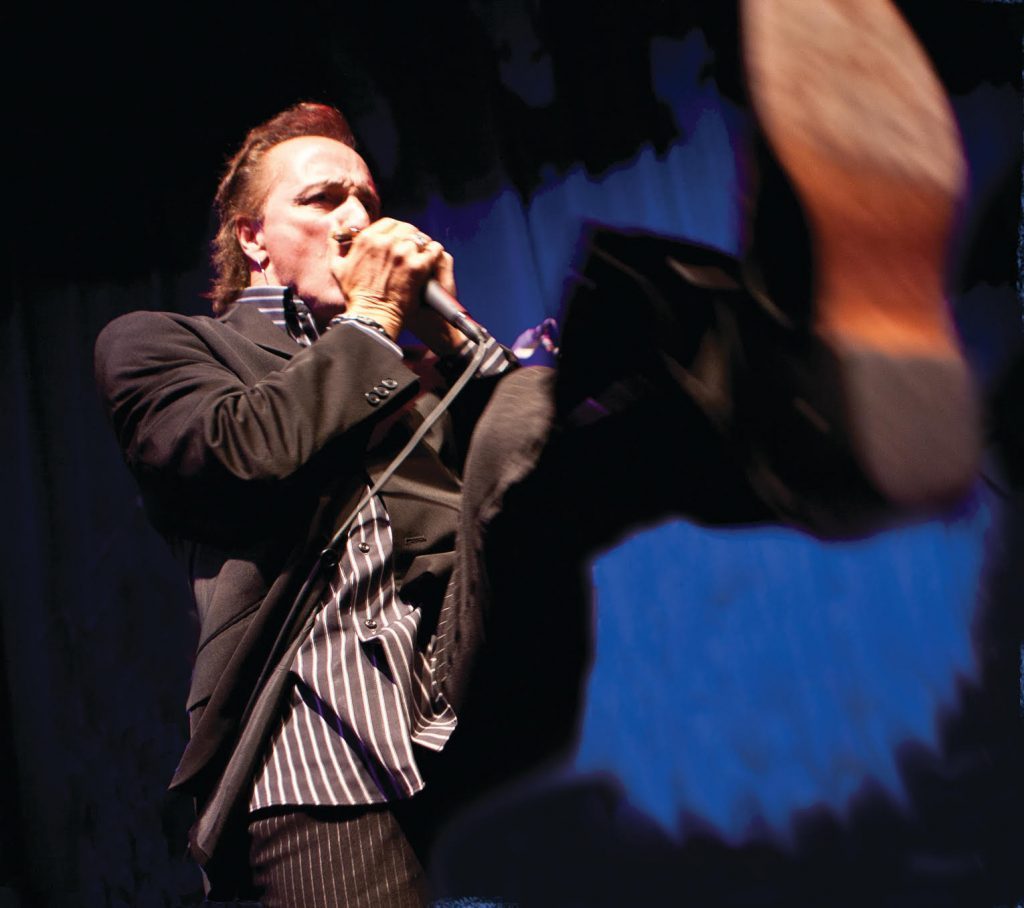 The bands that accompanied these gifted harp players were also on fire (inspired by Cotton’s spirit) led by James Montgomery’s charismatic and muscular presence on his harp (leading his own boisterous band) and with guitar greats Kenny Neal and Darrell Nulisch adding their own urgency and funk. Another highlight was the reunion of Cotton’s touring band who delivered a slinky-tight rocking focus to the celebration. The finale was a roaring version of Cotton’s classic, “The Creeper”, where everyone gleefully piled in. On this last tune, Cotton’s guitarist, Rico McFarland, jammed with several harpists, including the roguish Mark Hummel, who unleashed a torrent of sounds from his harp (piercing high and mercurial), next to McFarland’s tightly churning guitar. 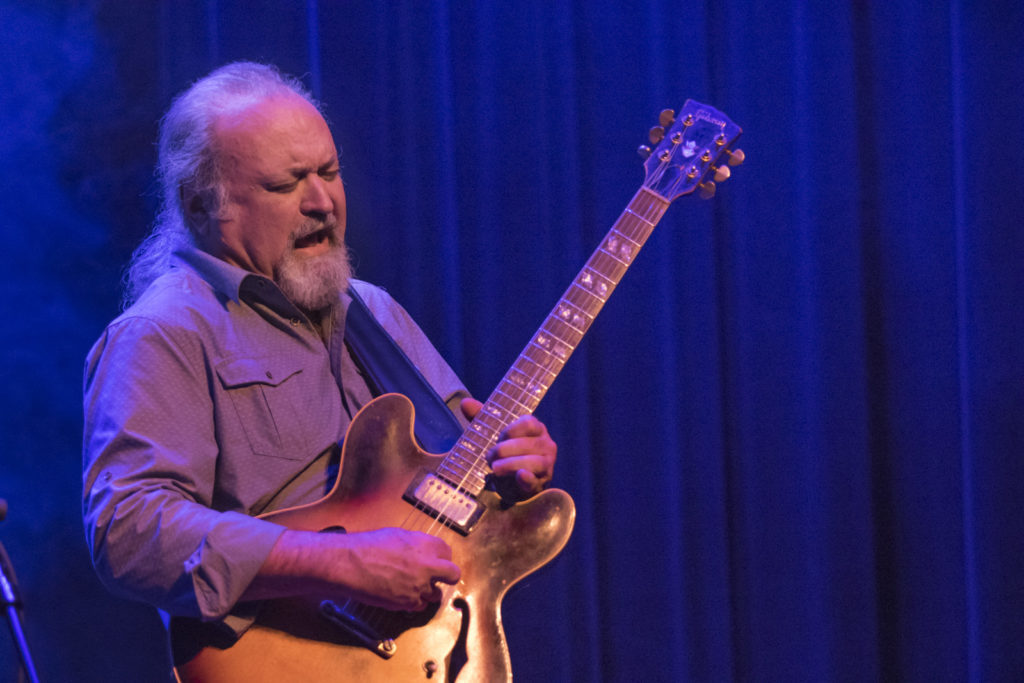 James Cotton’s spirit also infused another Boston concert of feisty Chicago and jump blues glory. On March 28th, guitar legends Tinsley Ellis, Coco Montoya and their stellar bands played a fabulous double bill at The Center For The Arts In Natick, MA. (“TCAN”; http://www.natickarts.org). TCAN is another stellar venue in the Boston area for getting up close and personal with live blues because the venue is intimate, welcoming and reliable for providing excellent sound. 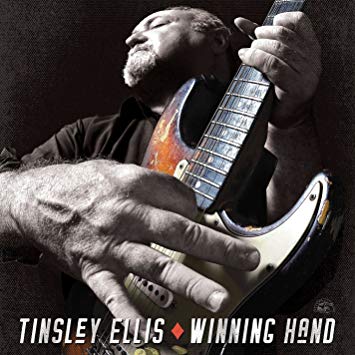 Tinsley Ellis and his power trio (bassist Devin McCann and drummer Eric Dravinsky) opened the show with their spirited combination from Ellis’ southern rocking roots to his smoldering Chicago style blues. Ellis is the total blues delivery system. He possesses a big, expressive voice that invites you into the drama of every song. On his opening “Sound of a Broken Man” taken from his new album, Winning Hand [Alligator Records; http://www.alligator.com], his rounded baritone was full of bold expression as his guitar leaped and stung in short bursts around it. Hearing this tune live was much more satisfying than on his CD because, for whatever reason, the blues hero label, Alligator Records, continues to produce magnificent artists with sound that is frequently pop- thin on vocal richness and instrumental tones, along with, at higher volume, treble glare. (Their LP editions tend to be slightly better in this regard). Winning Hand suffers from this same fate, particularly on Ellis’ high guitar notes, recorded thin and unnaturally wiry, instead of tonally substantial and glowing. 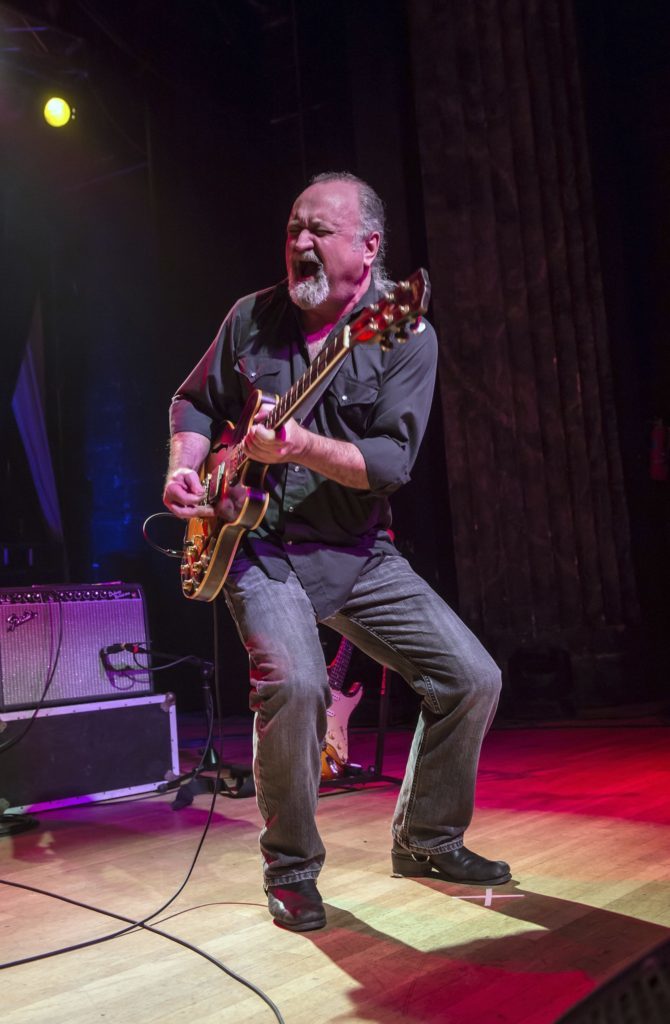 Back at the concert, on his sterling “Gambling Man,” (also from Winning Hand), Ellis sang high and fervent with a great feel for the slow brewing nature of this gem as he let it evolve from a pulsating surge to a rumbling furnace of guitar soars and bass drum heat. Ellis’ guitar styling was a perfect foil for his expressive vocals. For instance, he held onto low guitar notes seemingly forever, (like relishing the burnt ends of barbecue) then slid up his neck to scorch high notes and bends. He also loved to let his fingers fall precipitously to create a swift “zing” of metallic sounds. These were all showcased on his fantastic slow cooker, “Saving Grace,” (also from his new album) and on the rocker, “Cut You Loose”. On this last leaping number, Dravinsky’s closed hi-hat and McCann’s bopping bass propelled Ellis into a dancing ride, (hitting sly string bends and quick twisting holds up top), as his expressive vocals ran perfectly in their stride. 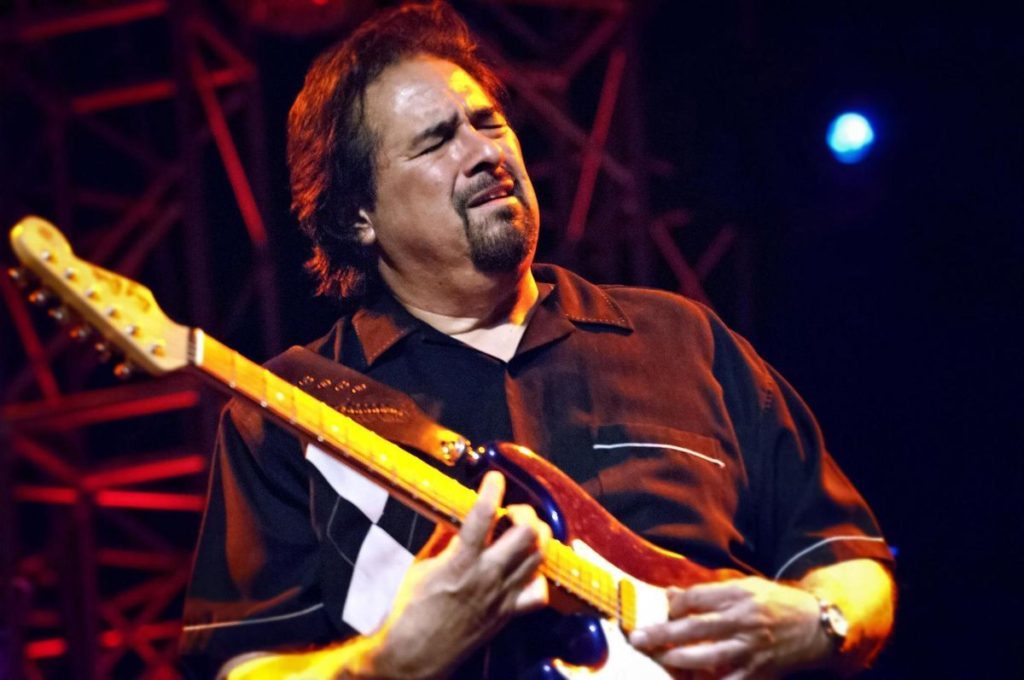 With his own bolt of lightning, guitar legend Coco Montoya swept onto the TCAN stage with his band (Eric Robert on keyboards, Nate Brown on bass and Rene Beavers on drums) and took off with their own stew of Chicago blues funk and swing. Their version of a Sly Johnson song was all slinky funk with rolling bass lines, Montoya’s stinging guitar and Robert’s juicy keyboard romps. Robert was a showstopper all night on his electric keys. He provided rolling and glittering piano grooves to shake the walls of “Love Jail” (written by Montoya for his mentor, Albert Collins). On Montoya’s rolling and grooving “Tumbleweed”, he washed the length of his keyboard with dashing flourishes and tight barrelhouse runs. 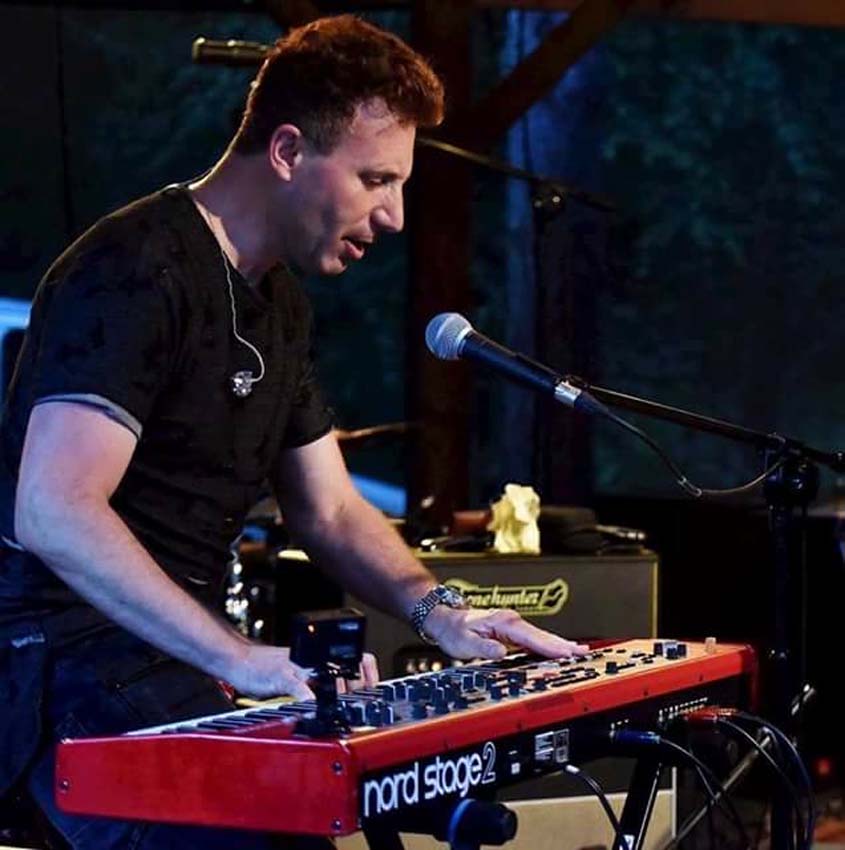 With his guitar nestled against his large frame, Montoya moved effortlessly from jazzy rifts to stinging holds, always on the lookout for another creative riff or bright-hued line. Like a kid, he sometimes gleefully discovered a simple combination of notes or chords which he decided to churn, over and over, to create this rush of crashing sounds and a crescendo of colors. His vocals were a bit thin and less expressive in character than Ellis’, but there was no stopping his enthusiasm for the sharp concise whip of his guitar solos or his elemental back-beat.

The concert’s finale, where both bands took the stage, was an electrifying moment. Ellis and Montoya dueled side by side; each taking a turn. They started deliberately and slowly, feeding slow funky patterns (with Ellis slurring notes and Montoya stinging isolated notes). They then took off on a collective soar, (with their bandmates riding the groove effortlessly), into a gallop of jazz rifts, furious blues swing and cataclysmic high holds that had the capacity crowd on their feet roaring their approval.

If you would like to read Part II of The Balm Of The Blues, or more of Nelson’s blog reviews, visit www.bostonconcertreviews.com.