Real music lovers can find the melody in everything. From the park to the concert hall, our friend Nelson Brill is always on the hunt for great sound. In this blog, Nelson gives you a more of a global look at what is going on in the music world as he covers some recent shows and recordings he discovered on his recent travels! 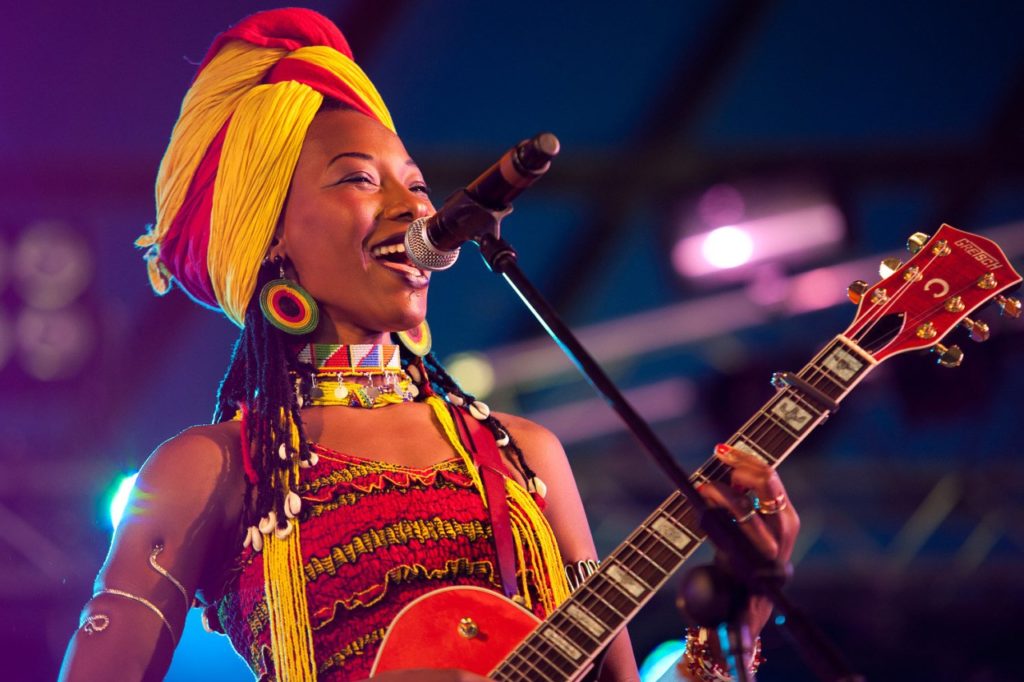 When I am traveling to a different place, I always like to explore the neighborhoods with local record stores to support local businesses. I like to check out these shops’ record bins for new artists that reflect the music scene in that area. So while I was in London recently, we ventured to nearby Brixton where the UK reggae scene has had a rich history, supported by vibrant immigrant community (where you can get a great Ghanian stew or Ethiopian meal on a Brixton street corner or in one of the town’s many markets). 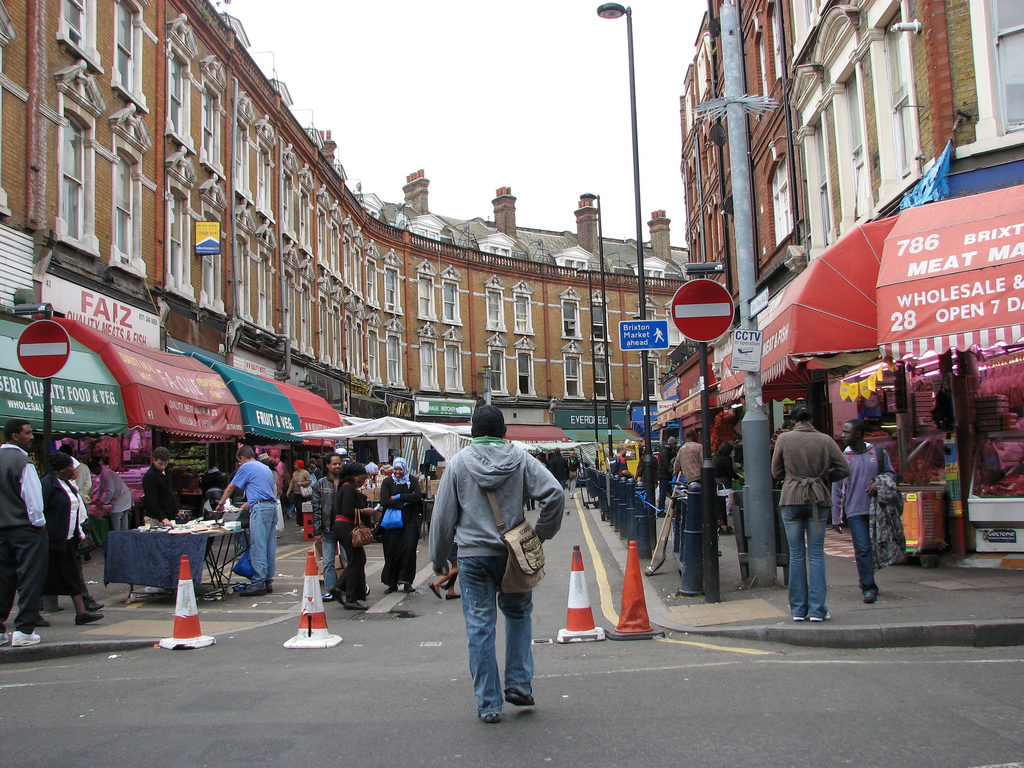 I happen upon a small record store in one of these Brixton markets, run by a local legend, Jah Lingua, “Markie”, who is founder of Universal Roots Records [http://www.facebook.com/UniversalRootsRecords] which has been producing recordings from local reggae artists since 1998. 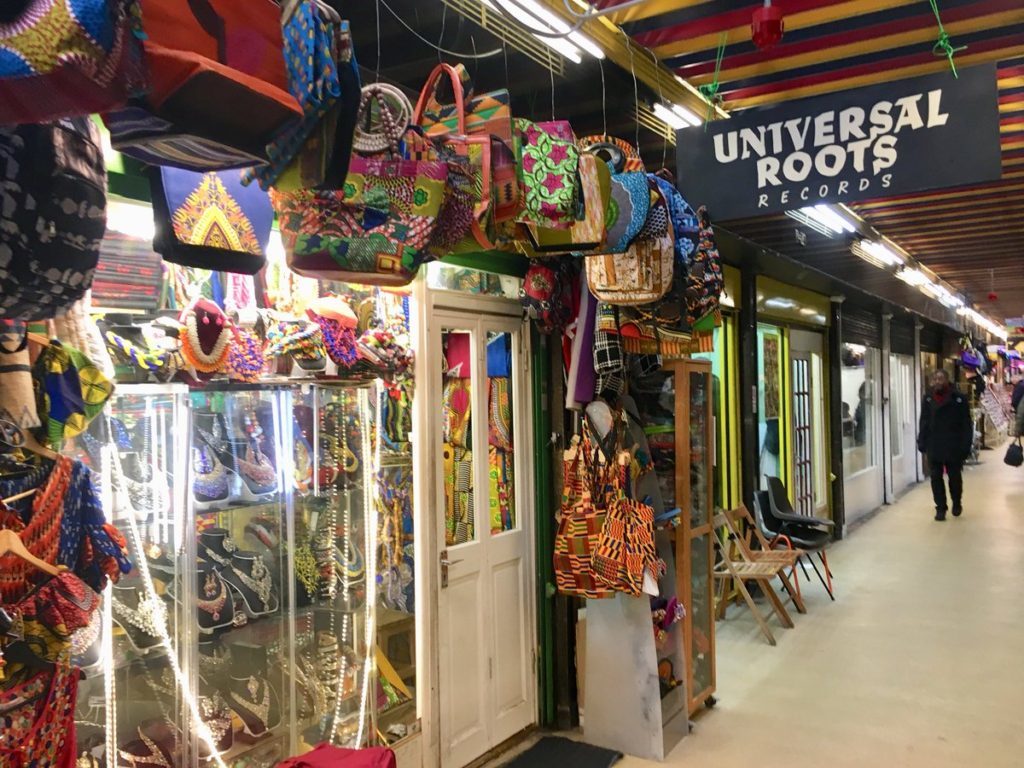 Jah Lingua also hosts “R.D.K. Hi-Fi Dances”, (along with his spouse, Claudia, at her Brixton record store, Pure Vinyl Records) where local reggae artists perform on sound systems set up for dance parties. Jah Lingua passed along to me a copy of his CD, U.K. Reggae Stars [Universal Roots Records] and an LP produced by him in 2018 with selections from local artists with “Brixton Downbeat”, “Gentrification Dub” and other great cuts. 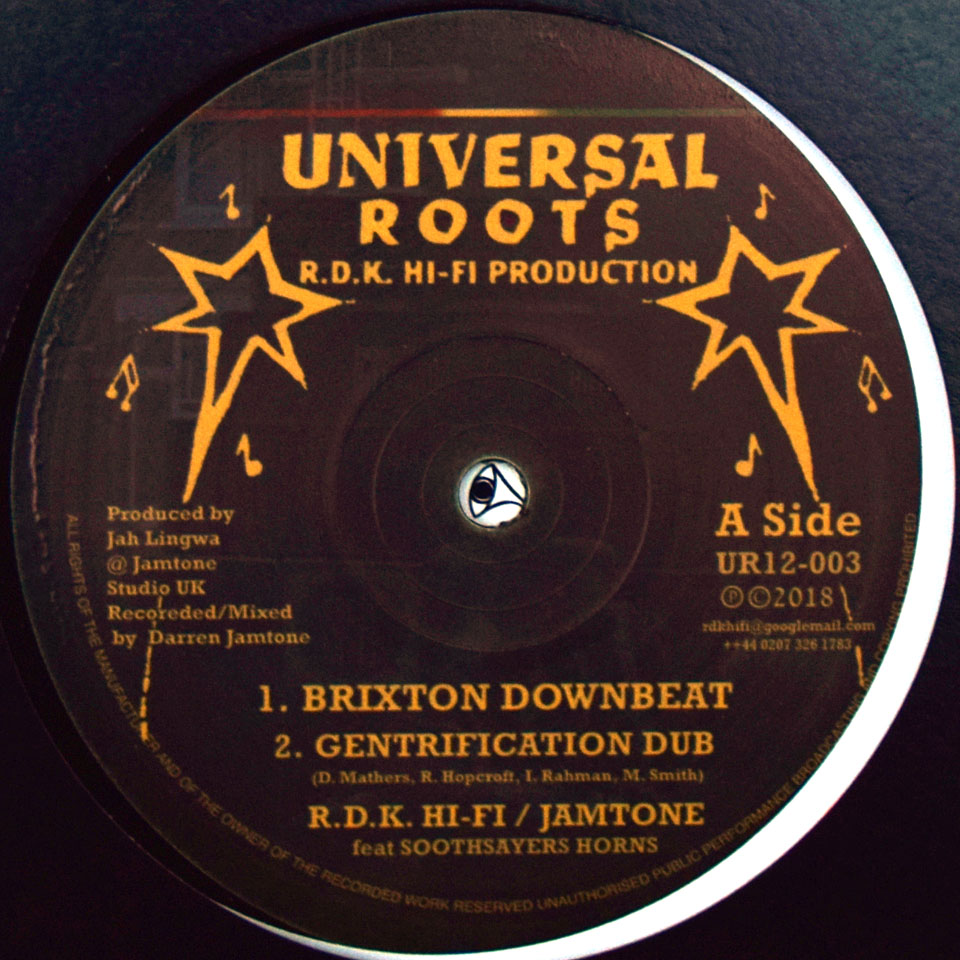 On these Universal Roots LP and CDs are the sounds, among others, of Brixton’s own Soothsayer Horns (a swanking brass ensemble); Sandeeno (a vocalist with an expressive baritone to match his messages of fighting racism and gun violence) and two female vocalists, Marlene Ammers and Judith, both with airy, swaying presences. These gifted artists are surrounded on these excellent recordings by local bandmates who deliver pungent bass lines; creative waves of electronica and dynamic percussion. Reggae’s joyful funk and lift; its warmth and dance and its unflinching social-conscious themes – all are here on these excellent spirited recordings from Universal Roots Records reflecting the diverse Brixton community. 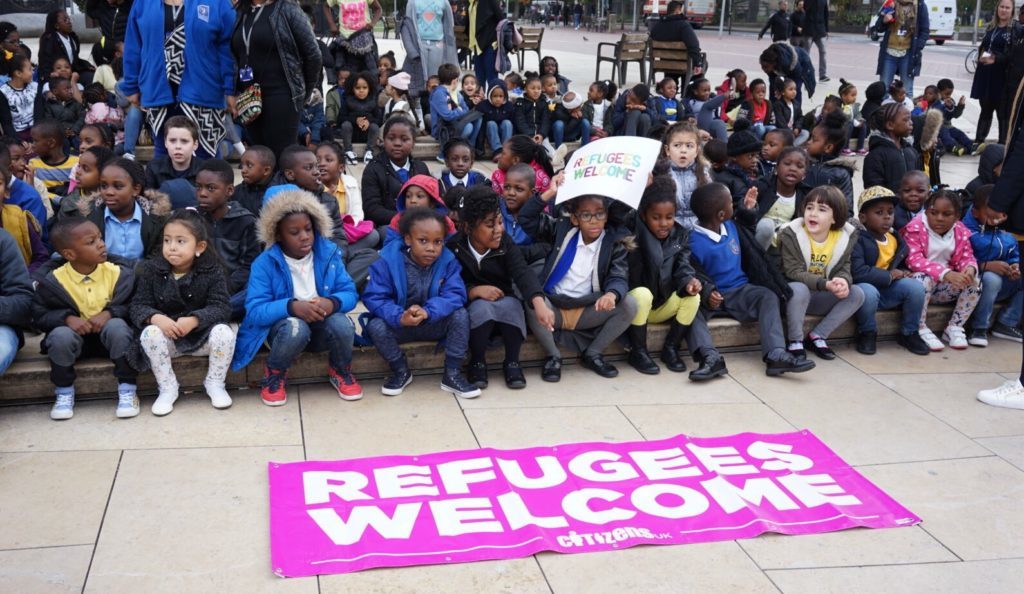 This vital connection between Caribbean and African musical heritages continued when I had the lucky opportunity, on February 23rd, to visit the venerable New York City music venue, The Jazz Standard, (located at 116 East 27th Street; http://www.jazzstandard.com) to catch a dazzling concert by the Spanish Harlem Orchestra, (“SHO”) [http://www.spanishharlemorchestra.com ], a band that delivers their own incendiary mix of cha-cha-cha, mambo and salsa brilliance. 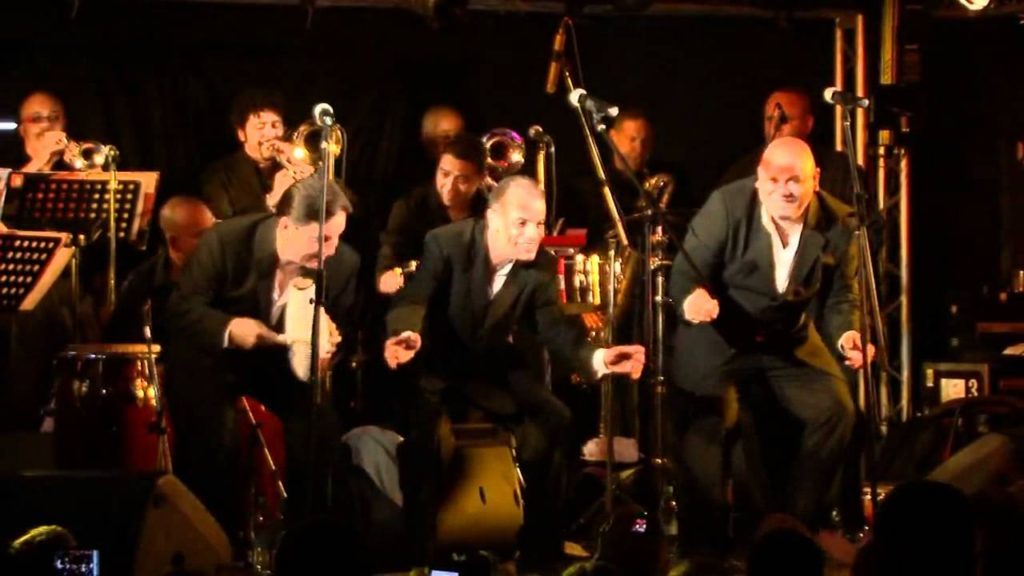 From their first fiery notes, the SHO proved to be a tight, dynamic band that wasted no time in igniting their propulsive songs drenched in their Puerto Rican heritage. The sound at the Jazz Standard was up to the task as most instruments on the crowded stage were heard clarion and true, with exception of piano and bass, which were a bit harder to hear individually in the heated big band action.

The SHO focused their Jazz Standard performance on numbers taken from their new action-packed recording, Anniversary [ArtistShare], which has just won a Grammy award. 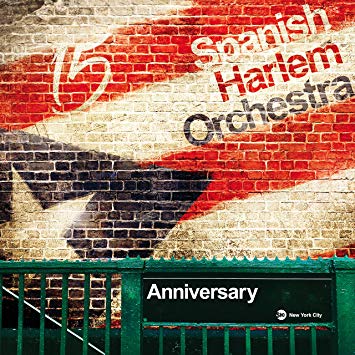 The recording captures the SHO with great energy and upfront crackling presence. While delivering the heat, dance and punch of this swanking band, its sound is on the lean and sometimes thin side (especially on brass crescendos) and does not offer much in the way of layering or depth to its soundstage, so things are a bit congested. But what the recording offers in spades is the stellar musicianship of the band and a feel for their dancing interplay, as well as the jovial spirit of the band’s three fronting vocalists: Marco Bermudez, Carlos Cascante and Jeremy Bosch. 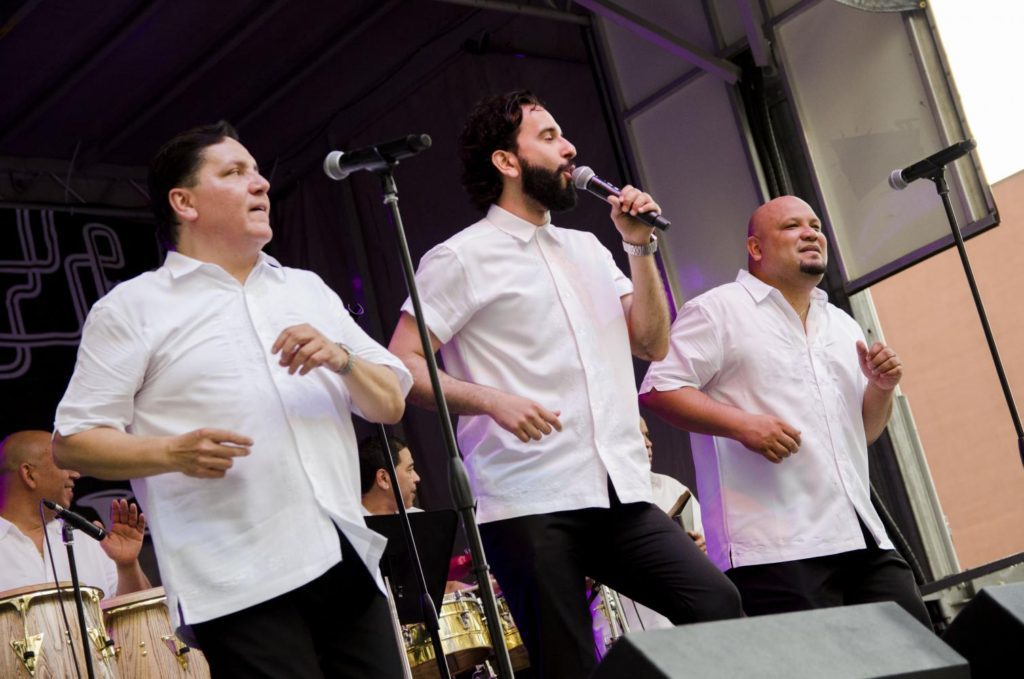 At the SHO’s Jazz Standard concert, their three charming vocalists hit the ground running, with the band carousing behind them in soaring strides. Bermudez’s voice is gliding and smooth and it sumptuously drove his suave song, “Echa Pa’Lante”, accompanied by brazen choruses from trumpeters Manuel Ruiz and Hector Colon and driving wooden strikes from Jorge Gonzalez’ resonant guiro. Bosch possesses a lighter, more carefree voice, telling his tales with a spoken quality. On his “Soy El Tambor,” his vocals were complemented by George Delgado’s lilting conga and Luisito Quintero’s punctual timbales. 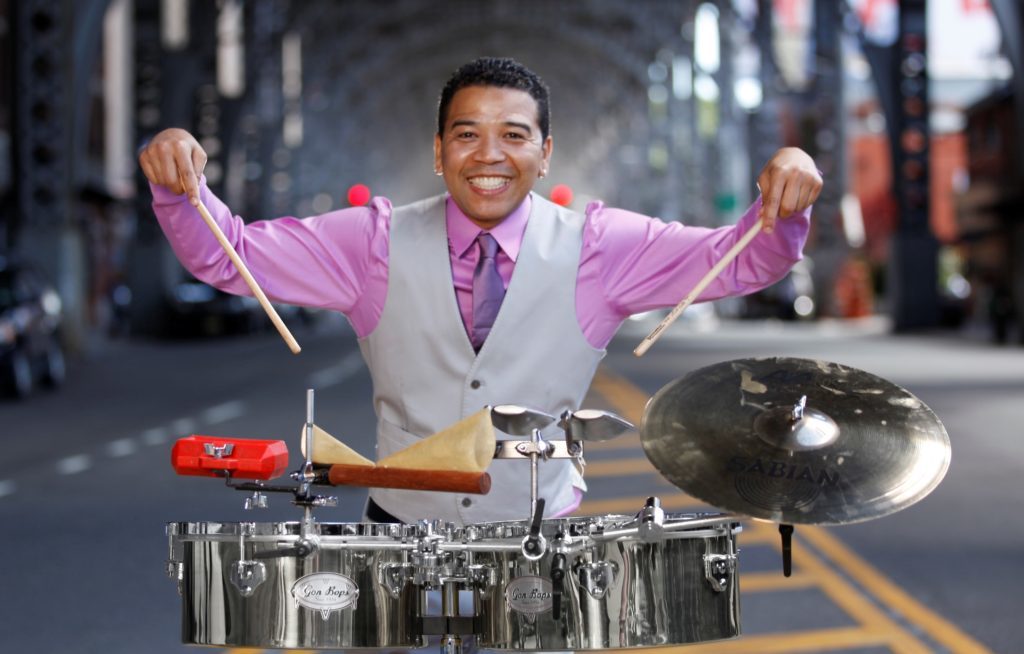 Quintero was a whirling dervish on his timbales all night. He hit explosive wooden cracks by frenetically playing all surfaces of his drums, including hitting the sides of his timbales with his drumsticks sending crackling wooden blasts to the back walls of the Jazz Standard.

On another ballad, Bosch took up his flute and played a dazzling duet with flutist (and baritone saxophonist) Mitch Frohman, layering their spirited high runs and leaping octaves in a shimmer of light colors (that had the crowd roaring their approval). 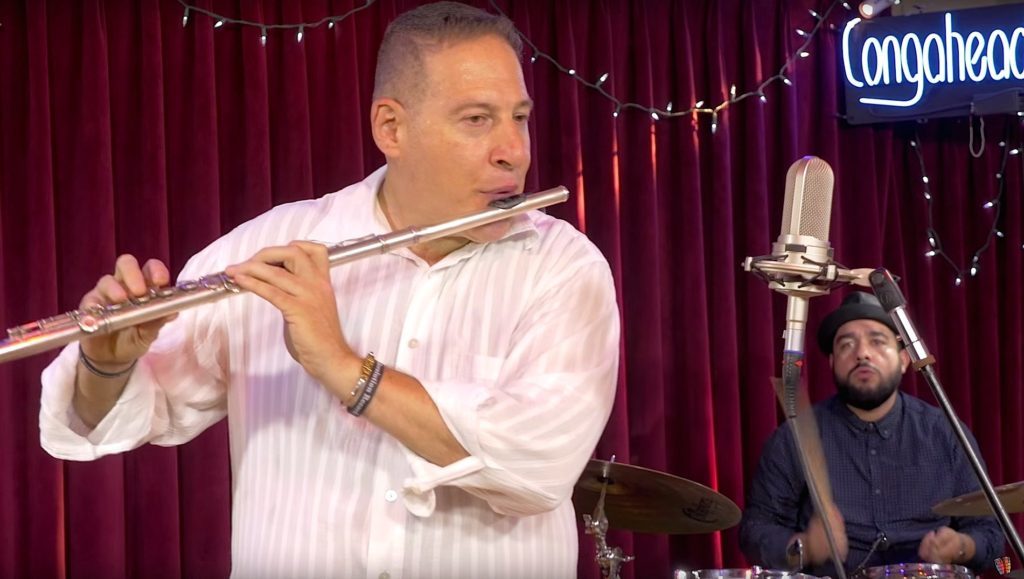 On “Cancion Para Ti,” Frohman’s flute was complimented with lilting chords and touches from Oscar Hernandez’s piano. Hernandez was always at the ready to lend a dancing frolic or the twinkle of a mambo beat. His solo piano ranged far and wide on “Como Te Quise” joined by vocalist Carlos Cascante, whose ardent vocals were steeped in metallic glow from Doug Beavers’ and Noah Bless’ trombones. The SHO built to a final crescendo of brass calls and vocal harmonies, (with cries of “Viva Puerto Rico!” echoing through the capacity crowd). Their final songs swayed on salsa flow, with cowbell and timbales firing on all cylinders to propel intoxicating grooves and dance steps into the night.

This global-minded, (perfectly fused) connection between African and Caribbean music was also at the heart of another astonishing concert that I attended recently in Boston, presented by WorldMusic/CRASHarts, [http://www.worldmusic.org ] a nonprofit arts organization that has brought the richness and diversity of global music to Boston area audiences for many years. 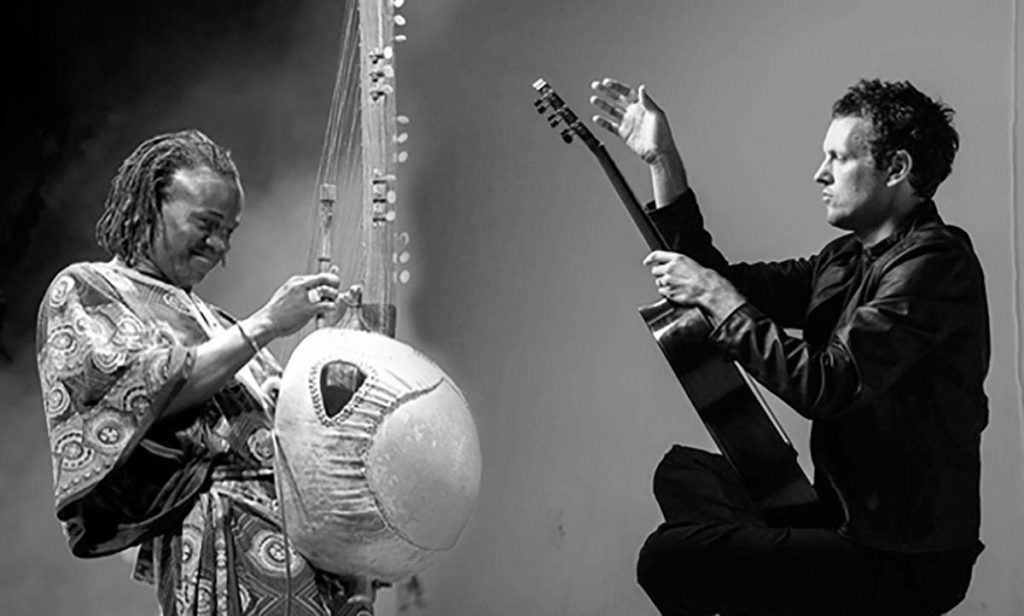 The evening was a feast of acoustic glory. Gripper and his African Strings opened the show, delivering their sultry lightness on guitars, kalimba, kora and on a Ugandan traditional stringed instrument called the endongo. (The endongo was plucked masterfully by Kinobe, a Ugandan musician, who also possessed a beautiful expressive voice). The group’s instrumentals were propelled by Gripper’s classical guitar style, flowing with light percussive touches and crisp nylon string runs. Unfortunately, the sound mix was a bit skewed in that Gripper’s guitar was overly dominant and so it was harder to hear the gentle soft strums of his partners’ instruments. When they could be heard clearly, Jaja Bashengezi’s accompanying guitar was a light caress and Kinobe plied his kora in sparkling fashion, projecting his notes like soft, falling raindrops. 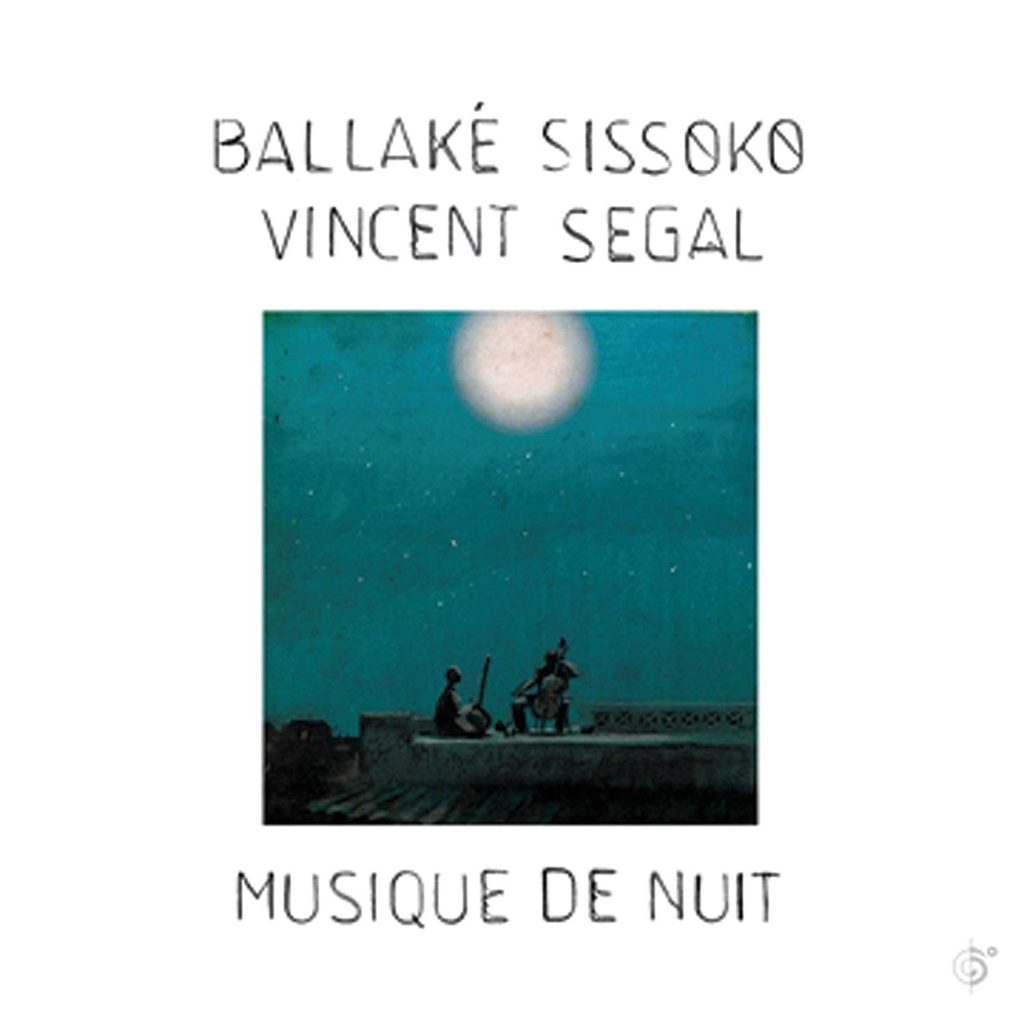 To hear the astonishing expressive character of a kora, take a listen to a favorite audiophile CD that brings together two partners: kora player Ballake Sissoko and cellist Vincent Segal. Their recording is Musique De Nuit [Six Degrees Records] and part of this recording was uniquely made on a rooftop terrace in Bimako, Mali, (with the bleats of goats and rumbling traffic heard below). The recording is superb in its textural detail and its capture of every musical nuance and dynamic flow to this beautiful music. The music is tender, powerful and meditative in its expressive sweep, bringing these two virtuoso players together in supple and heated interplay. 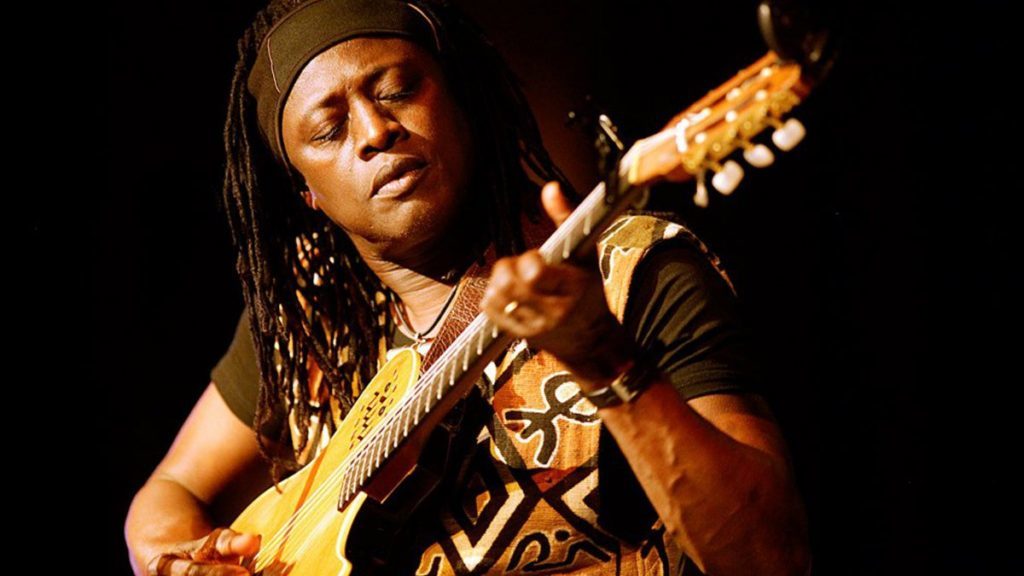 Following the set by Derek Gripper and African Strings, the vivacious Habib Koite took the Somerville Theatre stage and mesmerized his audience with his seamless voice and guitar, working as one vehicle of expressive force and beauty. The sound for this second set was much improved for its clarity, balance and tactile aliveness. 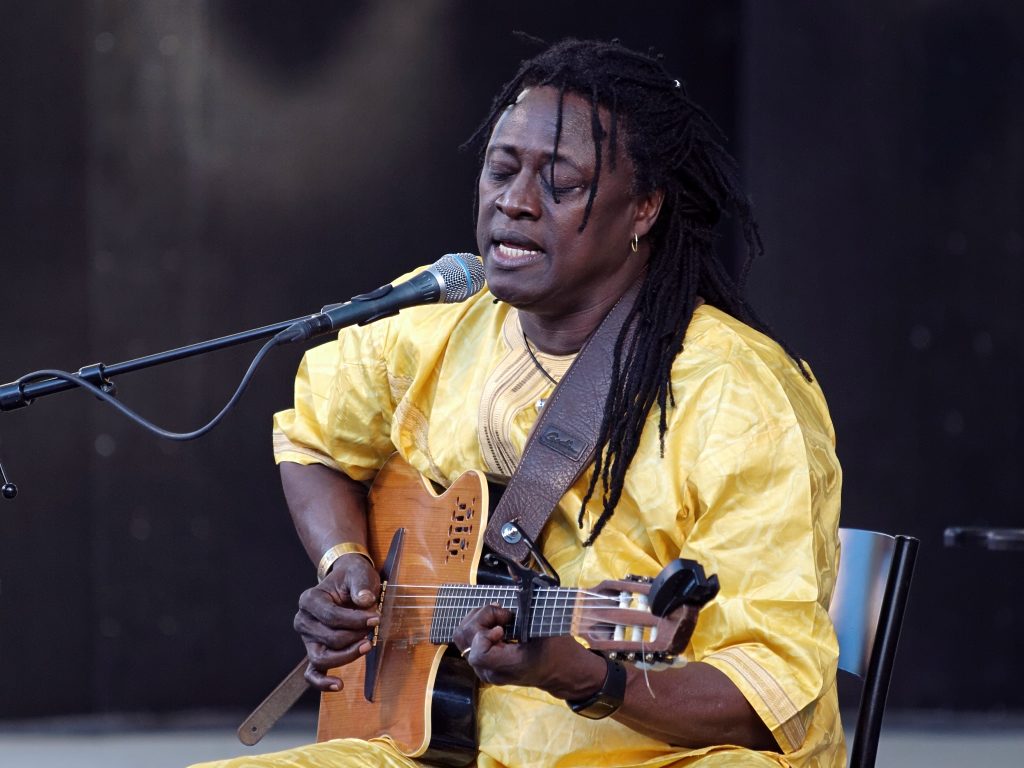 Koite’s dance of open-hearted lyricism, deep grooves (punctuated by Kone’s thrum on his calabash) and ability to fully inhabit the territory of his songs was exuberant. His voice was a perfect vehicle to express his songs: light-hearted and soaring (with a bit of aging grit up top) on songs of love and hope (including a tribute to “women around the globe”) and then turning powerful and low on his slow brewing blues. Koite’s guitar perfectly partnered with his expressive voice. He utilized open strings; short five-note scale runs (with his capo at the top portion of his guitar for its highest dancing effect) and for his blues numbers,, he let his strings go loose and rumbling to create rubbery low notes (sounding like Jimi Hendrix in his swaggering prime). Koite’s final songs were tight statements of groove and joyful dance with Kone hitting his djembe drum and hi-hat with nimble fury. On these last tunes, Koite strolled through the audience strumming his guitar with light string dampening (to deliver an ebullient dancing beat) accompanied his soaring voice. The audience sang along, swaying in the warm of Koite’s sultry beat. 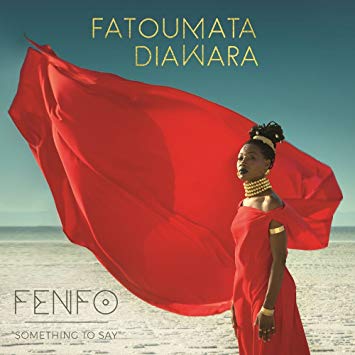 Returning home after this fantastic World Music/CRASHarts concert, I listened to a favorite new CD from another artist from Mali, Fatoumata Diawara, whose music is also a marvel of expressive, dancing power. On her new recording, Fenfo “Something To Say” [Montuno Productions], Diawara and her superb band deliver all the swirl and snap of their captivating music with spawning energy and joy. The recording beautifully captures all of their stunning musicianship and tactile energy, delivering a soundstage that is wide and deep (if your system is up to it!). Diawara’s voice soars and dips, elegant in phrasing and pitch. She and her band are equally at home in the sway of hip-hop, R & B and pop (such as on their grooving “Nterini” or the lilting pop of “Dibi Bo”) or on their lush ballads, such as the moving “Mama” (which features Diawara in duet with cellist Vincent Segal). The splendor of this recording is a dancing gift to the world, from its African roots to the shimmer of its Caribbean beats and beyond. 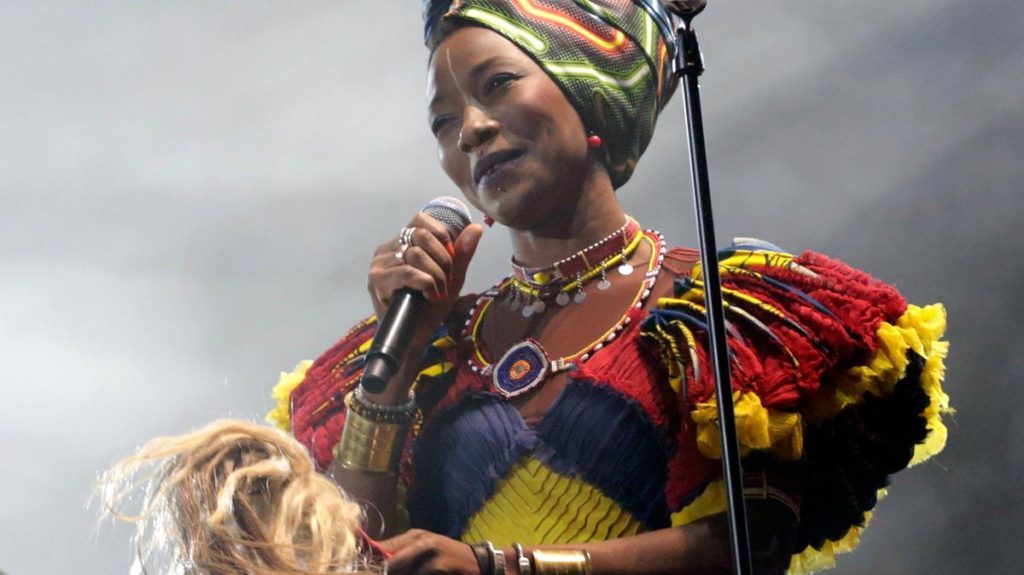