Real music lovers can find the melody in everything. From the park to the concert hall, our friend Nelson Brill is always on the hunt for great sound. In this blog, Nelson brings us to The Berkshires to see what Tanglewood had in store for their audiences this summer. 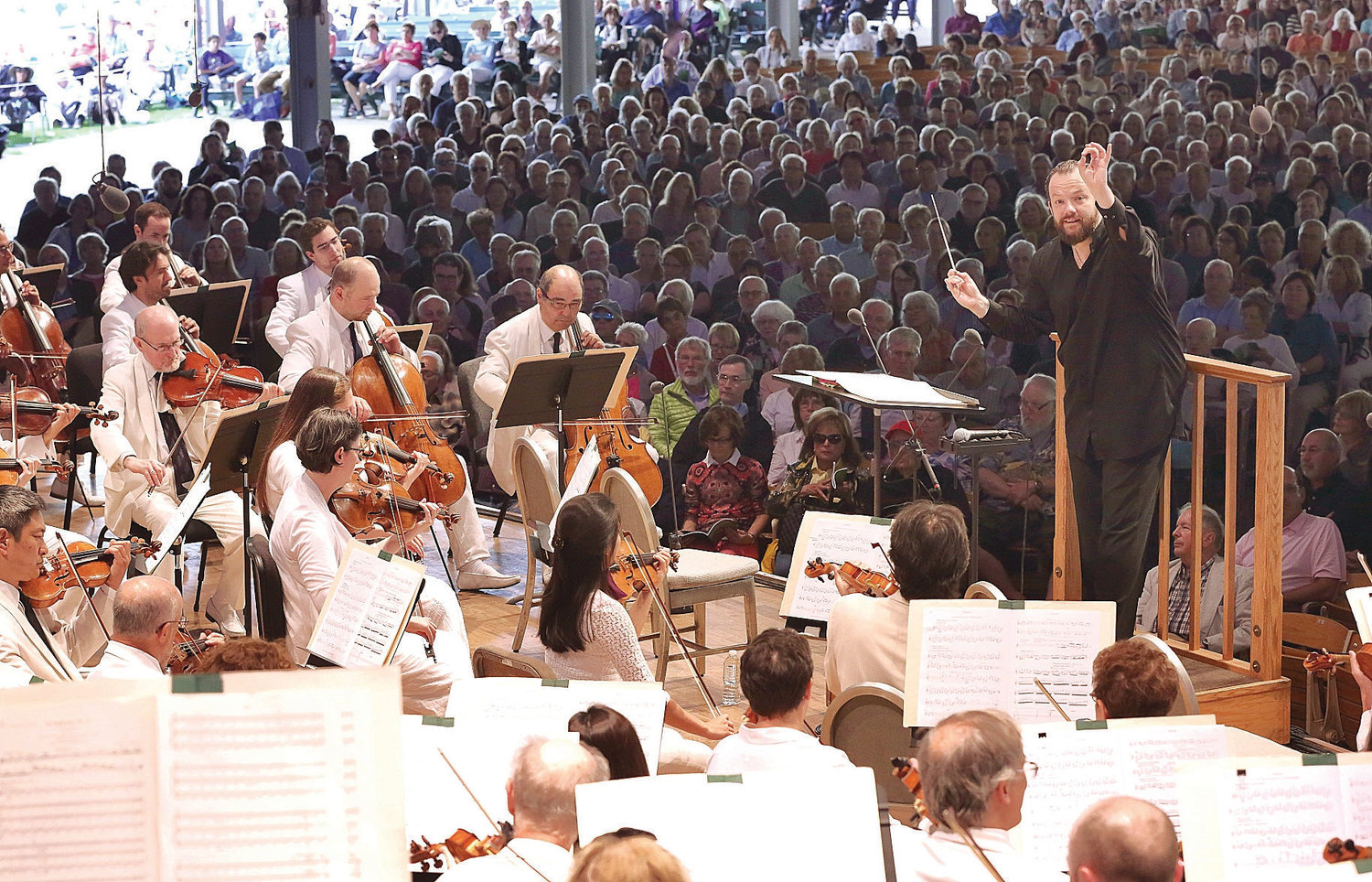 On entering Tanglewood, the idyllic summer home of the Boston Symphony Orchestra (“BSO”; http://www.bso.org), there is always a distinctive welcoming call that you will hear. It is the sound of songbirds that might mix on the summer air with the clarion call from a lone trumpet or a rising note from a soprano’s aria (all coming from Tanglewood’s practice sheds that dot its majestic grounds). 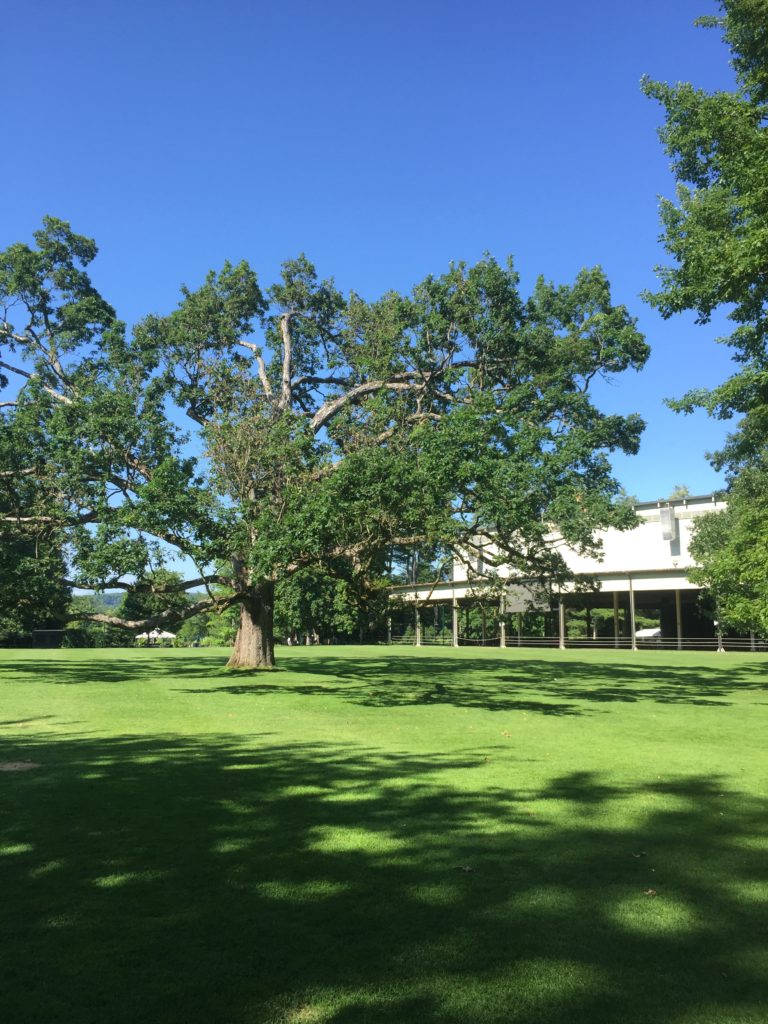 On the early morning of July 13th, I heard this same welcoming call as I entered the Bernstein Gate at Tanglewood to walk to the famed Koussevitsky Shed (the “Shed”) where a morning rehearsal (led by BSO Music Director Andris Nelsons) was taking place. As I sat down at the Shed, I heard several audience members buzzing about the BSO’s performance the previous evening when the young Canadian pianist, Jan Lisiecki, made his Tanglewood debut in performance of Edward Grieg’s Piano Concerto. (“Did you hear that young man at the piano – astounding!”). I happen to also take a seat next to HK Gruber, the composer of Aerial, Concerto For Trumpet and Orchestra, (“Aerial”) one of the pieces that the BSO was rehearsing that morning. Interacting with composers and musicians informally is one of the many special treats at Tanglewood. This summer has brought the opening of Tanglewood’s new education and concert facility, the Linde Center, along with the activities of its Tanglewood Learning Center (http://www.TLI.org) making Tanglewood’s music education programs and community activities even more accessible. 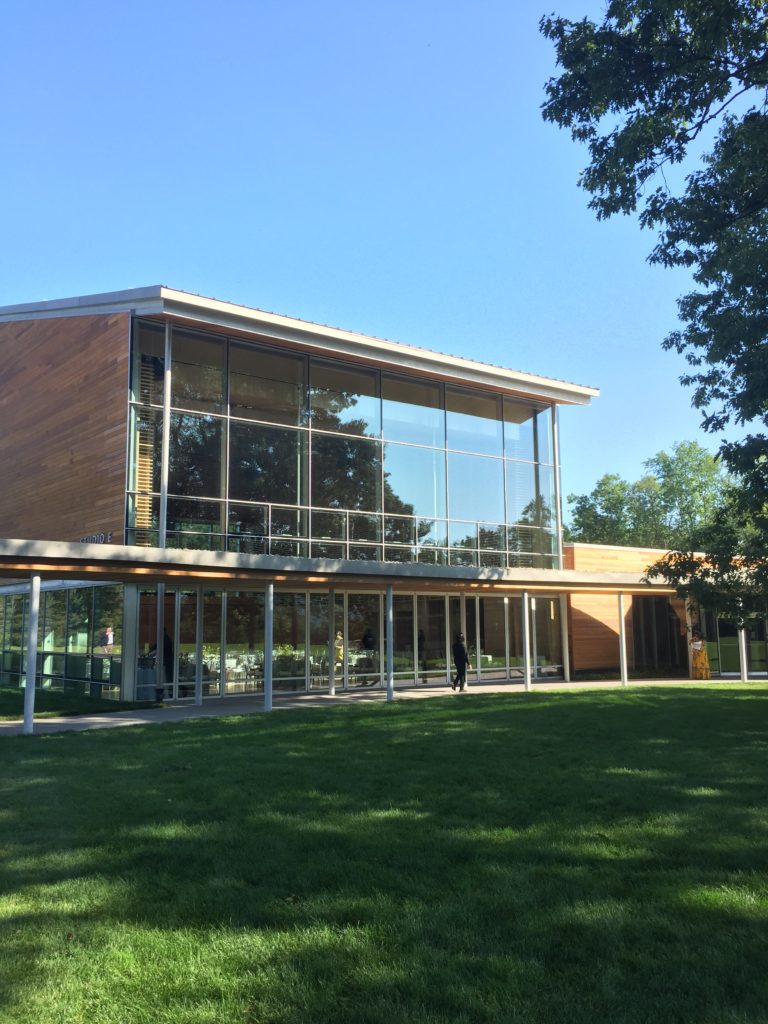 It was a special musical treat to eavesdrop on the BSO’s rehearsal of Aerial, which featured the gifted trumpeter Hakan Hardenberger as its soloist. Aerial turned out to be a fascinating journey in which Gruber has the soloist perform on an assortment of trumpets and mutes to create a swirling pallet of horn colors. Hardenberger moved effortlessly between his tiny piccolo trumpet (sounding brazen and sharp, but when muted, producing soft, piercing bursts); a small polished shofar (producing different breathy sounds as Hardenberger cupped his fingers around its opening) and a silver trumpet ( with a sound that could be crisp or clarion but also vaporous and gauzy when played through a stand-mounted mute). 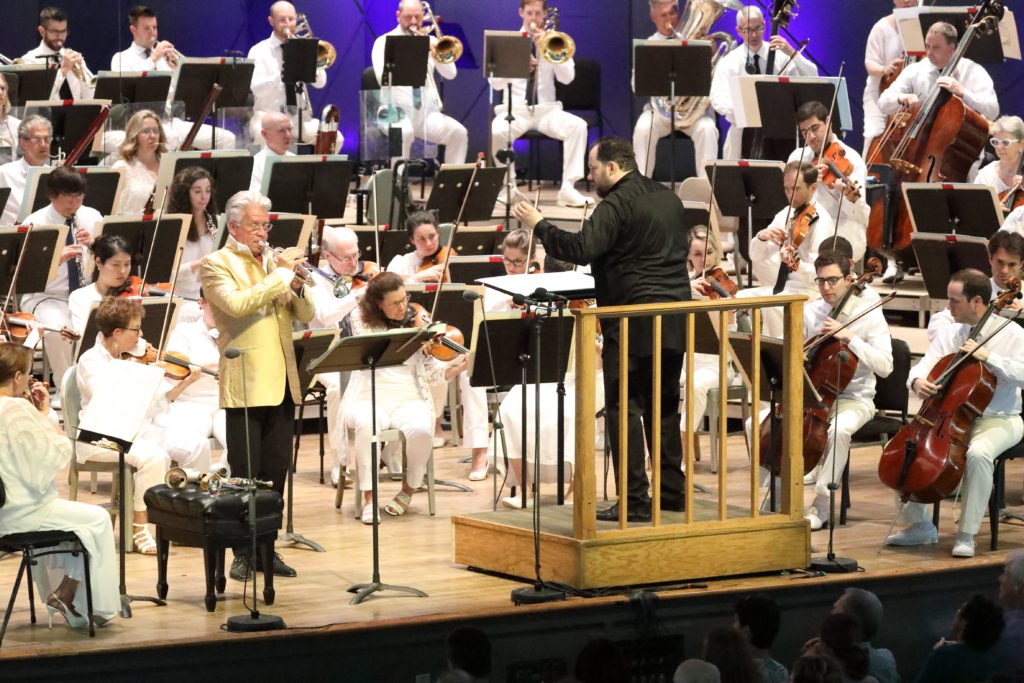 Hardenberger’s metallic frolic was the perfect vehicle to explore Gruber’s colorist inventions in his Aerial. These included Hardenberger’s jazzy bursts and riffs on piccolo trumpet (in duet with a strutting tuba or a racing bass string) or his vaporous trumpet growls (which combined with quiet string holds and the resonant flutter of a marimba run to create a meditative soundscape). Aerial also contained a startling march where Hardenberger’s trumpet joined in an off-kilter jam session with the orchestra, brazen and dancing forth. The conclusion of Aerial was another surprising bolt of color: Hardenberger held a single lingering note on his piccolo trumpet and walked to the side of the stage where a piano sat. He then held this note, blowing softly into the strings of the piano, to create a solitary whisper that slowly evaporated into the stillness of Tanglewood’s morning air.

After this first rehearsal of the piece, Gruber approached the stage to consult with Nelsons and Hardenberger and then several passages were rehearsed again. In one section, Nelsons instructed the brass section to play softer so that a saxophone run could be heard more distinctly. In another section, he and Hardenberger requested that the woodwinds create a more dynamic wave action to a colorful run, working on accenting certain beats so that they created an undulating wave of sound (demonstrated by Nelsons as he gestured his baton up and down, waving his arms in a wavelike motion). 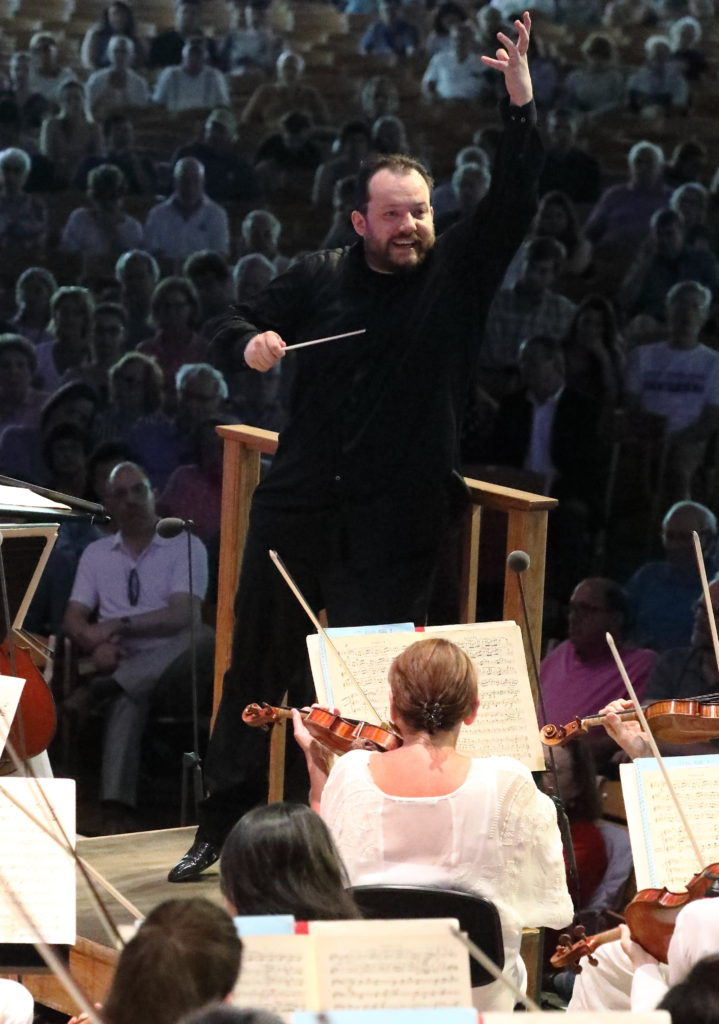 In addition to the unique opportunity to catch an early morning BSO rehearsal at Tanglewood, there is also the opportunity to catch a great student performance of a work you may not have heard. On this afternoon, there was a concert given by students of the Boston University Tanglewood Institute (“BUTI”; http://www.bu.edu/tanglewood), led by their conductor, Bruce Riesling, in performance of Desert Transport, an exciting work by composer (and BUTI alumnus) Mason Bates. 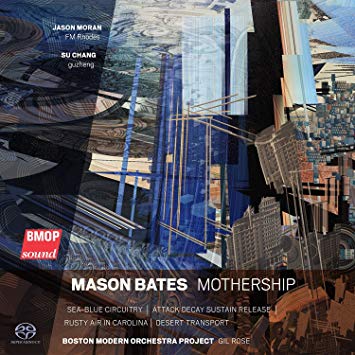 I had been looking for a chance to hear a live performance of Desert Transport ever since I heard the fantastic recording of it by the Boston Modern Orchestra Project (“BMOP”), led by their intrepid conductor, Gil Rose, on their superb CD/SACD Mothership [BMOP Sound; http://www.bmop.org]. This earlier performance, (recorded in the airy confines of New England Conservatory’s Jordan Hall), is full of sonic treats and stellar musicianship. The music on this recording is bracing and lustrous, riding on prodigious brass flourishes, creative electronic effects, layered string sections (providing a juicy thrum) and a soundstage that is deep and wide.

The BUTI Young Artists performance of Desert Transport at Ozawa Hall was likewise potent and full of collective verve. Bates’ journey moved from sprawling canyon lands (represented with airy string holds and sweeping waves of woodwind colors) to meditative Native American chants (whose recordings are layered over the soft swells of strings) to a helicopter ride over the desert landscape where the sound of its rotating blades are heard in the strings’ quick pounces on their bows and in a crackling of percussion. The BUTI Young Artists dug deep to deliver all of these colorful details of Bates’ music, working as a coherent unit- even on Bates’ most demanding surges. The finale, with its huge bass drum whips and swirling string and brass choruses, sounded like a vast, cataclysmic roar in the crisp acoustic of Ozawa Hall. 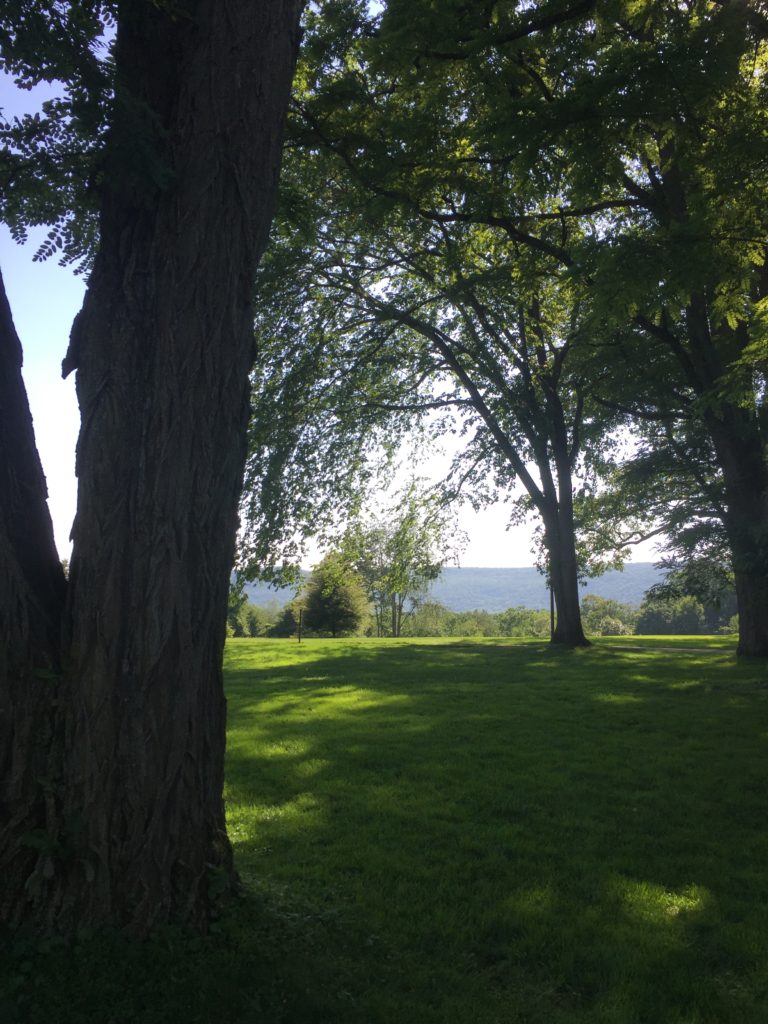 As twilight descended on Tanglewood, the Prelude Concert, (usually presented by Fellows of the Tanglewood Music Center before the evening concert) was a more intimate gathering focused on chamber music. This evening, there was a shimmering performance of Clara Schumann’s Piano Trio in G minor (1846), by pianist Mathilde Handelsman, violinist Wei Lu and cellist Jonah Krolik.. Schumann’s piece is filled with dreamy light melodies, delivered with sweet and lilting touches in the hands of these three alert partners. Handelsman was particularly fine at her piano, lacing her notes with soft pedal touches that allowed each note to flow graciously into her partner’s embraces. The vivid acoustics of Ozawa Hall allowed for every cello plunge, violin soar and piano glow to be heard crisp and clear into the lingering shadows of the lawn.

This graceful performance of Clara Schumann reminded me of a new favorite recording involving another piano Trio, The Hermitage Piano Trio, (“Hermitage”) performing chamber works by Sergei Rachmaninoff. This recording was made in the airy confines of another treasured Hall of our region, Mechanics Hall, (located in Worcester, MA.) and produced by the esteemed audiophile team at Reference Recordings (“RR”)(http://www.referencerecordings.com). 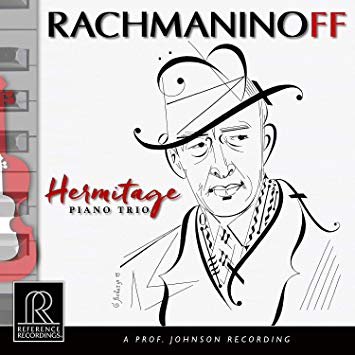 In contrast to Clara Schumann’s lilting melodies, here we have the deep, soulful meditations of Rachmaninoff played with elemental and unflinching power by the Hermitage. For instance, the final movement to Rachmaninoff’s Trio Elegiaque no. 2 is a searing example of how violinist Misha Keylin, cellist Sergey Antonov and pianist Ilya Kazantsev combine into one intense vehicle to reveal all the drama, virtuosity and controlled combustion of this finale. Kazantsev’s piano is thunderous, his poignant held chords reveling in their sustained attack and airy decay. His touch on piano is both cataclysmic and enveloping. Antonov’s cello and Keylin’s violin surge in and around Kazantsev’s thunderclaps, all beautifully captured on this recording in their earthy tones; their spare runs and their entwining, soulful holds.

The RR team is unrivaled when it comes to capturing the ambience of a given recording space; the natural image dimensionality of players on a stage and the tactile aliveness of an acoustic performance. This new Hermitage recording joins another earlier RR gem, (another of my favorites) also recorded at Mechanics Hall. 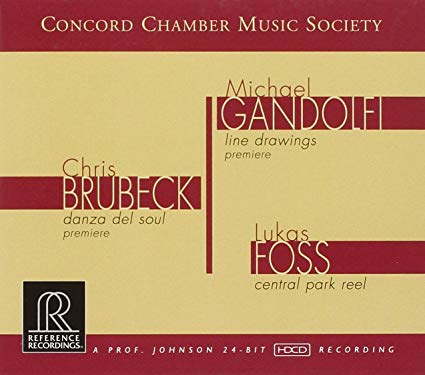 This is a recording of the Concord Chamber Music Society (“Concord”; comprised of members of the BSO) in performance of music from contemporary composers Chris Brubeck, Michael Gandolfi and Lukas Foss. Here is a journey filled with sparkling acoustic instruments delivering all the spunk, creativity and motion of this music that defies characterization, moving as it does from classical, jazz, bluegrass and beyond. The recording is superb in its presence and its tactile life. For instance, there is nothing more delectable than hearing the rotund, woody sound of Thomas Martin’s sinuous clarinet play in duet with Wendy Putnam’s off-stage lithe violin, and listen as Putnam moves gradually onstage to join her partners in Brubeck’s shimmering Danza Del Soul. This is the stuff of music-lovers’ dreams and audiophile pleasures.

Back at Tanglewood, the gala evening concert on July 13th involved a performance of Giuseppe Verdi’s dynamic and sumptuous Requiem, under the direction of Andris Nelsons, with the full Tanglewood Festival Chorus and four stellar opera singers adding their vocal glories to Verdi’s soaring drama. 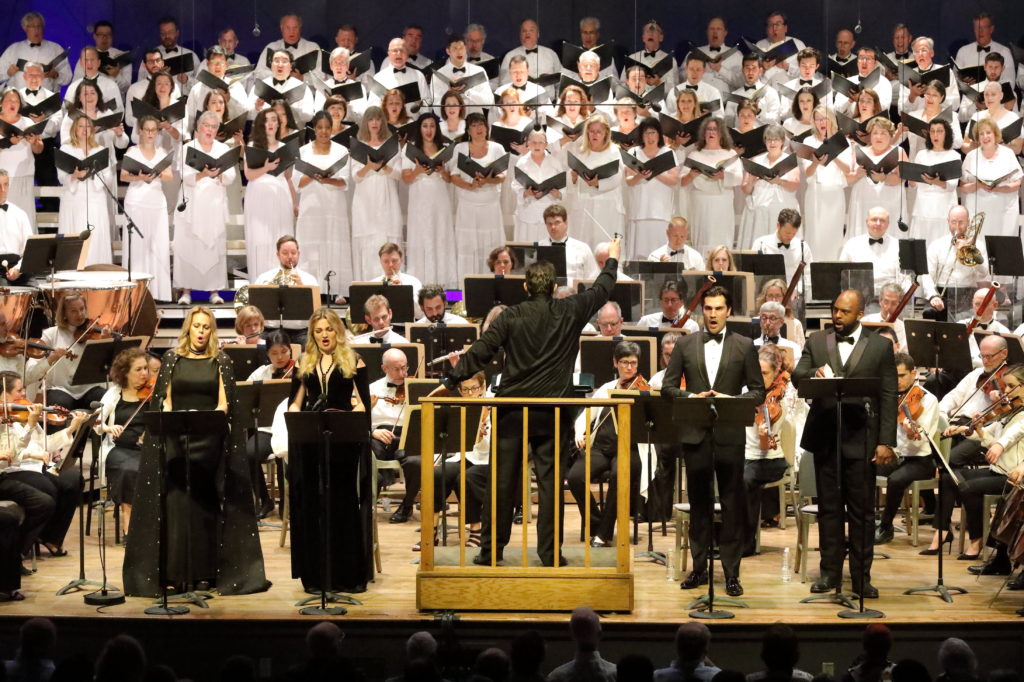 This concert brought out the best in Tanglewood’s communal and musical spirit. A capacity and diverse crowd of young and old gathered on Tanglewood’s grand lawn before the Shed, dining on picnic blankets and strolling the grounds. As the performance began, the large crowd hushed to a whisper (the only noise being the singing of crickets) as a full moon rose over the Berkshires. 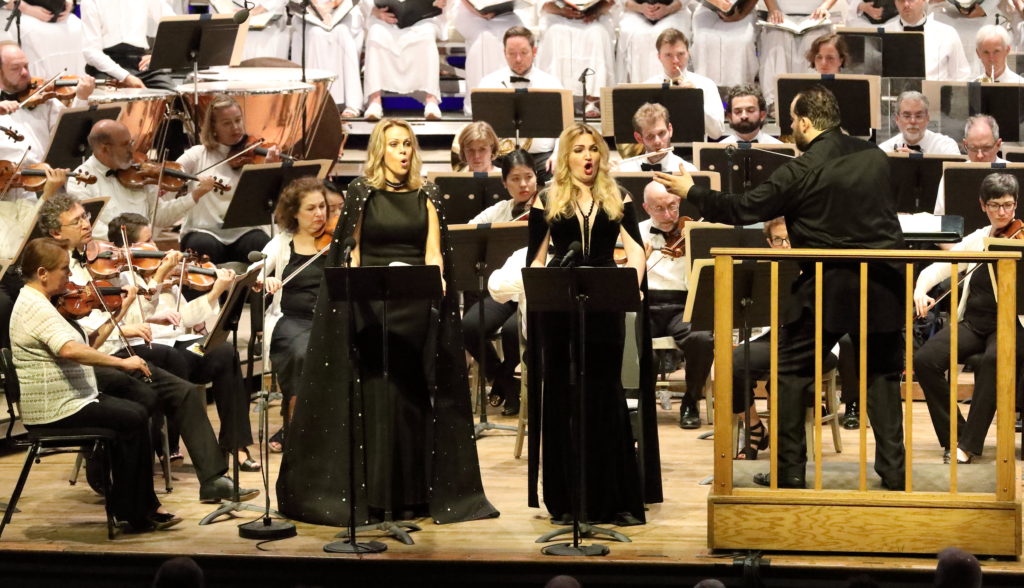 There were many highlights to this starry performance. The duets performed by soprano Kristine Opolais and mezzo-soprano Oksana Volkova were spectacular vocal creations; their sweet and powerful voices entwining beautifully. Opolais’ dulcet soprano was tender, fluid and when called upon, intensely passionate in her highest soars. Volkova possessed a full bodied and glowing voice, perfectly suited to bring passion and warm phrasing to Verdi’s dramatic score. Tenor Jonathan Tetelman was a sparkling vocal presence with his own vocal passion and fluid athleticism. At one point, he held a fiery high note with bravado and then effortlessly descended with a song filled with rapid pitch changes, (all unwavering in their expressive intensity). Bass Baritone Ryan Speedo Green was also indefatigable. His blasts of deepest swagger echoed into the night. He also possessed a beautiful way with soft lyrics and harmonies, caressing his deep phrases with tenderness, cushioned in quiet orchestral and choral passages. The Tanglewood Festival Chorus rang out with their own sumptuous vocal energy, spreading their radiant voices over the lawn (into the Berkshire Hills beyond) on their most regal crescendos. When Nelsons held his hands high to signal one of Verdi’s dramatic moments, the earth around Tanglewood felt like it was shifting under the thunder of human voices and instruments in full regalia, proclaiming their leaping unity in musical purpose. 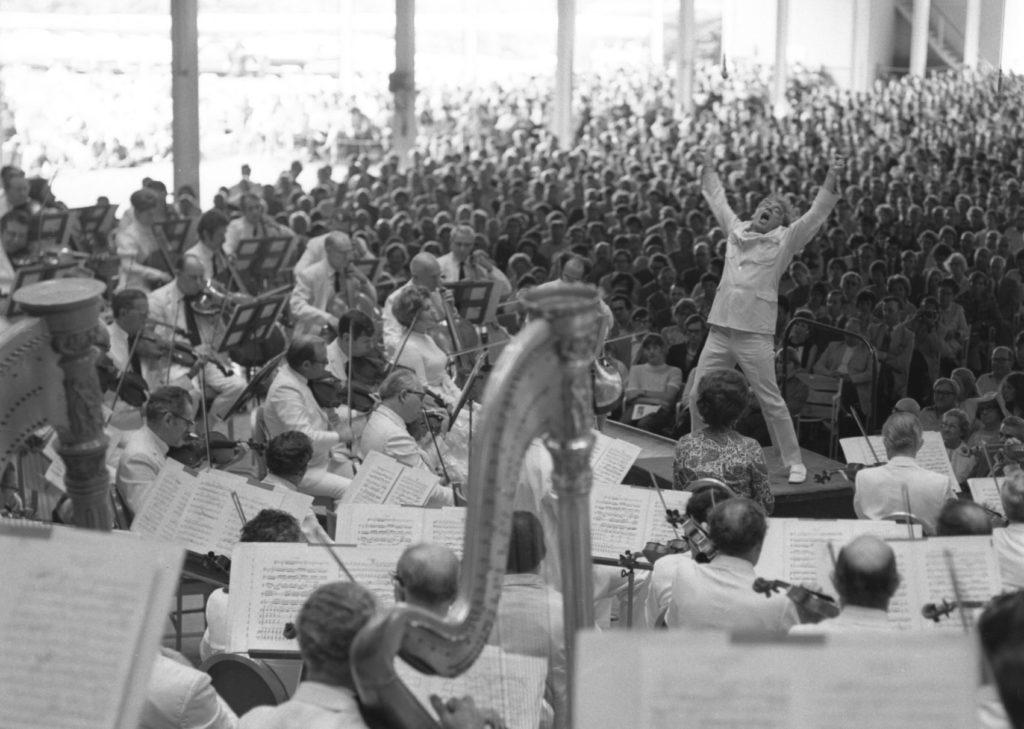 You can read more of Nelson’s concert reviews at www.bostonconcertreviews.com.