In this blog, Brill heads to The Somerville Theatre to see The Wood Brothers perform their “carousing vaudeville and fiery rock n’ roll” set.

The Somerville Theatre (located in the heart of Davis Square in Somerville, MA.) opened its doors on May 11, 1914 and the first acts that graced its stage that night were a vaudeville act; a “singing skit” and a “comedy playlet”. (www.somervilletheatre.com). One hundred years later, the Somerville Theatre is still going strong.

On February 8 and 9th, The Wood Brothers (www.thewoodbros.com) came into town to deliver their own version of carousing vaudeville and fiery rock n’ roll on the Somerville Theatre’s historic stage to the delight of their rollicking, dancing audiences.

The Wood Brothers (“the Brothers”) love to harken back to the days of original vaudeville and folk acts. Midway through their performance on February 8th, the Brothers (Chris Wood on bass, vocals and harmonica; Oliver Wood on vocals and guitar and Jano Rix on keyboards, vocals and everything percussive) dimmed the Somerville Theatre house lights, turned off all stage microphones and gathered in a semi-circle around a single antique microphone (which they call their “Big Mic”). Basking in this autumnal glow, the Brothers performed the filigree title track from their 2013 recording, The Muse [Southern Ground Artists] and their classic, “Postcards From Hell,” (a tribute this evening to the late Levon Helm) in stately sweet harmonies.

The unkempt beauty of these stark ballads highlighted the down-home feel of this great band and their consummate musicianship. Each number combined far-ranging influences such as a brush with Calypso beats (in Chris Wood’s pumping bass solo) to Oliver Wood’s country vocal touches.

Other sweetly grooving numbers at this concert included the opening “Two Places” and “Touch of Your Hand” (both taken from the Brother’s excellent 2015 recording, Paradise [Honey Jar Records]), with Oliver’s lithe and clear vocals shimmying alongside Chris’s pungent bass and Rix’s keyboard off-kilter splashes.

Betwixt and between these grooving ballads and blues, The Brothers took off on a raucous ride through their arsenal of full tilt rock n’ roll sending their lyrics (both comic and cutting) soaring on ripped-up guitar chords and huge bass pelts. Leave it to The Brothers to come up with lyrics such as: “You put your lips in the wind and hope for some kisses back” or “He hails from the great state of confusion and he now pulls a push broom at the inconvenience store.” The latter lyric is taken from their soaring “Singing To Strangers” that crushed with gleeful guitar heat and was partnered with “Snake Eyes” (both numbers found in spirited versions on Paradise) that had Chris Wood dancing in playful revel: he pounded his exuberant bass strings into a frenzy and then, (holding onto the very tip of his huge acoustic bass) he shimmied across the stage to finally fall on his knees to the blasts of Rix’s gut-thumping drums.

The frolic continued with blazing harp and bass propelling the boogie of “Honey Jar” as Oliver Wood sang in his wonderfully dry, expressive and thin-as-a-reed vocals. This careening number was partnered with the exuberant “One More Day,” a song that was first recorded on The Brothers 2006 recording, Ways Not To Lose [Blue Note]. (For audiophiles, I recommend Ways Not To Lose as The Brothers’ most natural sounding recording to date, because it records them in an intimate session with natural tones and textures to their beguiling instrumental and vocal interplay, with the spirited drummer Kenny Wollesen in the creative mix).

“One More Day” took on a furious pace and blistering heat at this concert as Oliver took up his electric slide guitar with fervent swipes of crushing and blurred high notes followed by Rix’s drum solo that was fit for a boisterous New Orleans “Second Line” parade. Appropriately, this heated jam ended with a spontaneous outburst of a warped version of “The Saints Go Marching In.”

In the final moments of this raw funk fest, The Brothers came full circle to revisit the glory of The Band, (the Brothers’ upcoming release will be a performance recorded at Levon Helm’s Barn) and lifted the 100 year-old roof of the Somerville Theatre with a soaring version of The Band’s “Ophelia”. At the apex of this reveling version, Rix took a turn in Levon’s honorary seat by singing the chorus at his drum kit while his two partners caroused around him with effusive harmonies and their entwining brotherly love. 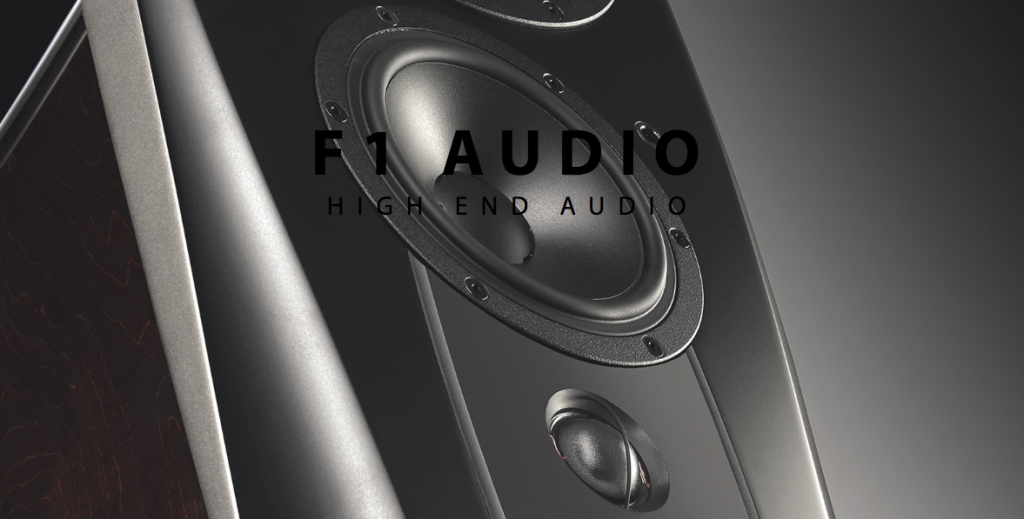 If you’re in the Chicago area, be sure to stop by F1 Audio, this Thursday, February 23rd, starting at 4:30PM, for what is sure to be an amazing evening!

Factory representatives will be on hand performing demonstrations and answering questions. Register for a chance to win music from MoFi records. Special pricing during the event. Refreshments will be served.

Call or email to register:

We are very excited to share a remarkable review of our flagship product, Odin 2, published in The Absolute Sound. In his article, Jacob Heilbrunn was unmistakably wowed by the improvements our Supreme Reference cables brought to his system, including a lower noise floor, “startling amounts of inner detail and nuance”, and the ability to take “transient speed to a new level”. In fact, Jacob couldn’t help but complement Nordost on its job designing and manufacturing Odin 2 cables:

“Nordost deserves the highest possible commendation for building on its previous efforts to produce a statement product that is remarkable for its purity and resolution, transparency and clarity.” 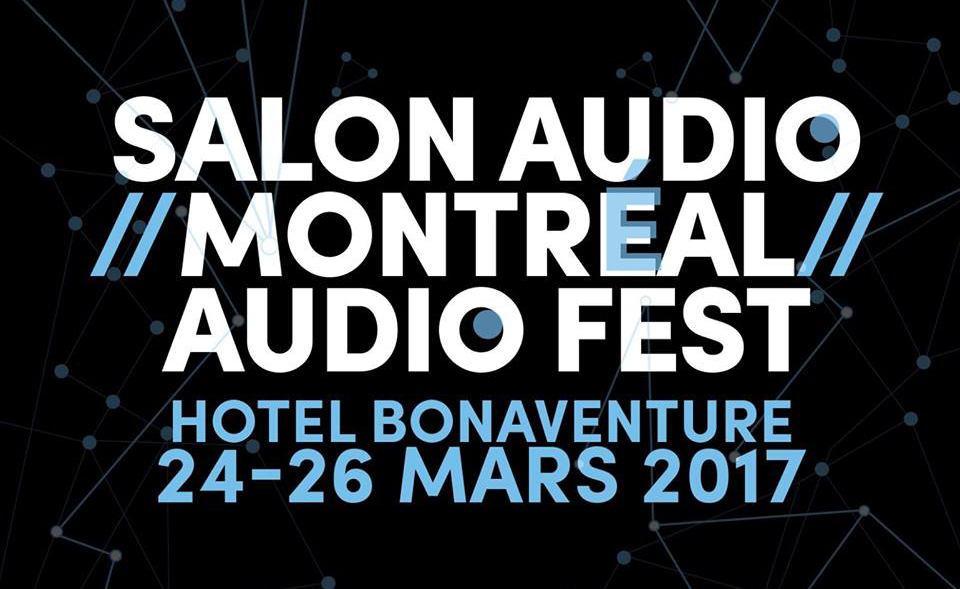 Nordost is excited to attend the Salon Audio, Montréal Audio Fest, March 24-26. Please join us at l’Hôtel Bonaventure Montréal in Salon St-Michel, where Nordost sales representatives, Michael Taylor and Bruno de Lorimier, will be performing live demonstrations and product comparisons throughout the weekend. The Montréal Audio Fest is the perfect opportunity to hear the effect that quality cables can have on a hifi system, and to determine how the caliber of performance is improved as enhancements are made to cable design. Admission is free to the public, so we hope to see you there!

Our product specialists receive questions on a daily basis about Nordost products, their application, and hifi in general.  We thought that we would take a minute to share some of our most recent and frequently asked questions here so that everyone can get the answers they are looking for!

Q: I have never owned any type of audio power equipment. Where do you think I should start?

A: A lot of our advice would depend on your particular system. Generally however, step one would be investing in a high quality distribution block. Our QBASE units address the conflicting flows of signal and ground paths in a typical system, which create noise on the line. By using a unique method that we call “star-earth topology”, our QB8 and QB4 units (QB6 if you are from the UK) control ground flow by lifting the impedance level of every outlet except for one (the “primary earth” outlet) by .5 Ohms. This creates an uninterrupted, straight-line AC distribution path from the wall to each individual component. This has a significantly positive impact on your soundstage—it lowers the noise floor without any high frequency compression. 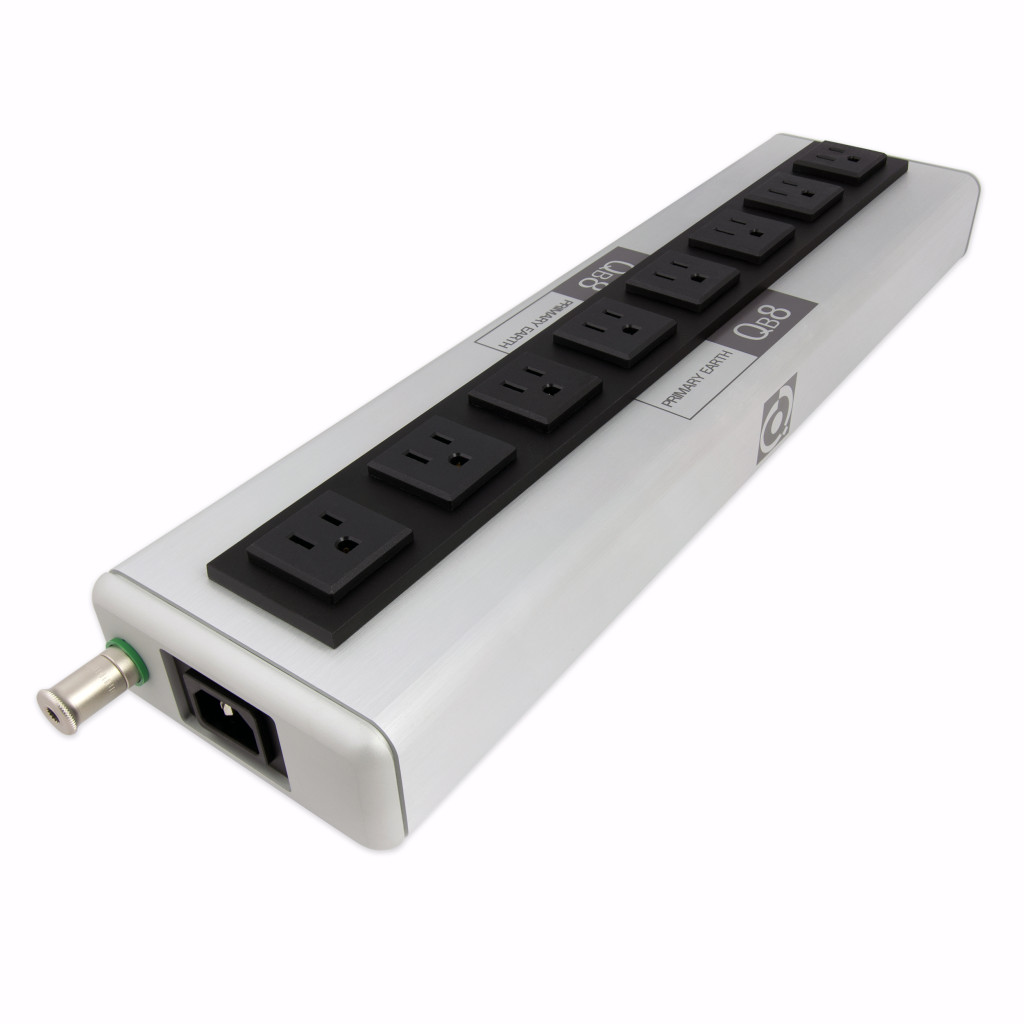 Q: My dealer supplied me with a copy of the Nordost set up and tuning disc. Could you let me know how long and how often I should use the “burn in” track?

A: We’re glad that your dealer gave you the Nordost System Set-Up and Tuning Disc. It really does accelerate the burn in process!  Using the burn in track on repeat, your interconnects and speaker cables will require about 96 hours of continuous play to get to the point where we consider them “burned in” (power cords burn in much faster and don’t require this).  After that, if you use the disc once a year for several hours, the cables will continue to perform perfectly.  We recommend that you repeat this process yearly in order to ensure that your cables are subjected to frequencies that your music might not contain. 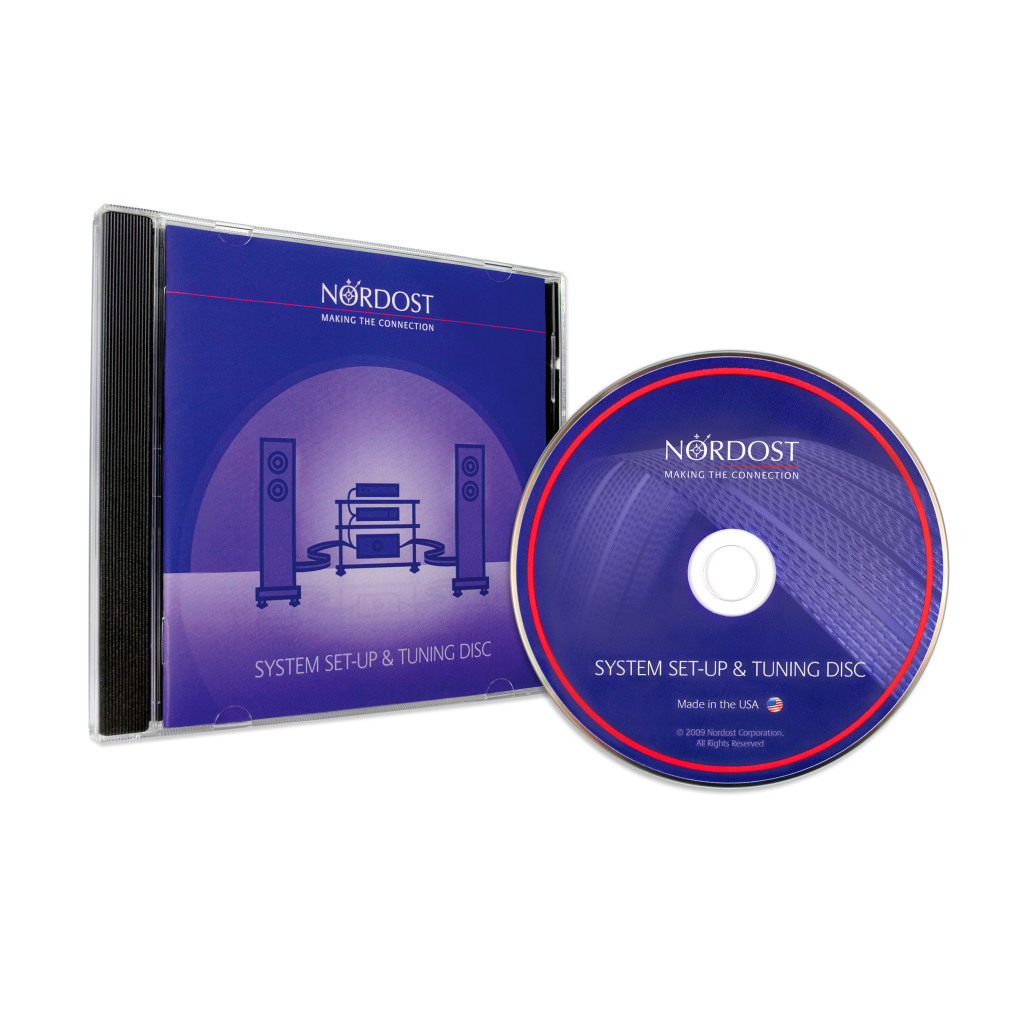 Q: I am already using most of Nordost’s power products. I am now thinking about adding QK1 and/or QV2, but I don’t know which I should use in my one remaining free outlet. What problem(s) are the two different units designed to solve?

A: I think it is important to clarify that these two units are not solving problems per se, but more importantly, they are adding harmonics in different frequency ranges. The QV2 adds harmonics to the midrange and upper bass frequencies, and the QK1 adds harmonics to high frequencies—so you use them to add clarity to those areas.

The QV2 provides more audible effects, since it’s easier to hear changes within the mid and lower frequency spectrums. However, both the QV2 and QK1 make nice improvements.

We also want to point out that these units are not limited to the space available on your distribution block. QV2 and QK1 units can also be plugged into wall sockets, as long as they are in the same circuit as your sound system. When you are purchasing these devices, it is important to note that QV2 units work best in pairs, since that has a tendency to double their impact — QK1s work great in any quantity. 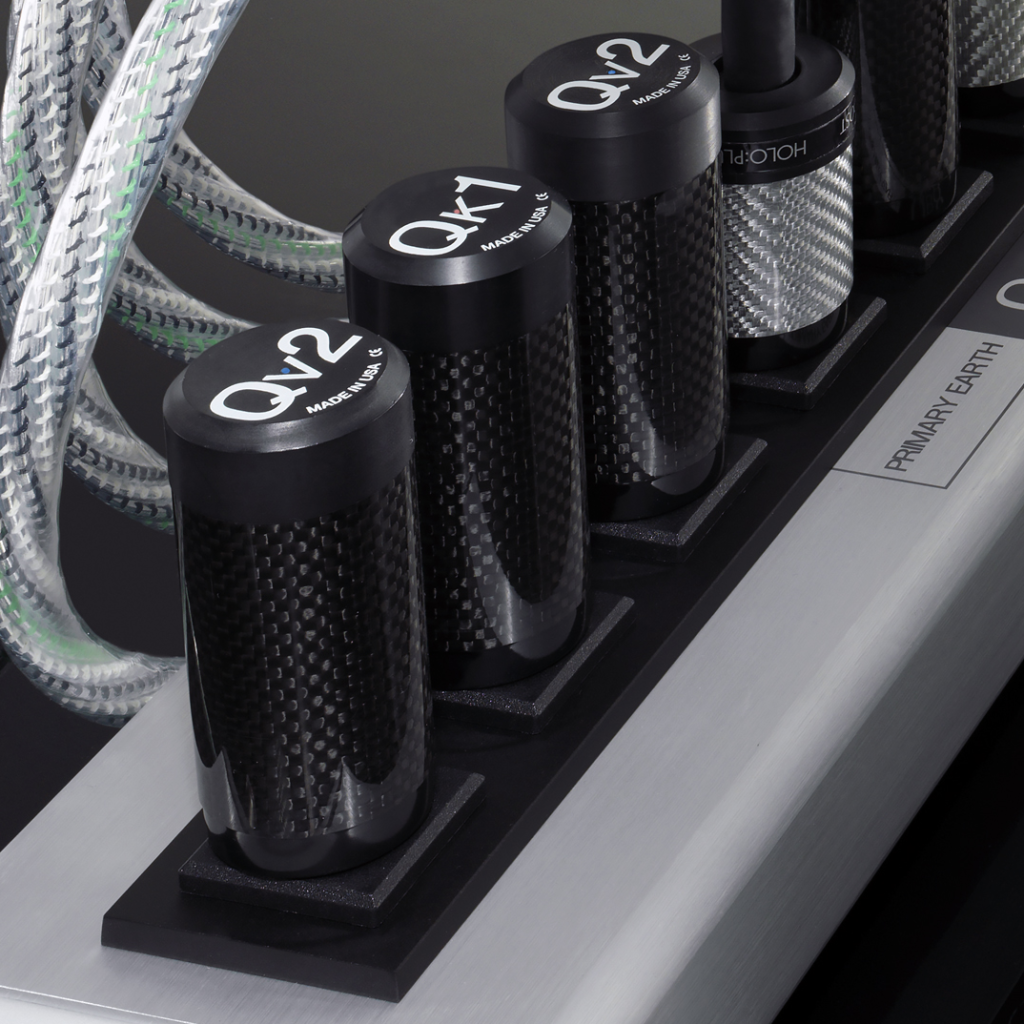 Here are some of the songs that we will have on rotation this February.