At Nordost we are proud of the fact that as you go up our product line, the improvements and effects that our cables bring to your sound system are easily demonstrable. At trade shows and industry events, Nordost representatives and product specialists do linear cable swaps to highlight these transitions. However, most people don’t have the opportunity to attend these events, so they rely on reviews to make an informed decision. While reviews are a great resource to better understand how a cable can transform a system, you rarely come across reviews that describe the changes that result from choosing an entry-level, to a mid-level, to a reference cable within the same brand. That is why we were so excited when Jeff Dorgay, from ToneAudio, came to us with his idea to compare four of our tonearm cables (from our Blue Heaven, Heimdall 2, Frey 2, and Valhalla 2 ranges) for his publication. The result was a very honest look at Nordost cables that we think end users will really appreciate.

“As much as we wanted to squeal to high heaven that a nearly $5,000 tonearm cable was bullshit, it isn’t. If you have the system to show it off, you will not be disappointed in the least.”

“Like all the other Nordost cables we’ve had the pleasure to audition, they offer a linear increase in performance as you go up the range”

“We’ve walked away from hundreds of hours of listening to not only be impressed, but to suggest them heartily.”

To read this article in its entirety, go to the review section on the Nordost website or click the following link:

A Clear Advantage—Going up the range with Nordost

Or, Why Our Kids Will Love High End Audio As Much As We Do!

After 40 years in audio, I’ve got a pretty awesome stereo system. Of course, it didn’t start out that way…

In 1975, when I bought my first rig, I spent every dime I had on a Kenwood Integrated amp, a Philips Turntable and a pair of KLH speakers. It was a popular “Entry-Level” system and cost a fortune! Back then, we didn’t know electrolytic capacitors, tone controls and most of the other technological particulars of this system were sonically degrading, or that it would quickly become obsolescent –its resale value sinking like a stone.

Back then, all of my friends wanted a slammin’ stereo. Aside from a car, it was the “Dream Purchase” for virtually every High School student in America. Nowadays, with computers and a host of tech toys competing for young consumers’ attention (and cash) stereos haven’t been the “Objects of Desire” that they used to be. That’s all about to change. Today’s entry-level gear is SO good that it is attracting young music lovers in numbers not seen in decades!

Millennials and Hipsters are discovering the pleasures of High End Audio, drawn largely by the resurgence of vinyl records. On a recent trip to my local Barnes and Noble, I was amazed and gratified to see that almost 20% of the store’s floor space was occupied by record bins, with dozens of hip young gunslingers flipping through stacks of freshly pressed LPs. Just last week, legendary recording engineer, Bob Ludwig, told me that every album he masters is now released on vinyl as well as digital. The “Analog Boom” has caused turntable sales to skyrocket, and the quality of entry-level turntables has kept pace. Pro-Ject has just built the largest turntable factory in Europe, capable of cranking out over a quarter million ‘tables a year! Rega has recently introduced new models at both lower and higher prices than ever before, hoping to lure first-time buyers with bargain ‘tables and then encourage them to upgrade to flagship products.

Sales of tube electronics—especially at lower price-points—are also flourishing. PrimaLuna, whose all-tube integrated amplifiers start at $1,799, has experienced sales growth of over 25% per year for the last several years. Rogue Audio, another bargain-priced tube brand headquartered in Pennsylvania, has experienced similarly spectacular increases. On the speaker side, KEF’s LS50 redefined what’s possible for under $1,500, while Elac now offers more than a half dozen high performance models which retail for under a grand. And of course, Nordost’s Leif Series has put ultra-high-performance cabling systems within the reach of every music lover.

Thanks to the “Hip Factor” of vinyl records and vacuum tubes, a new generation of consumers (with high disposable income!) is discovering the pleasures of Audiophilia. Better still, entry level equipment has gotten so good—and for so little money—that it’s now possible to assemble a world-class HiFi system at prices that would have been impossible just a few years ago. A NAD 316BEE Integrated Amplifier ($379), Project Debut Carbon Turntable ($399) and Elac Debut B4 speakers ($179/pr) deliver super sound for less than one thousand dollars, giving budget-constrained consumers a heaping helping of high-end panache and long-term investment potential for about the same price as a weekend at the Jersey Shore.

My point here isn’t to design systems for the readers, nor is it to pitch products that I admire. I’m simply trying to illustrate that High End Audio, whose long-term viability was once in question, is alive and well and growing at a healthy and satisfying pace! More importantly, it isn’t just veteran audiophiles upgrading existing systems; rather, it is Millenials, Hipsters and other first-time buyers looking to make a lasting investment in quality HiFi gear. Of course, these new customers will upgrade over time, as we all do, which should guarantee a long and prosperous future for the hobby we love. For all of you who are worried about the future of HiFi, rest easy. High End Audio is getting better and better! 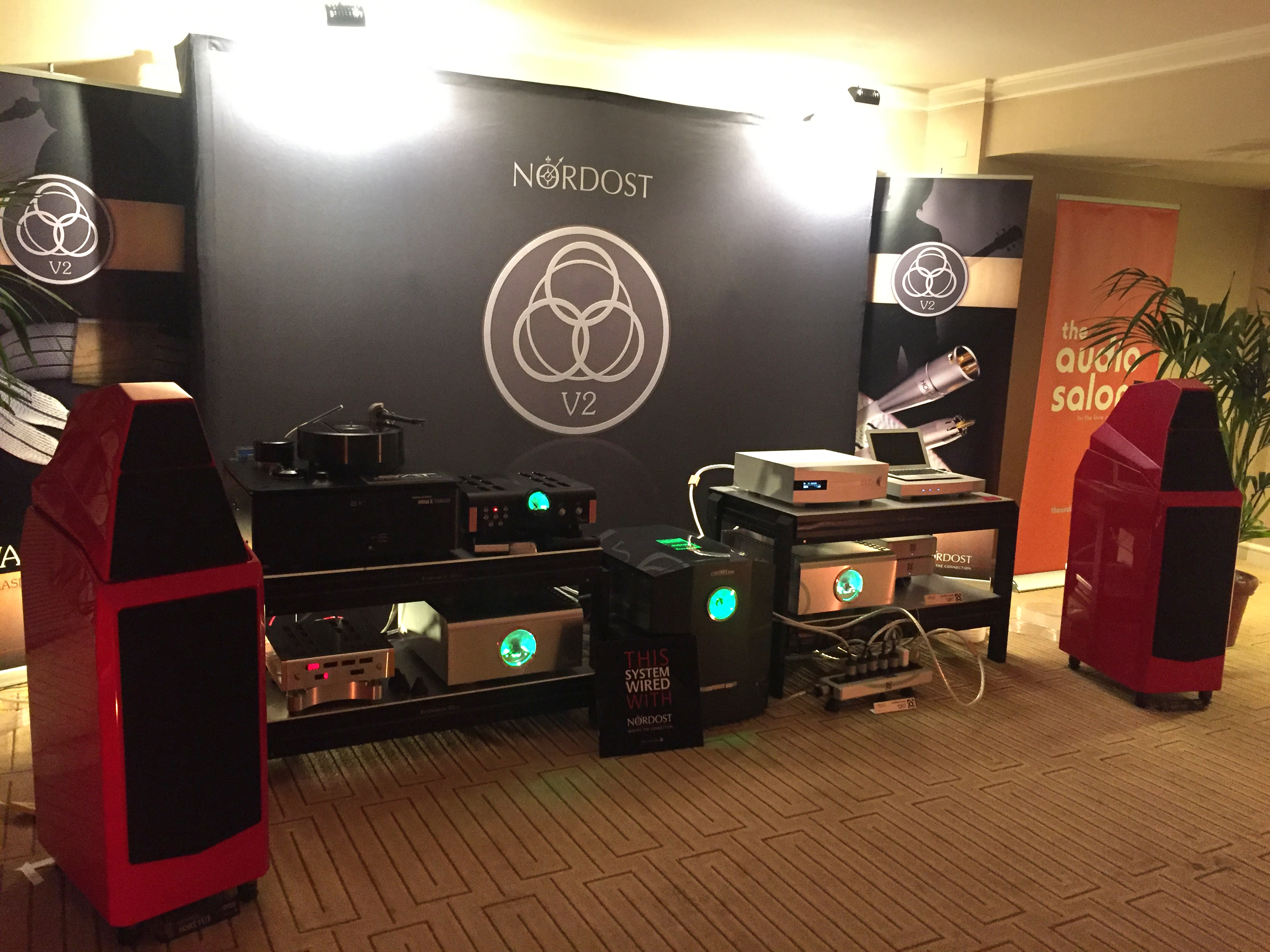 This year at T.H.E. Show Newport, Nordost enjoyed tremendous success, both in our own room and in several other systems throughout the event.  Thank you to Maier Shadi for putting together such a first rate system to highlight our Reference Valhalla 2 cables.  The rest of our system was made up of Wilson Audio Sasha 2 loudspeakers, two Dan D’Agostino Master Systems Progression mono amplifiers, Dan D’Agostino Momentum preamp and phono stage; dCS Rossini CD transport/DAC and dCS Rossini Clock; Brinkmann Balance turntable with SAT pickup arm, Lyra Atlas cartridge, and Minus K Vibration isolation base for the Brinkmann, and Stromtank Independent Power System.

For more information about the other fantastic systems featuring Nordost cables, see the following show reports:

If you weren’t able to make it to the show, please enjoy some photos below!

Nordost’s Michael Taylor and Maier Shadi of the Audio Salon were in the house to give some great demonstrations! 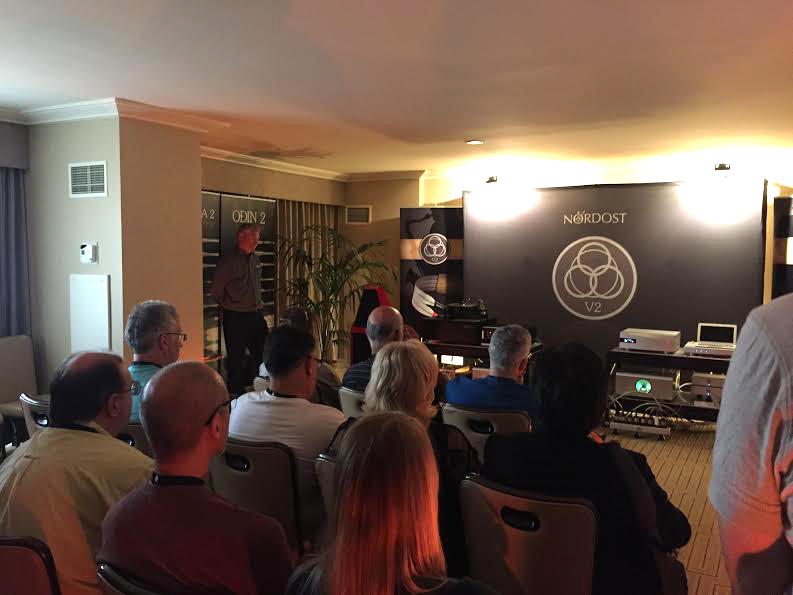 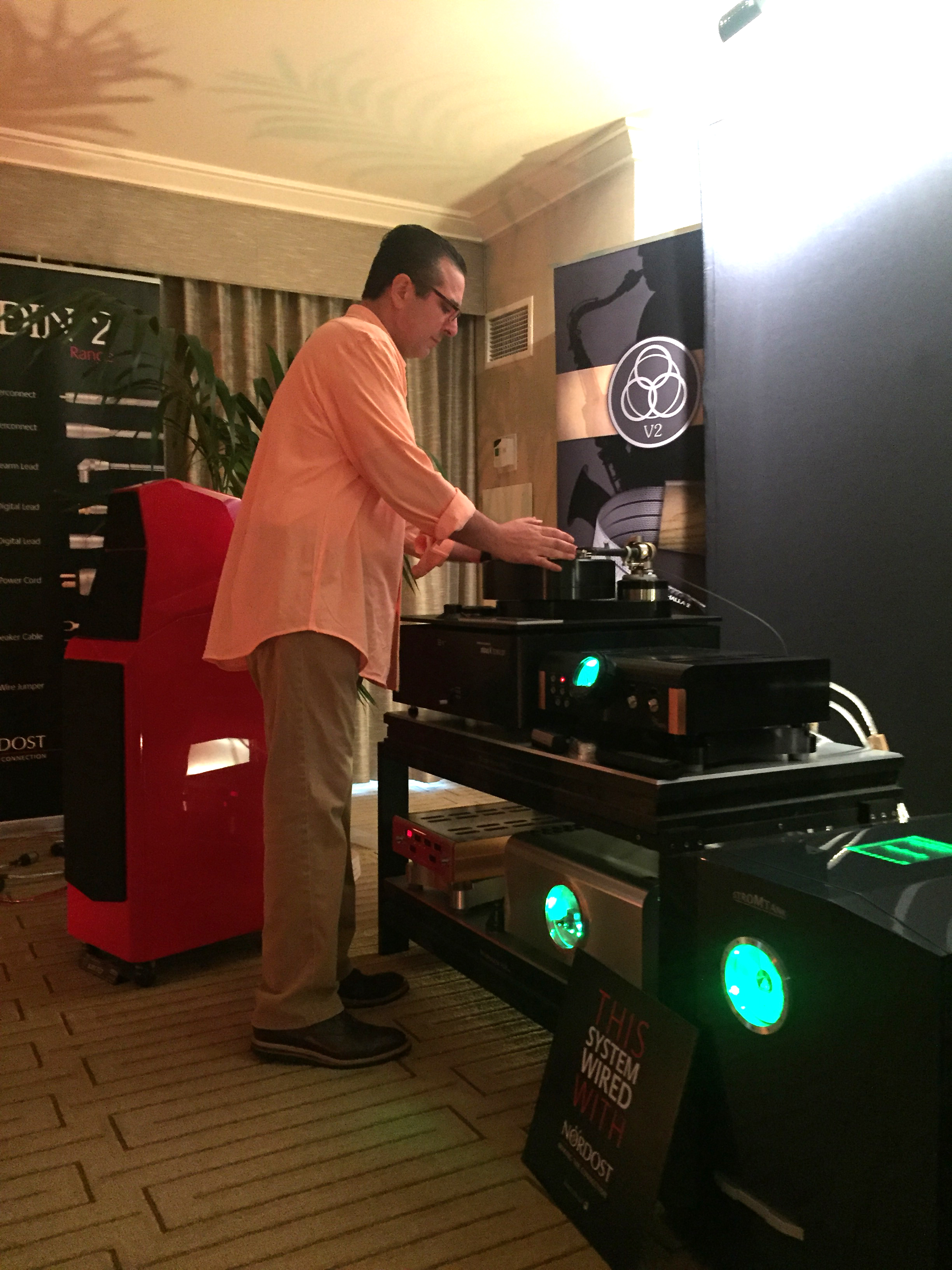 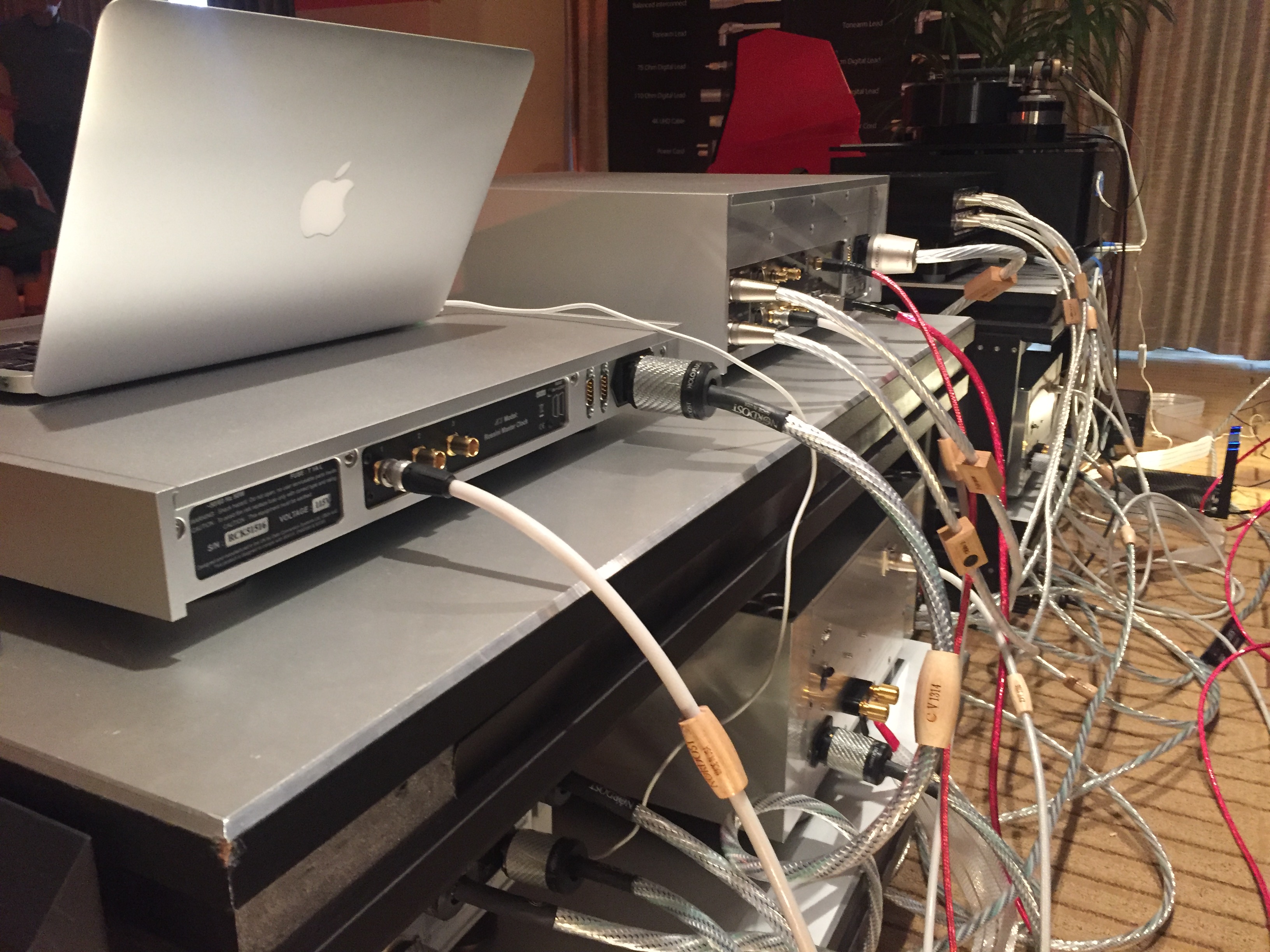 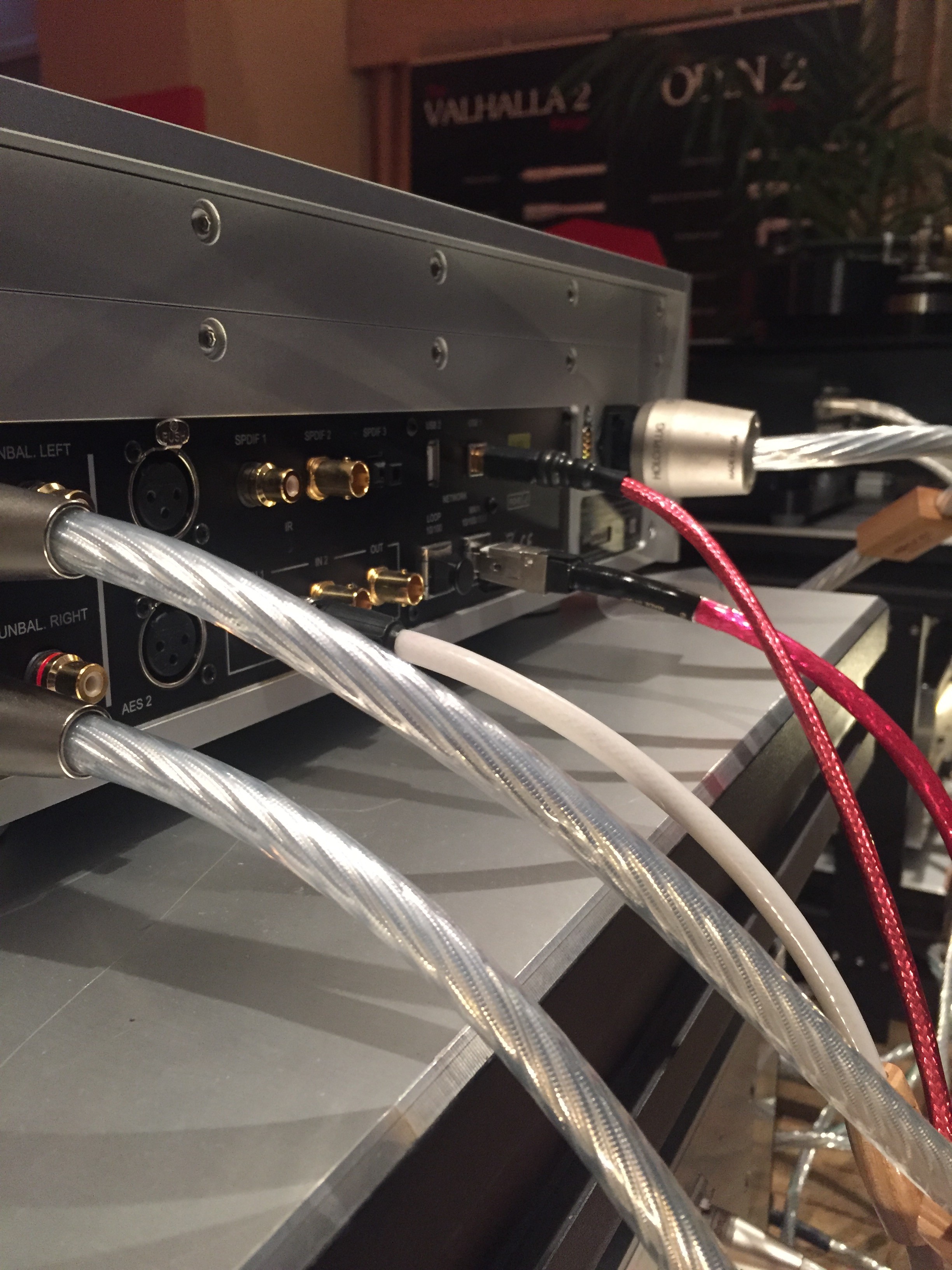 We used the amazing Wilson Sasha 2s in our system 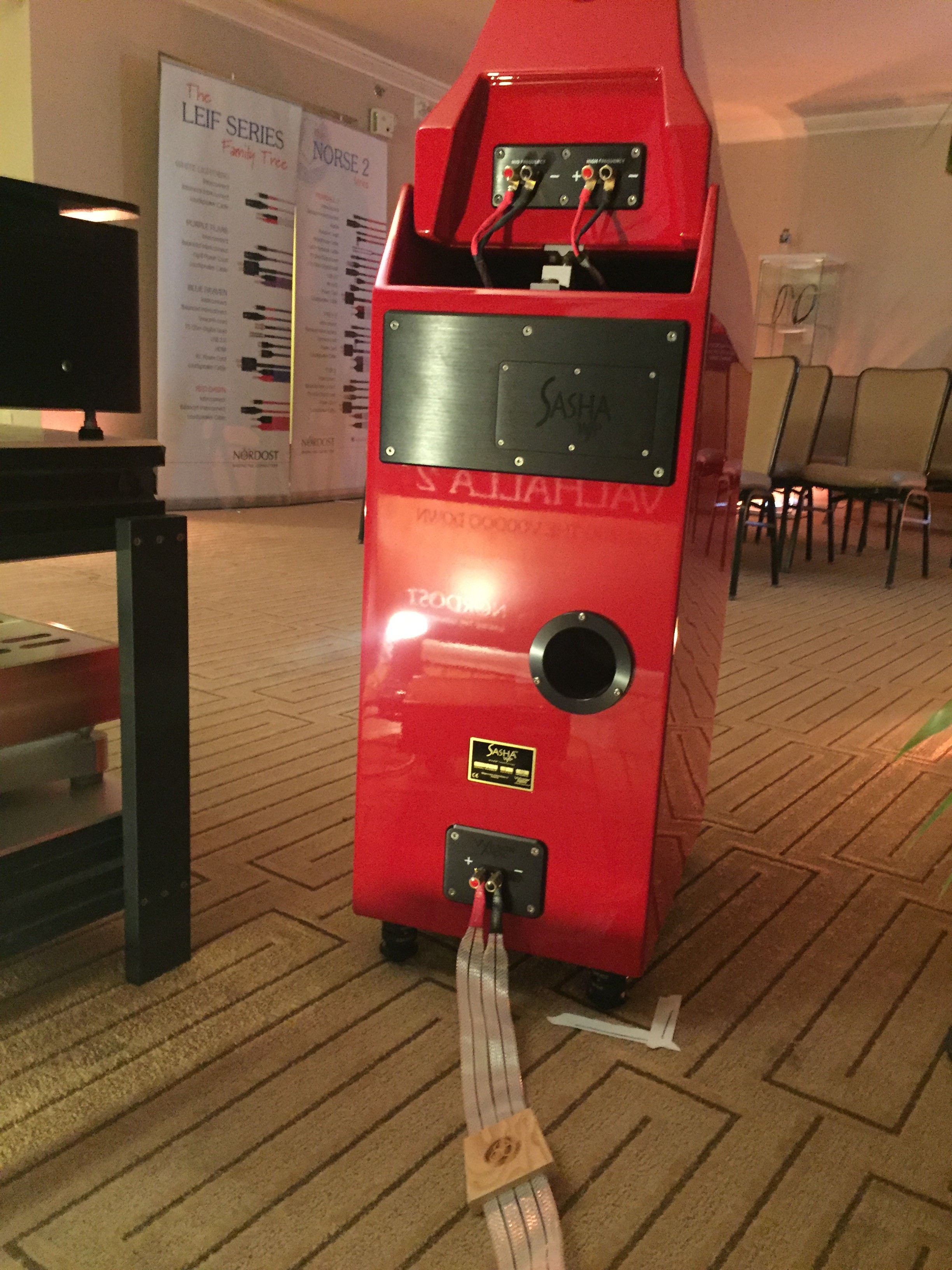 As always, we had our system equipped with QRT 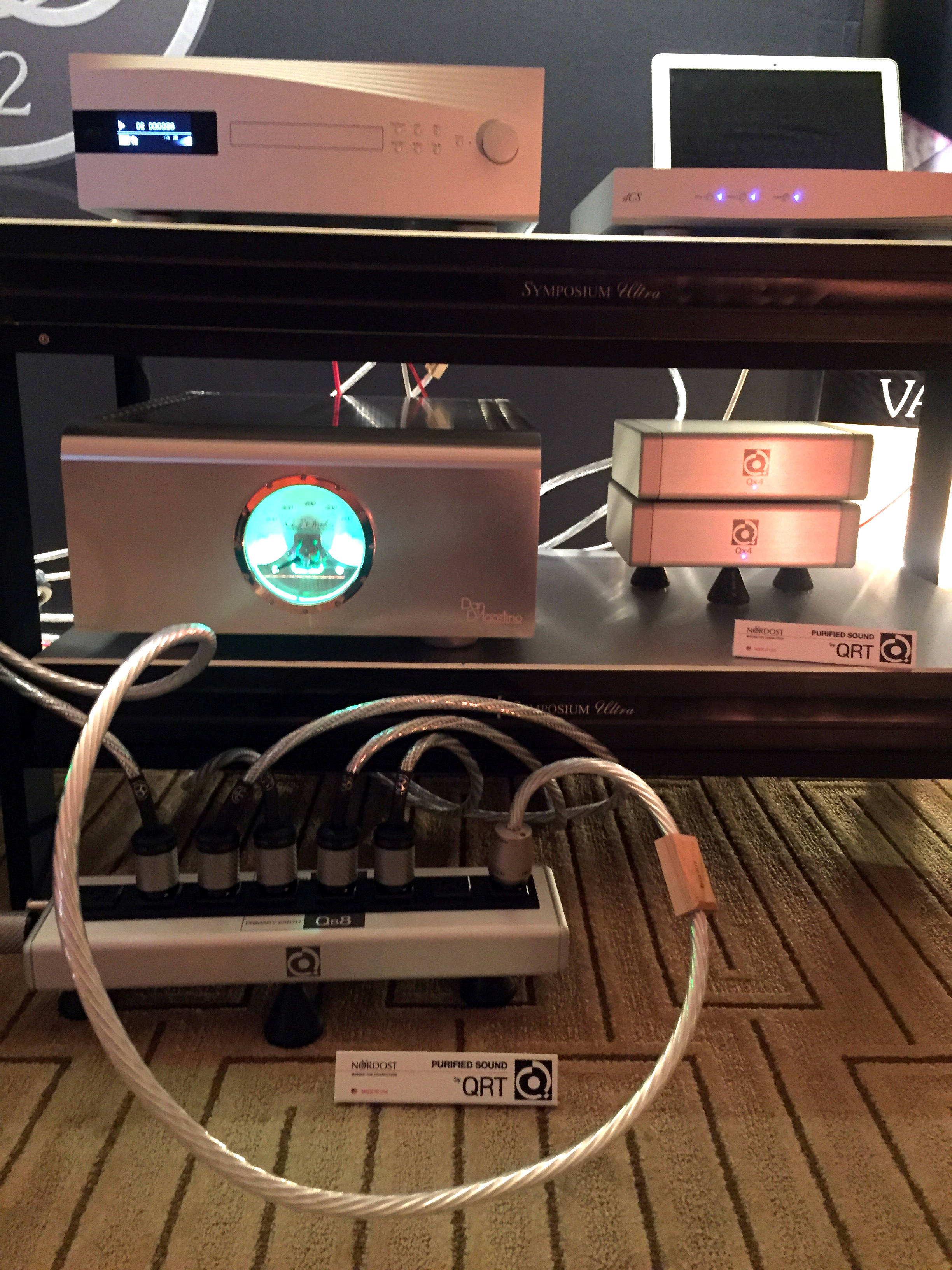 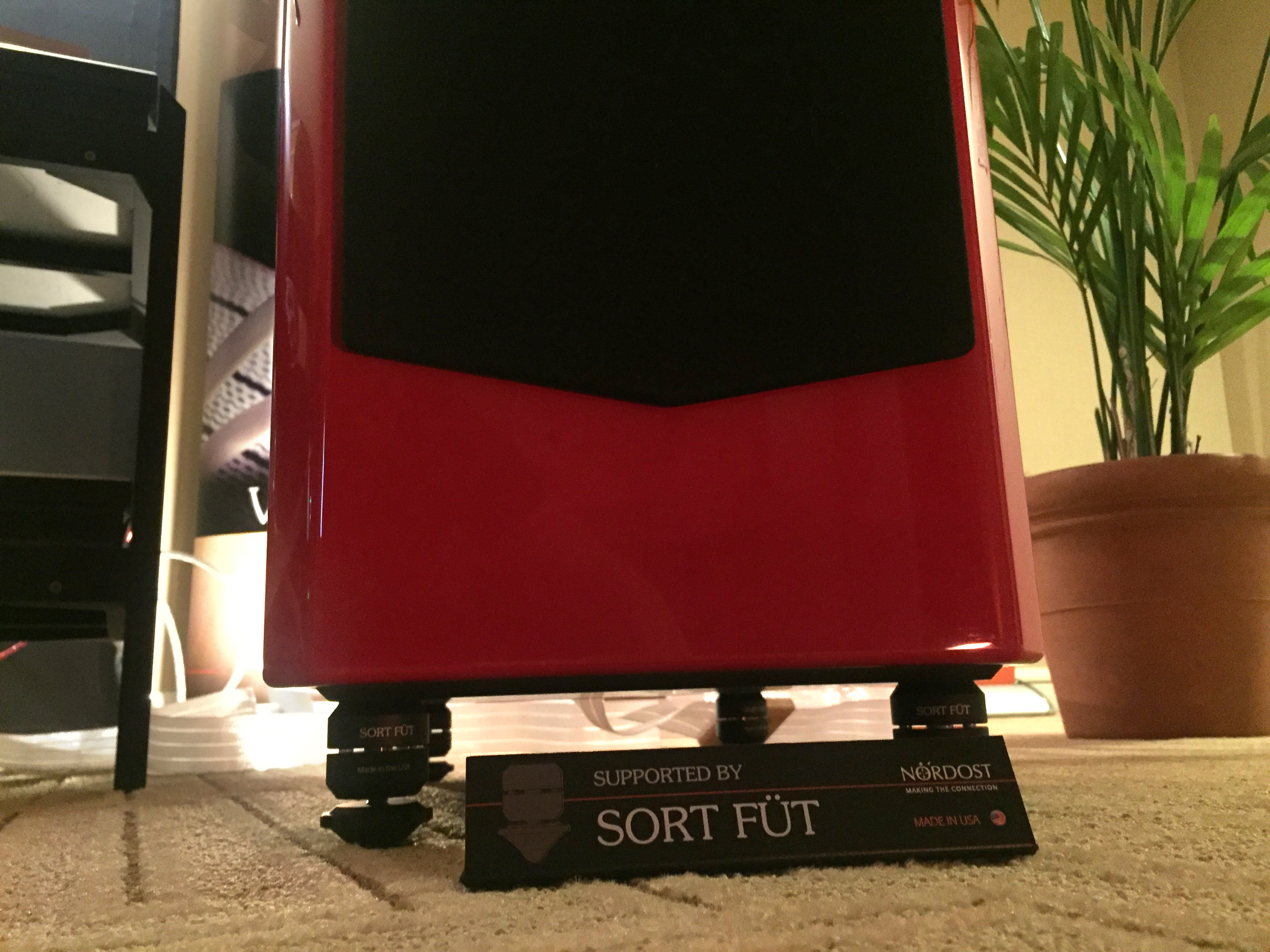 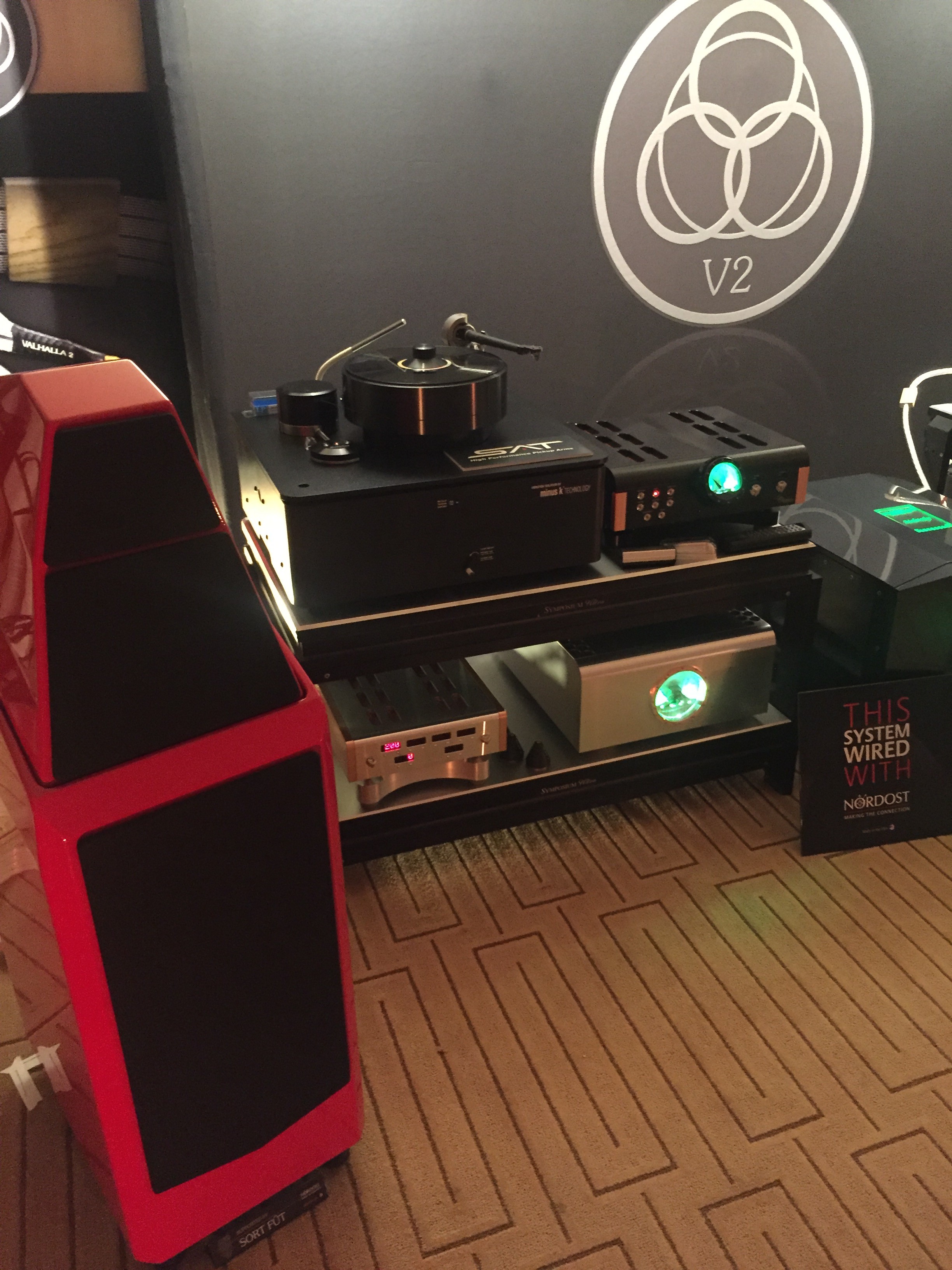 The Nordost room wasn’t the only place to hear Nordost cables in action:

Nola’s room was outfitted with Odin 2 and had their speakers internally wired with Nordost too! 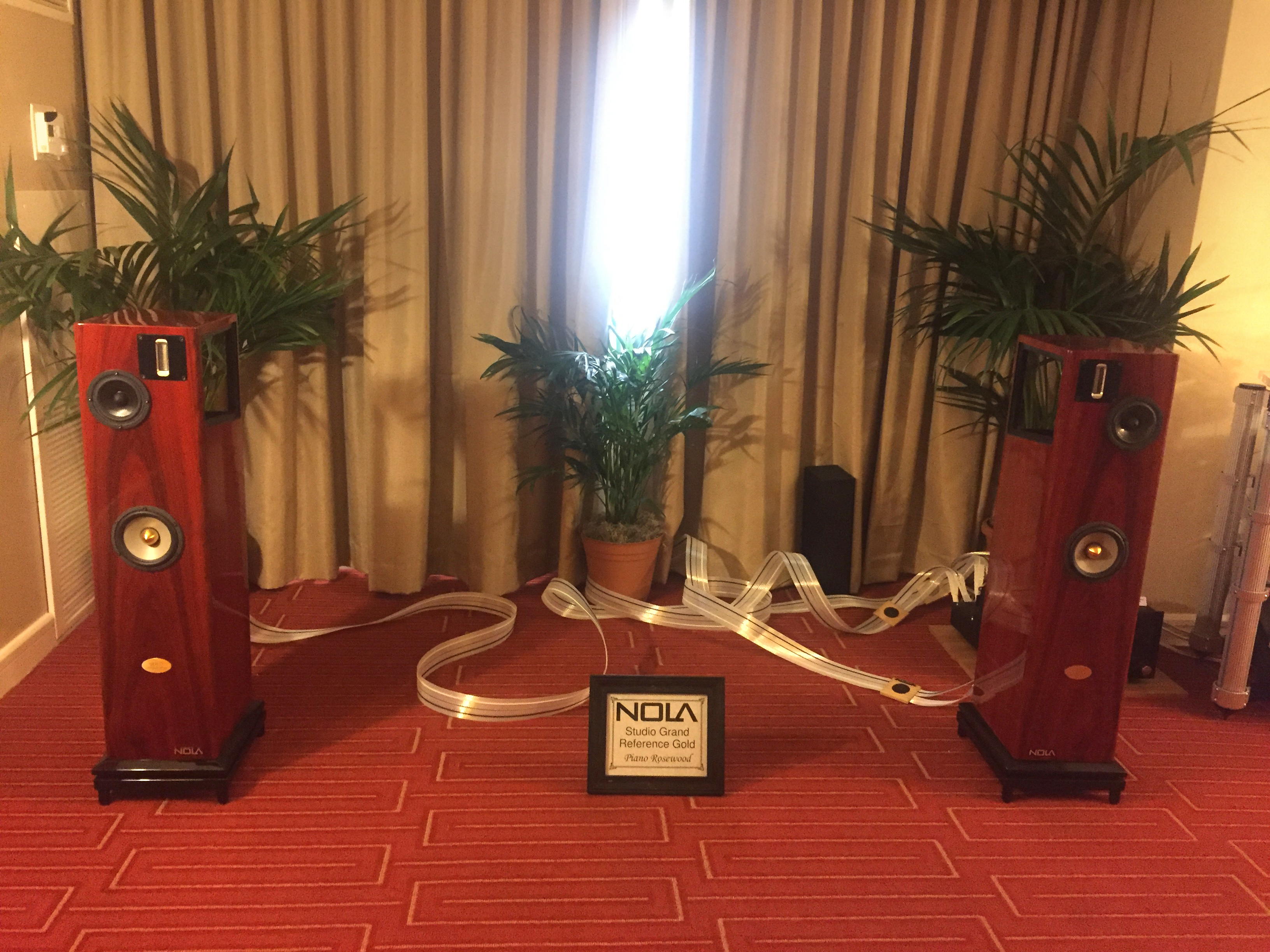 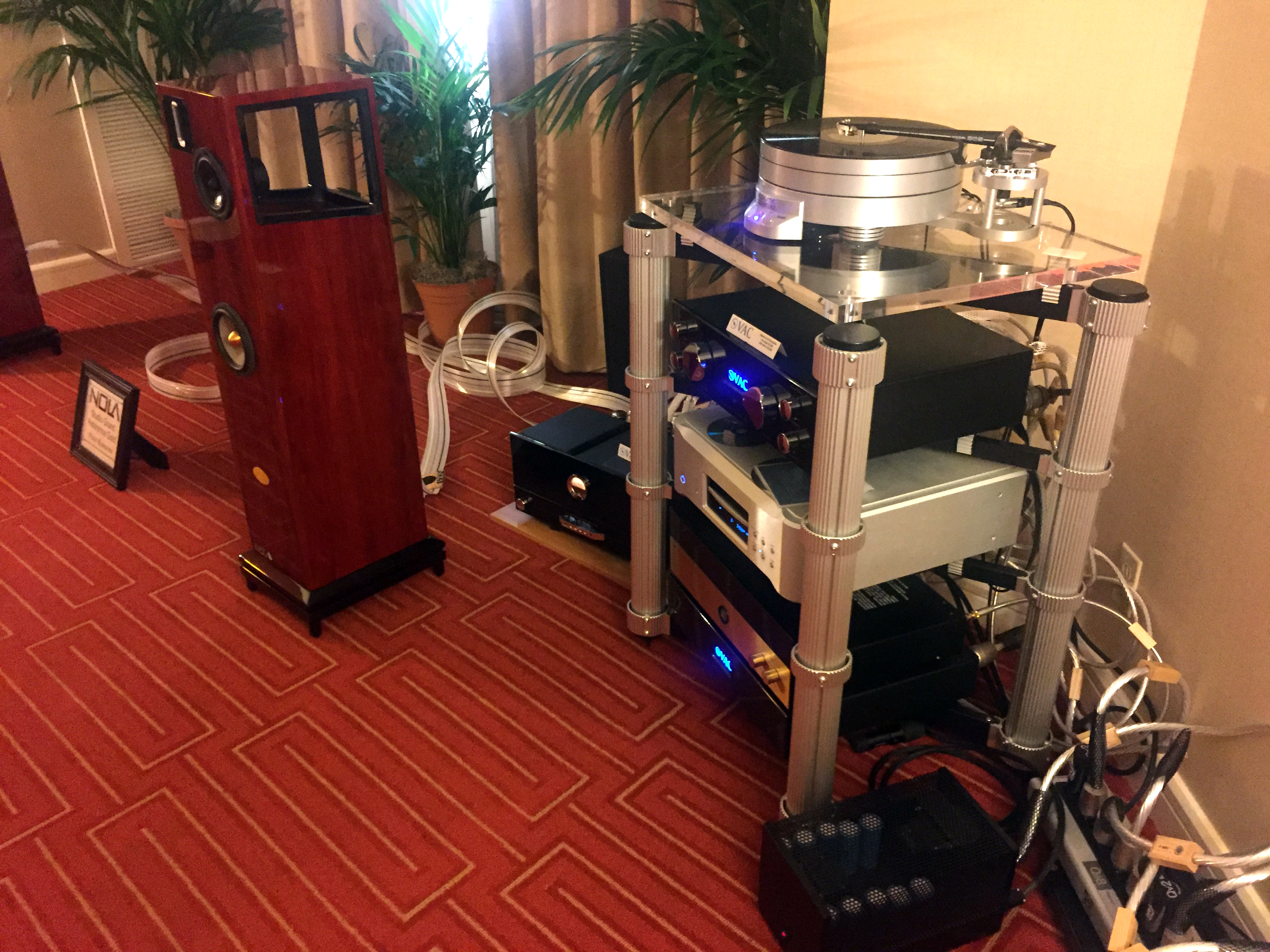 Source AV had a Questyle and Focale system wired with Nordost Red Dawn cables, as well as several headphone rigs using our QRT, Sort Kones, and some Nordost cabling. 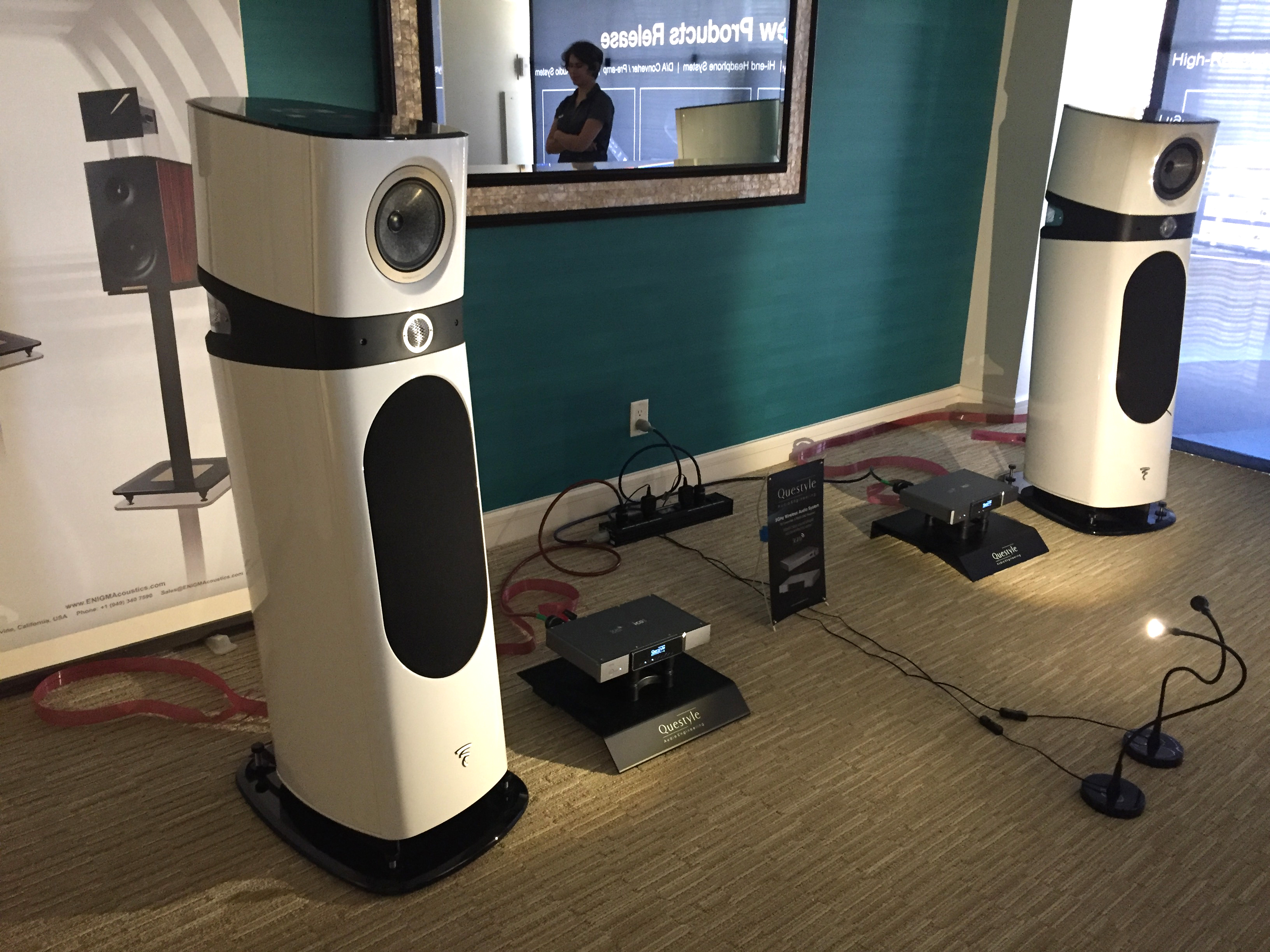 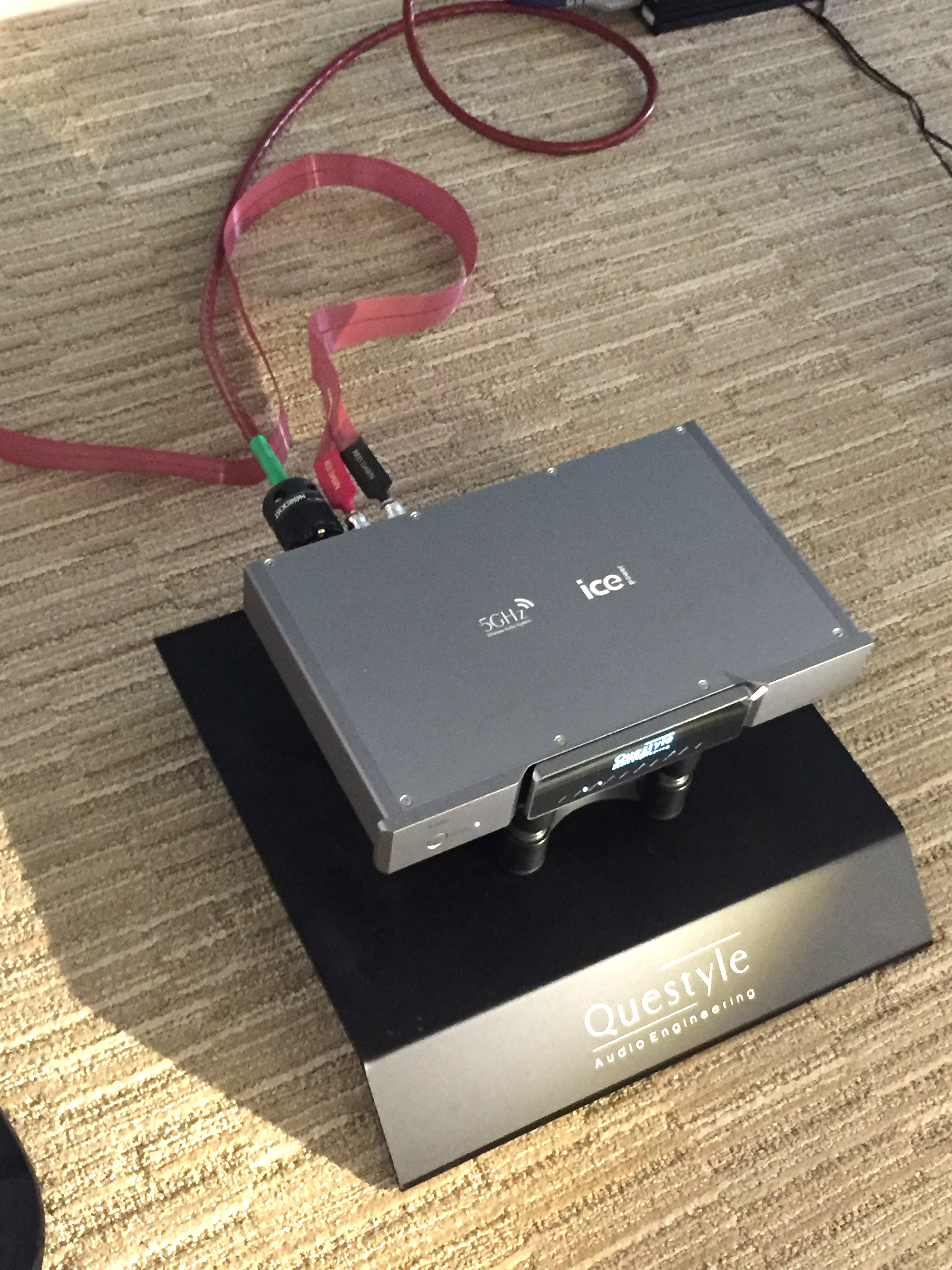 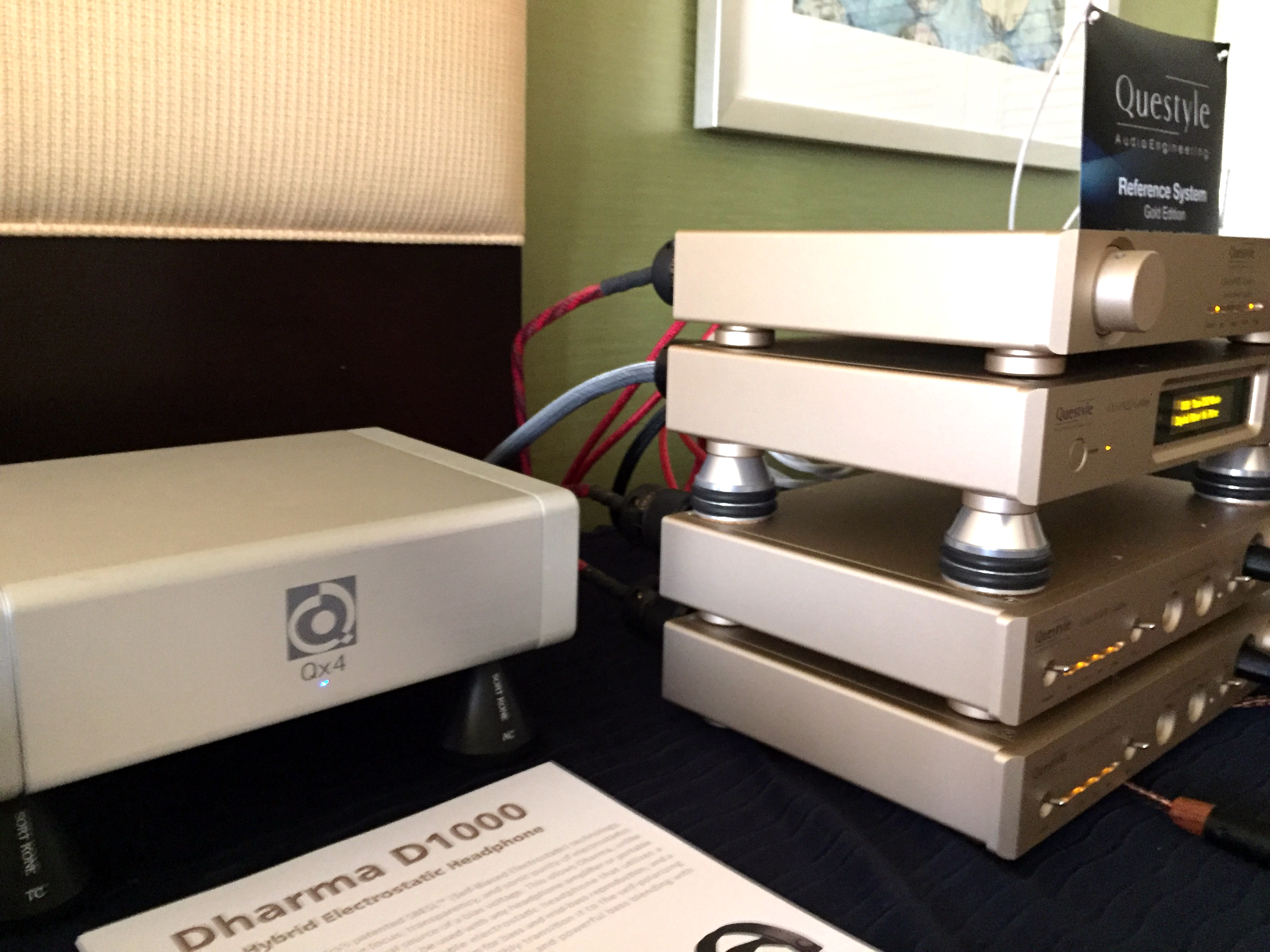 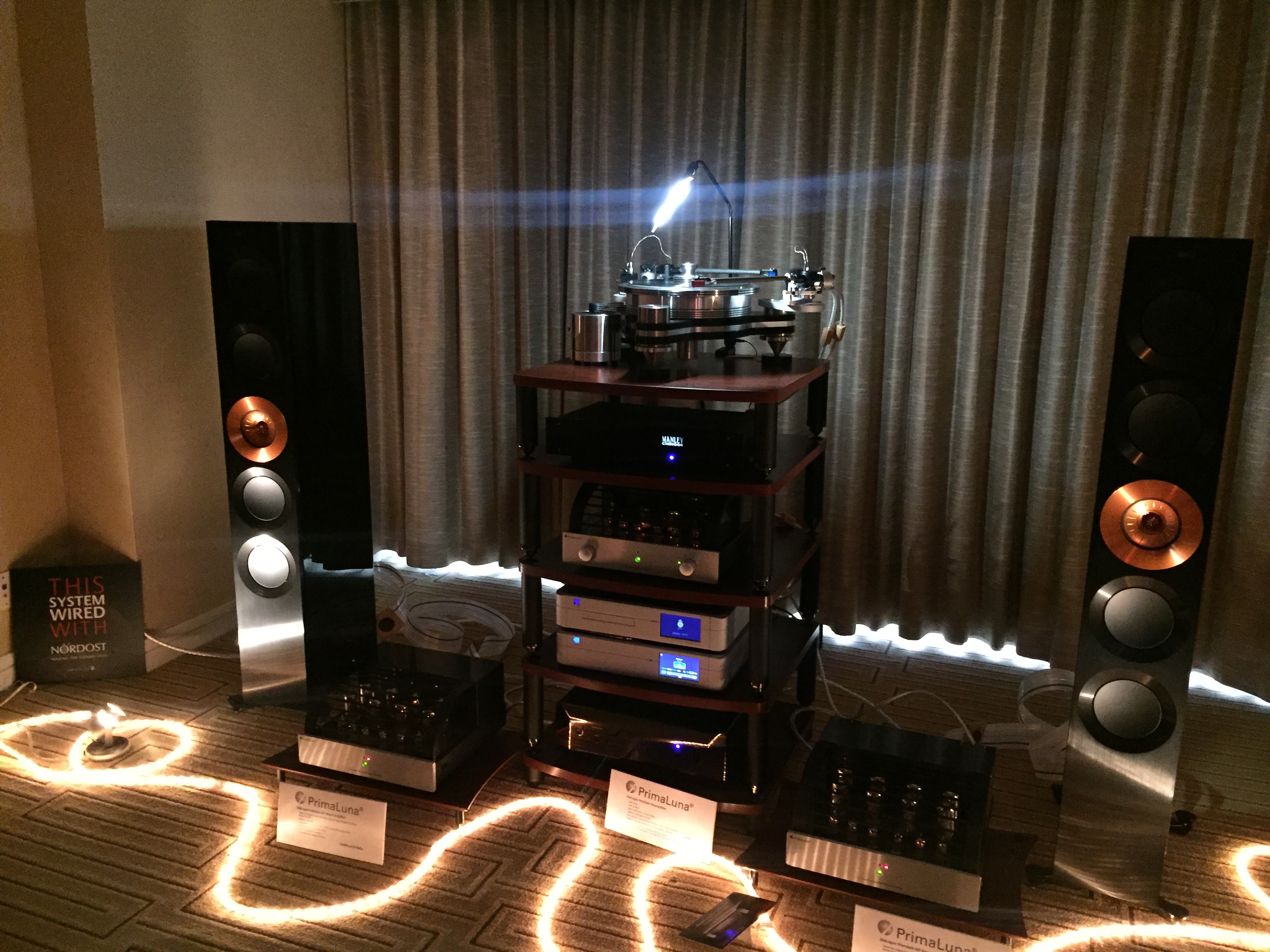 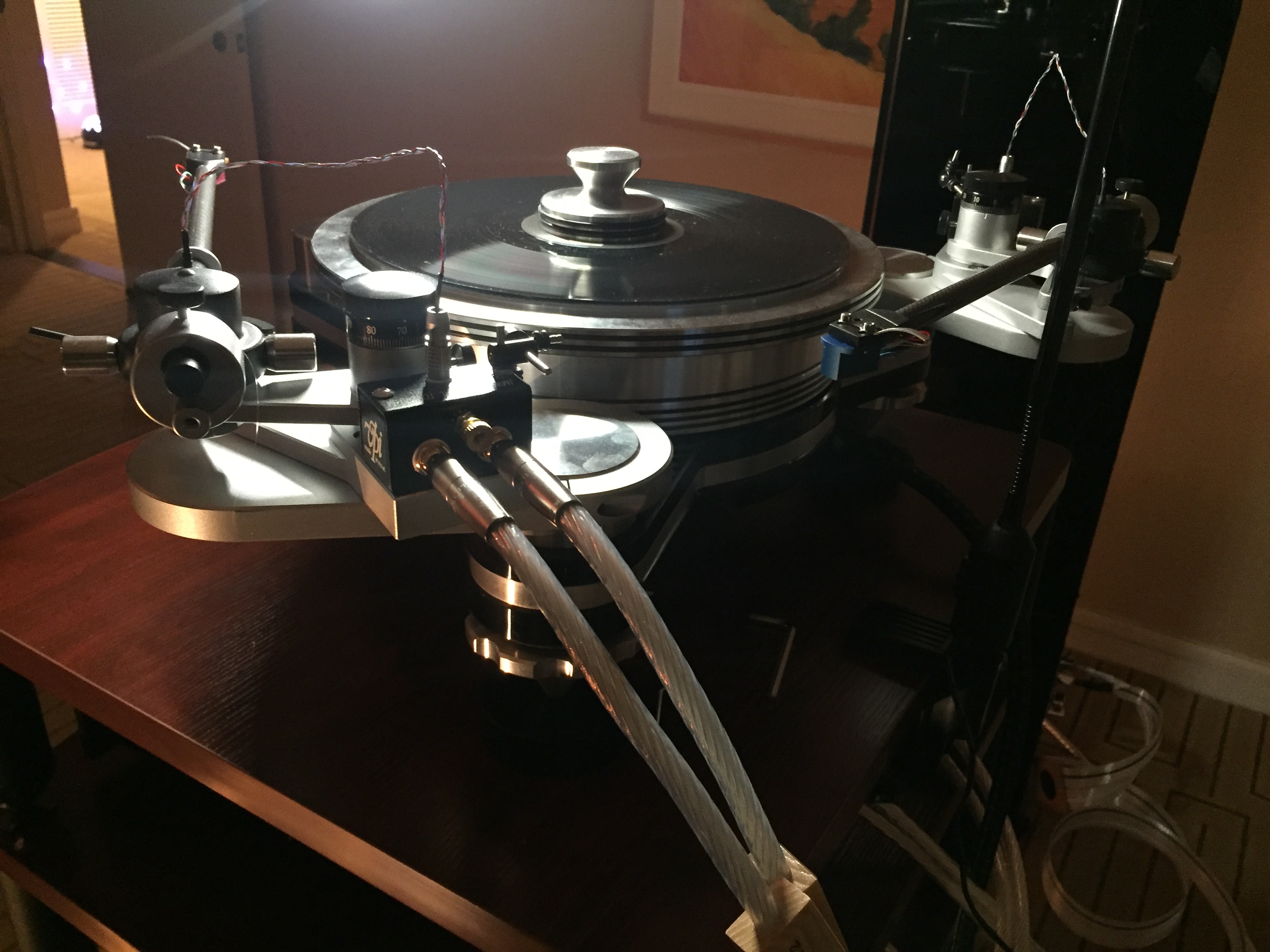 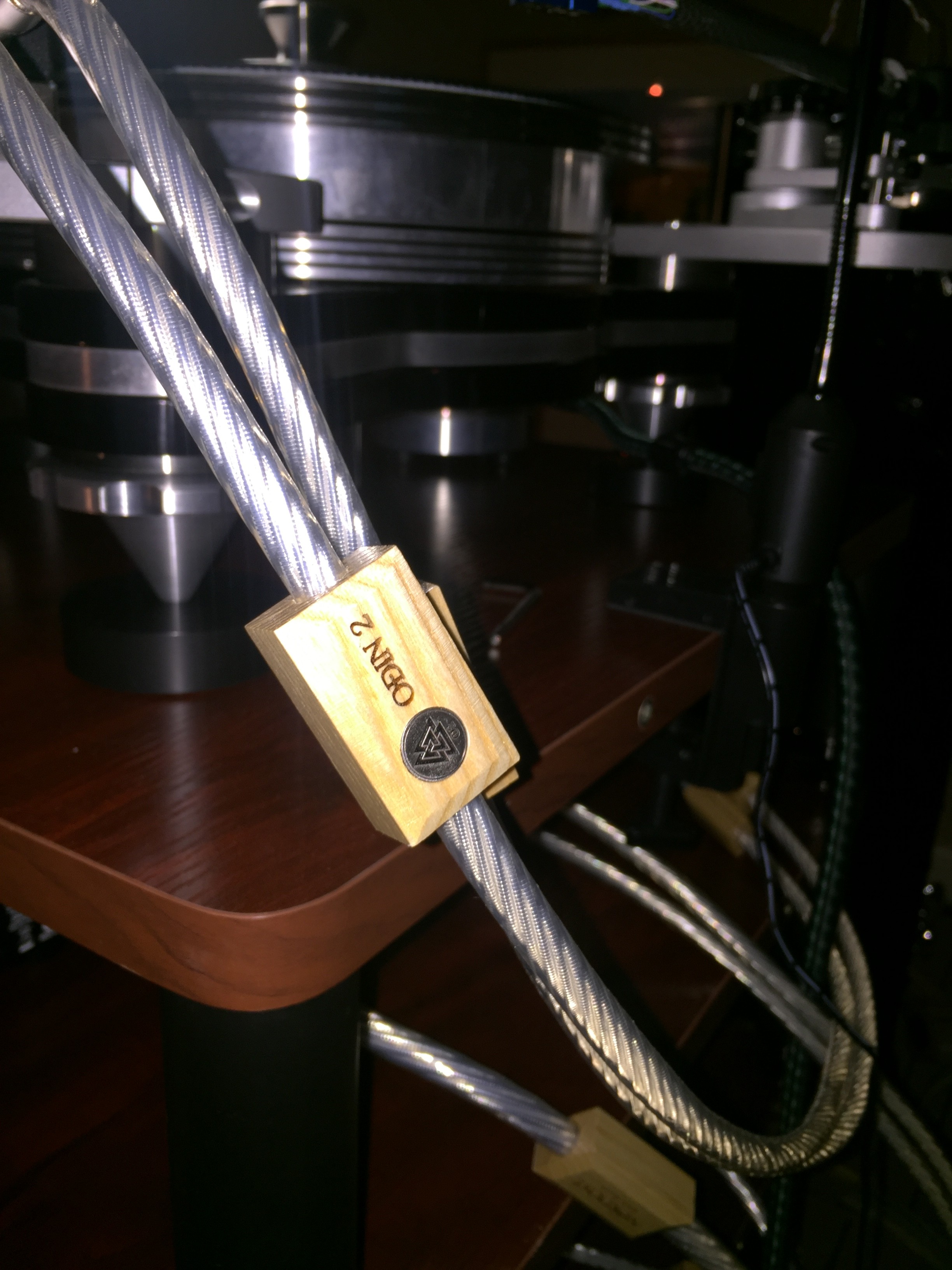 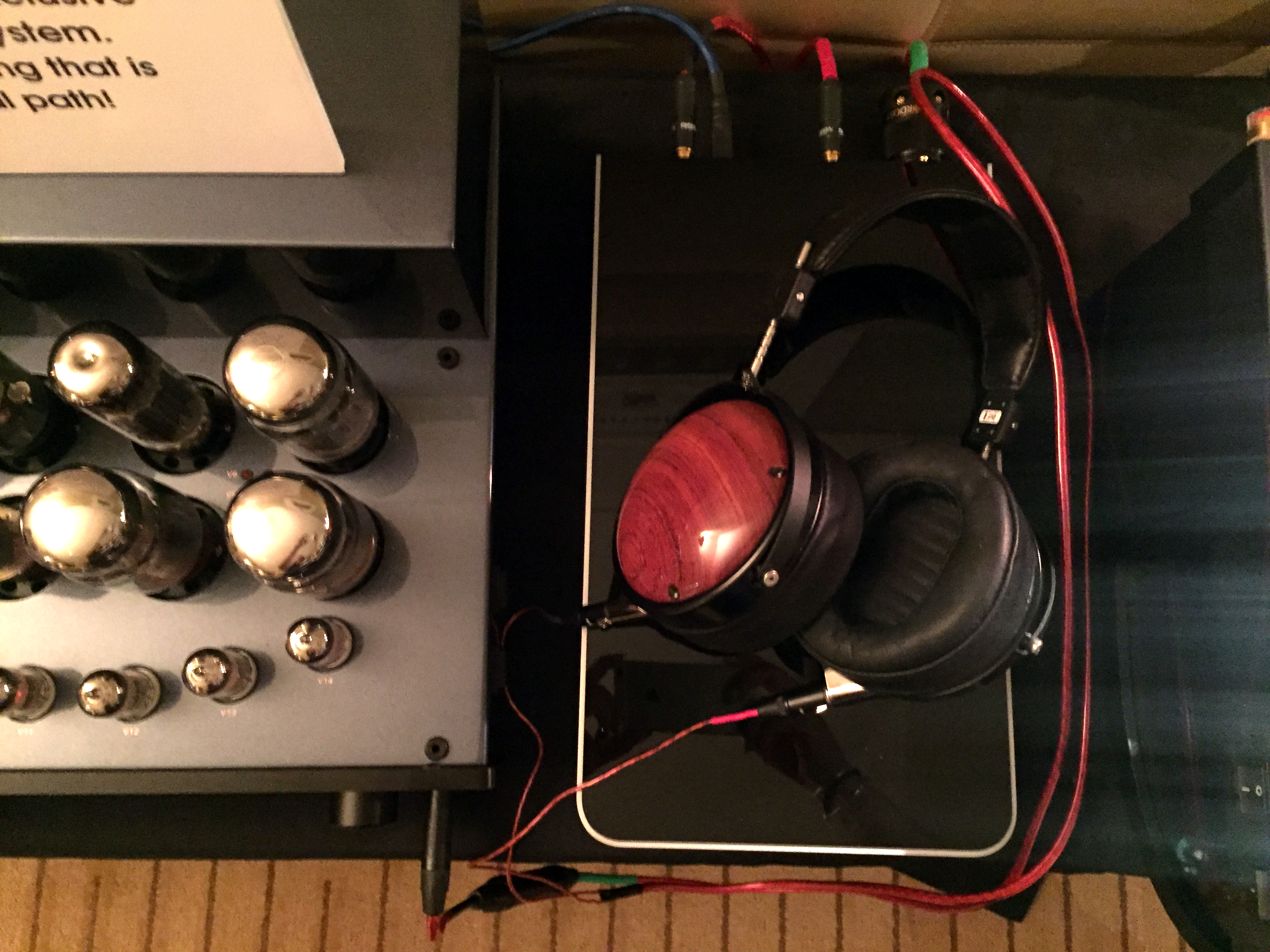 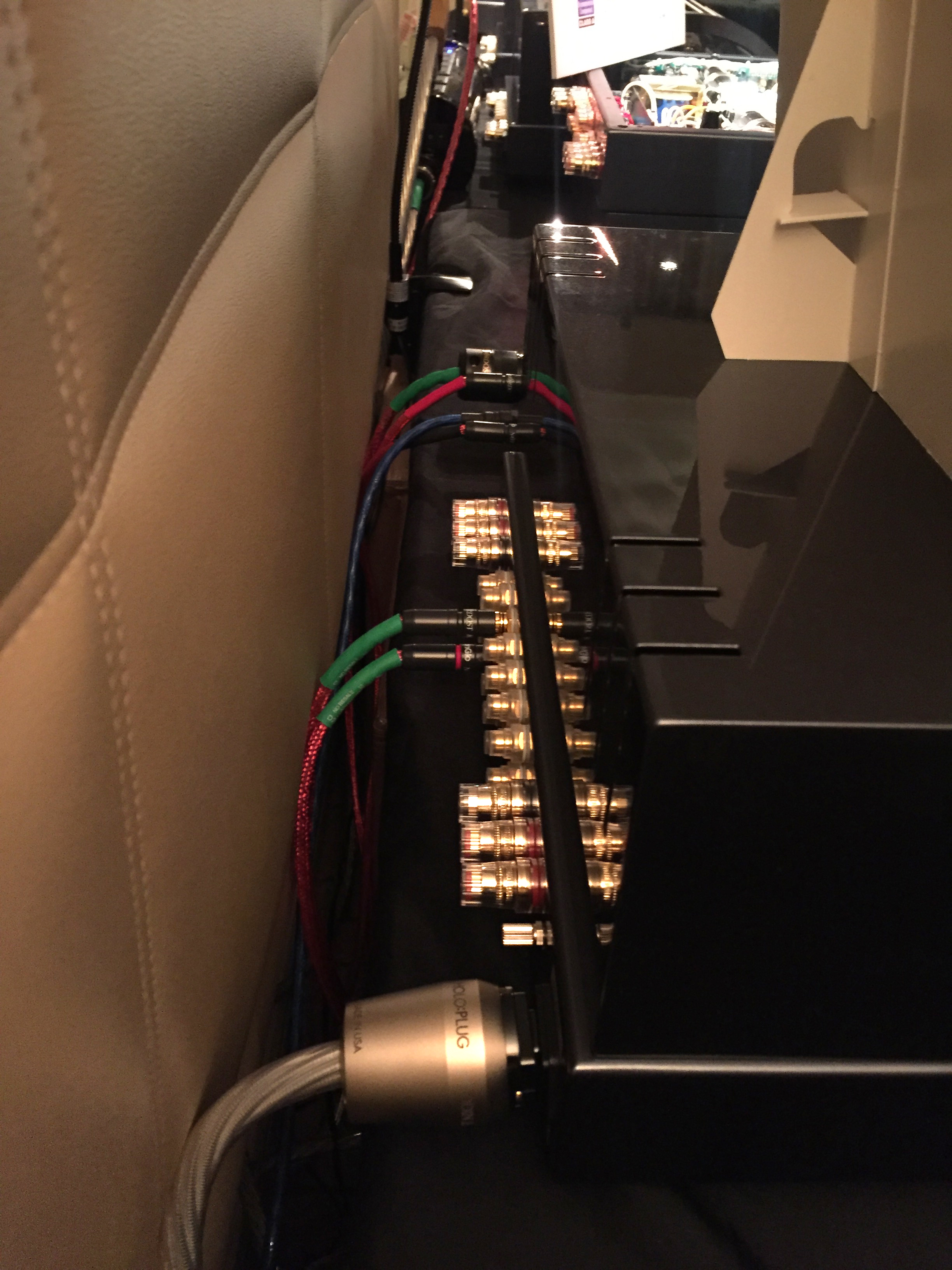 Sonic Flare’s room was put together by Danny Kaey, with Wilson speakers and Einstein components, and wired with Valhalla 2 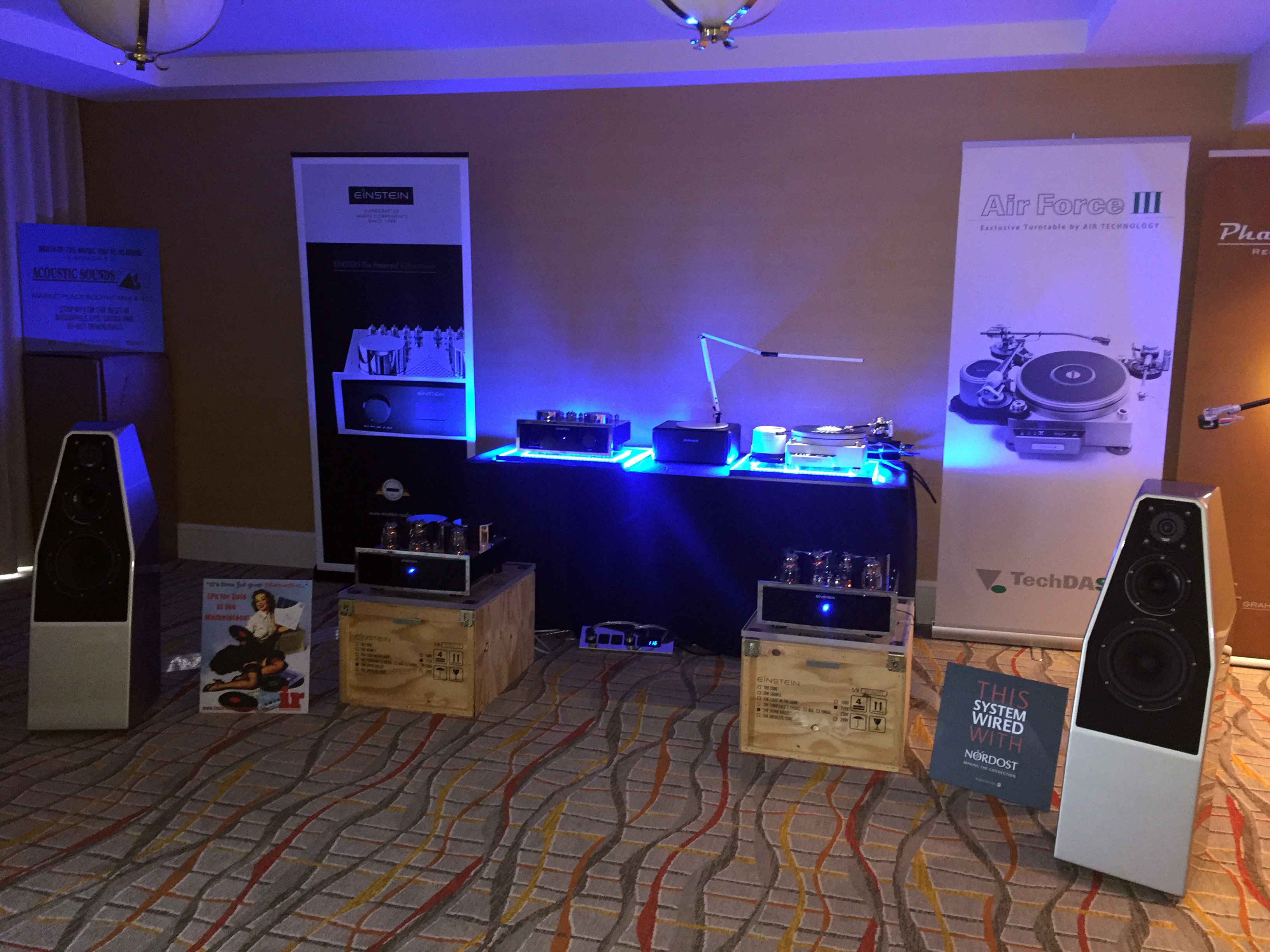 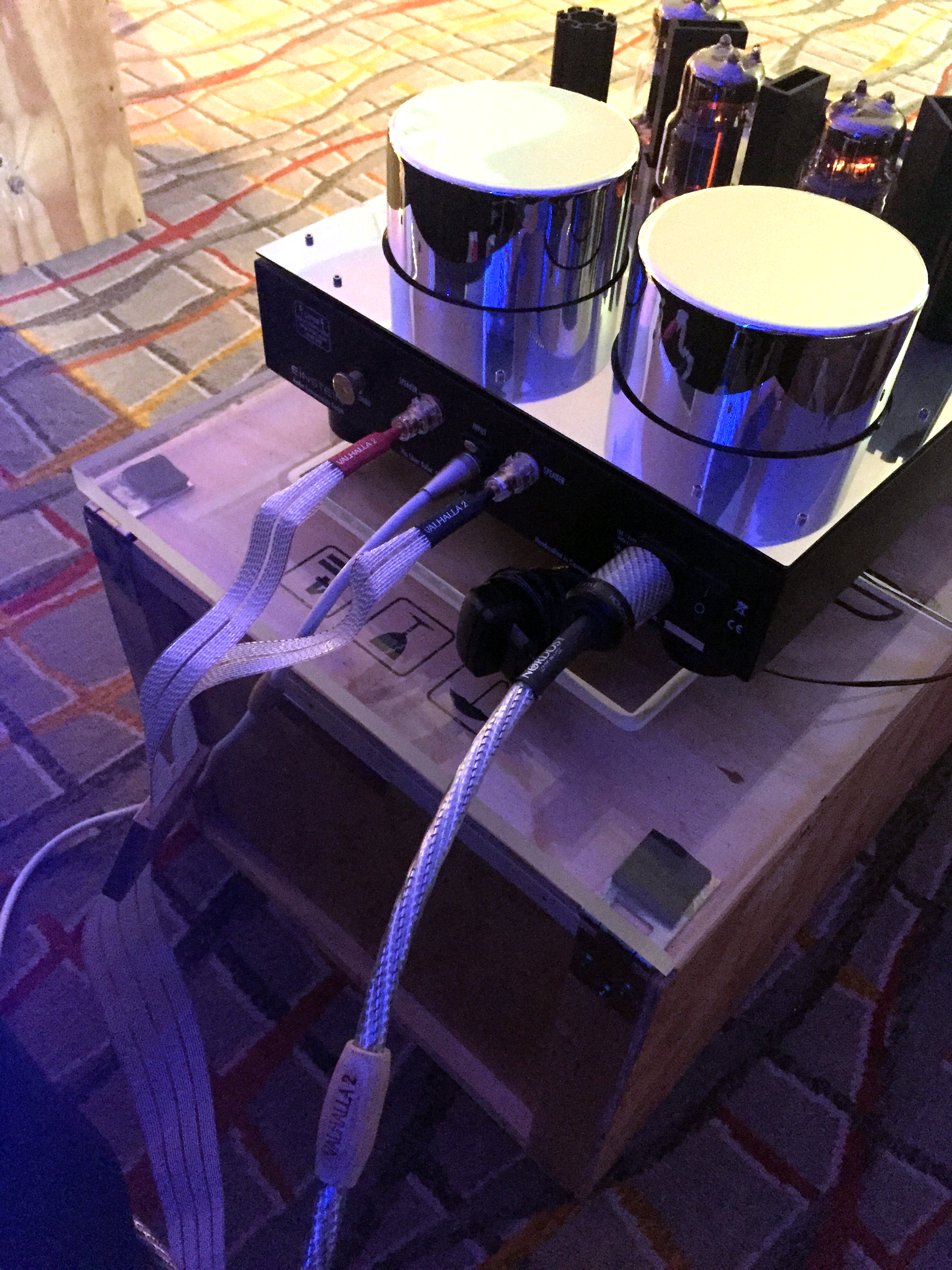 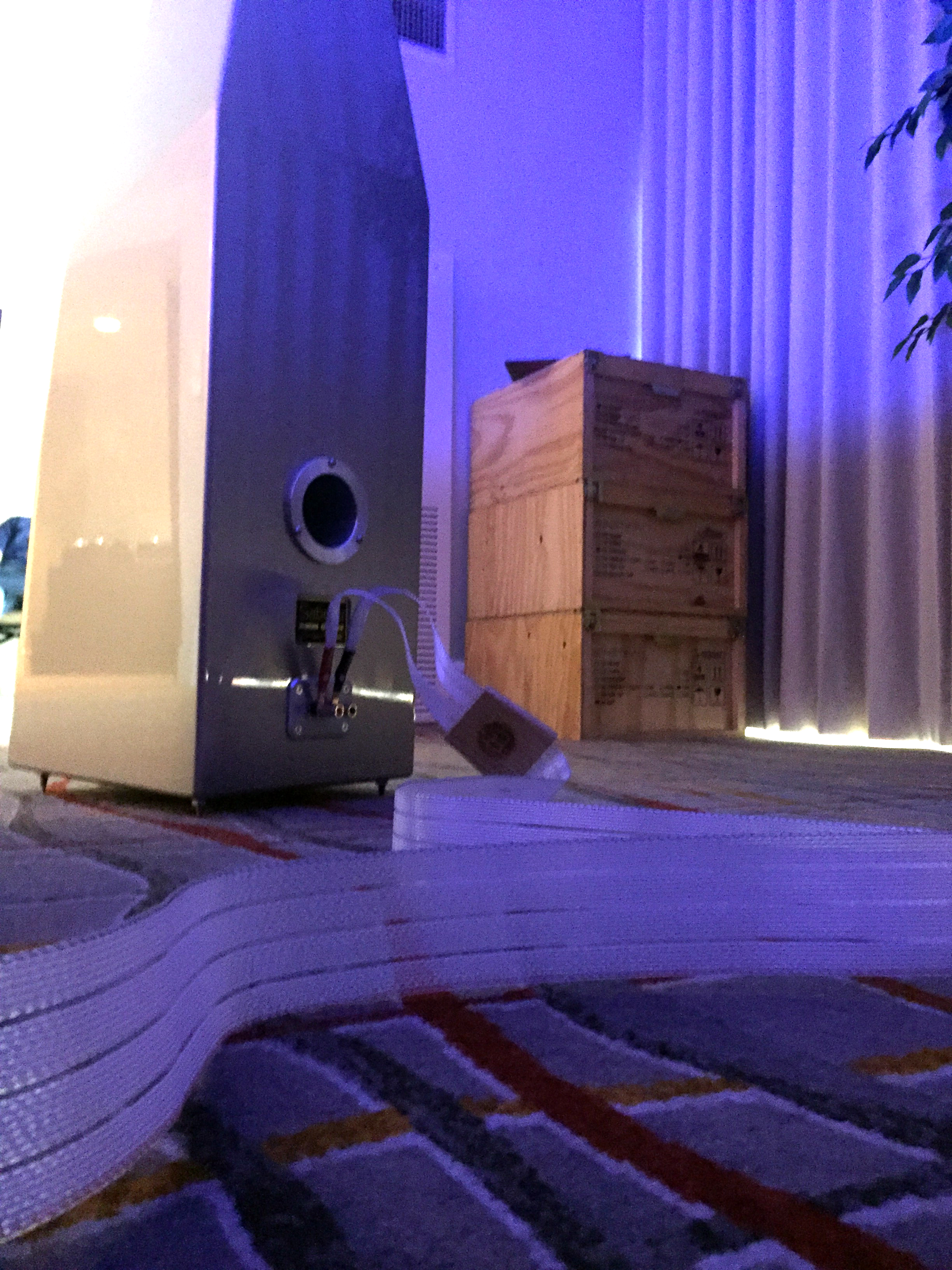 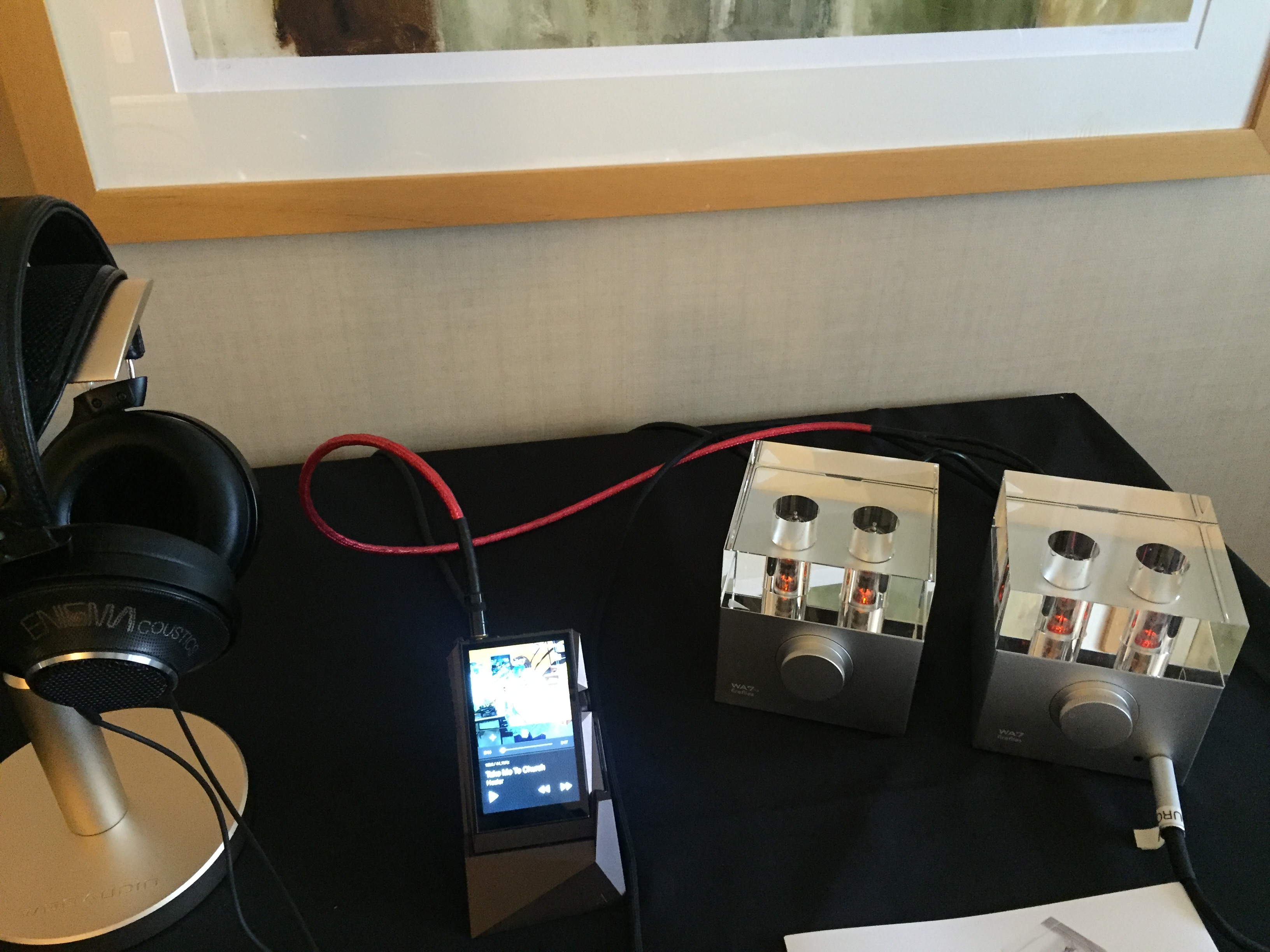 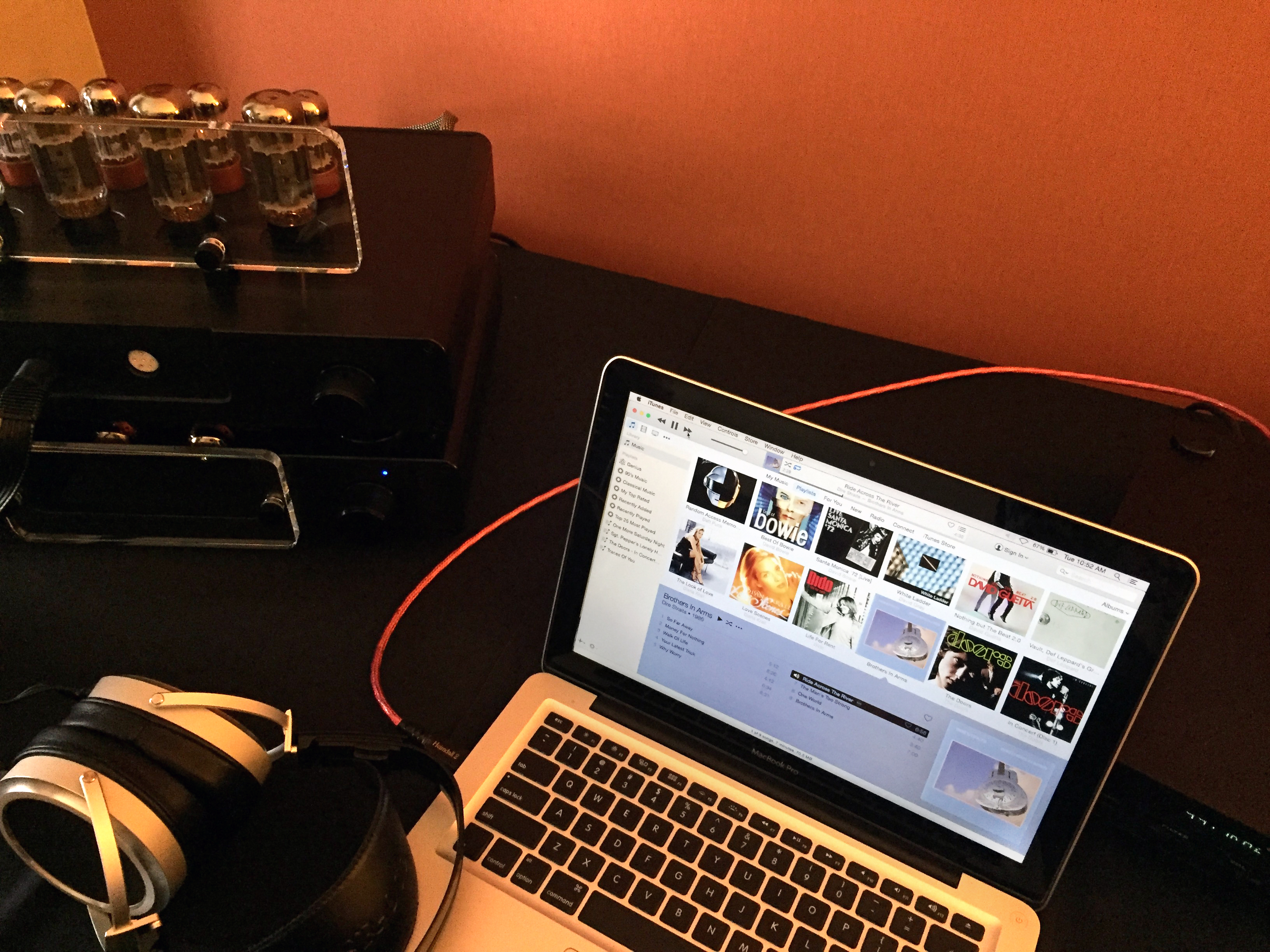 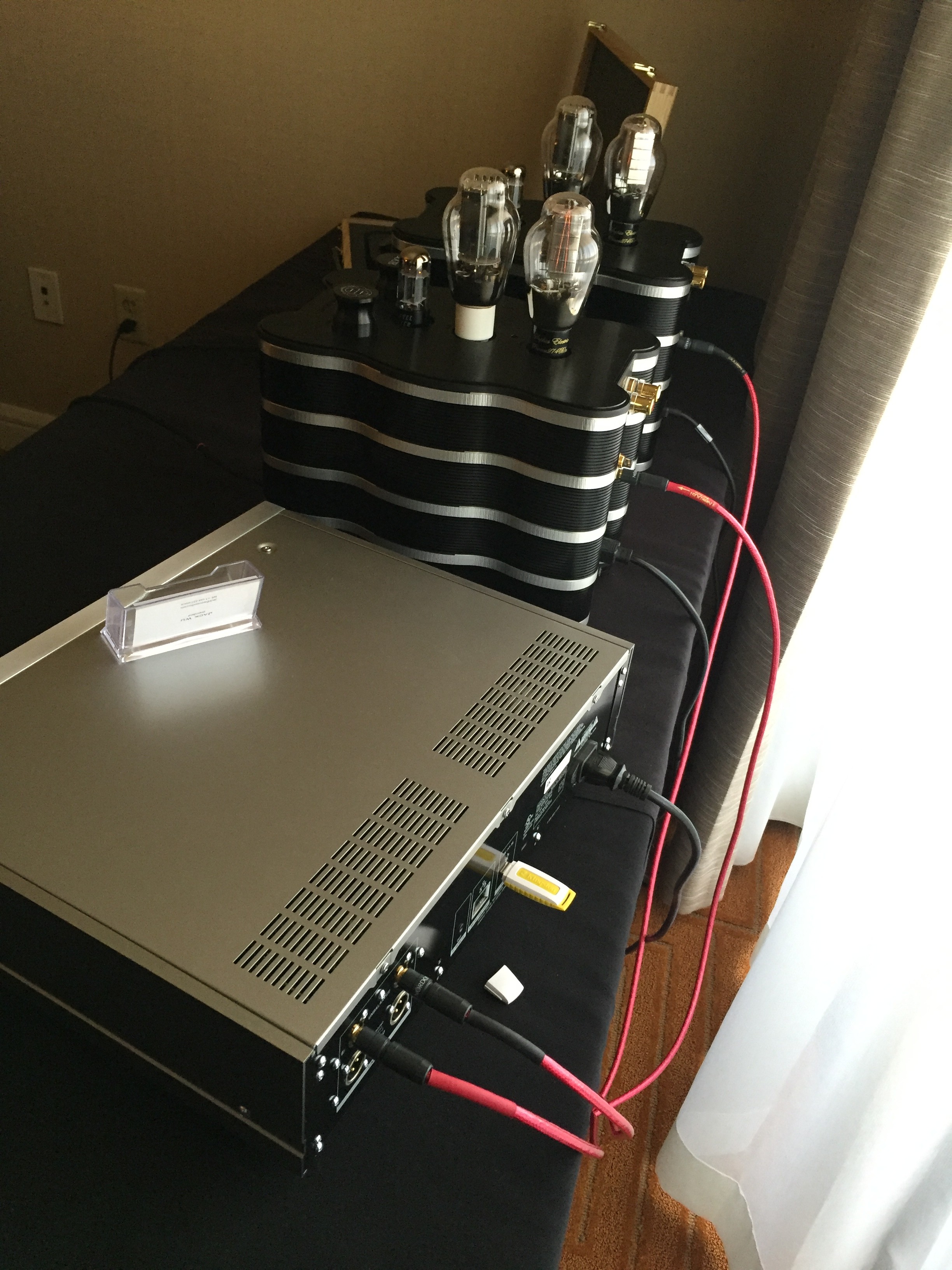 HD technology has gone through several revision changes, modifying specifications and undergoing upgrades both in electronics and the transmission line itself. In response to these changes, Nordost came out with two Ultra High Definition cables last year, both in our Heimdall 2 and Valhalla 2 ranges. Our American-made UHD cables more than quadruple the bandwidth of typical HD cables, allowing viewers to appreciate 4K feature sets, including increased frame rates and Deep Color.

Marc Mickelson, of The Audio Beat, was able to speak to the differences our Heimdall 2 UHD Cables make in his recent article, Hi-Fi Video: Nordost’s Heimdall 2 4K UHD Cable:

“We’re all experts on what does and does not look real, so when you see reproduction that’s closer to real, you know it, even without having to wonder. The Heimdall 2 provided that sense of knowing.”

You can now read Marc’s full article in the review section of the Nordost website.

As one of America’s premiere Audio & Video retailers, Charlie Santmire and crew have been serving music lovers for over 46 years, right in the heart of the U.S.A.  Their state-of-the-art showrooms, as well as the professionalism and enthusiasm the entire staff that work at The Sound Environment display, are second to none. 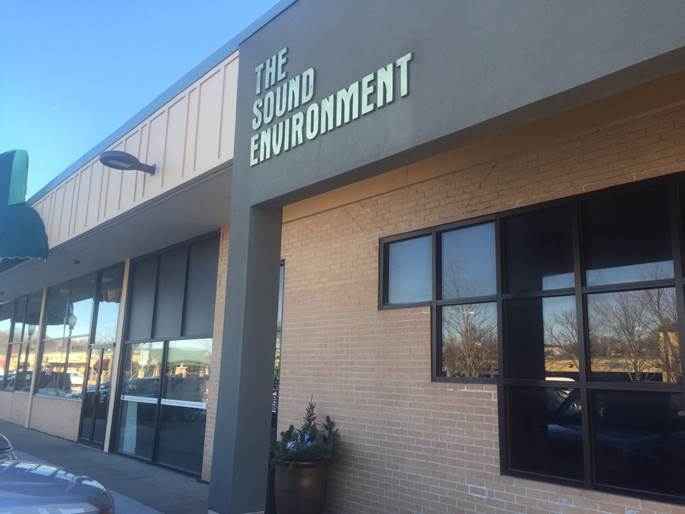 Nordost is proud to be one of the exceptional manufacturers that The Sound Environment has chosen to work with, serving their customers with the best products that hifi has to offer. Nordost’s flagship Odin 2 cables and Reference Valhalla 2 Cables are on display and ready for auditioning, alongside other world-class brands such D’Agostino, Wilson, VTL, dCS, Rockport, Focal, Naim, HRS, and many others.

The individualized care and dedication that The Sound Environment shows is not lost on their faithful customers, as shown here in this quote given by one of their recent clients:

“[The staff of The Sound Environment] emphasize value at all price points, whether that be a mega-bucks, world-class system or simply a small, desktop system you could use at your computer. Regardless of your budget, TSE will provide you with the highest quality sound and video for your money. Period. Beyond that, they have an immensely helpful and patient staff of experts that are as passionate about what they do as anyone in any field.  I would absolutely, without hesitation or equivocation, recommend TSE to anyone who values high quality sound and video.” 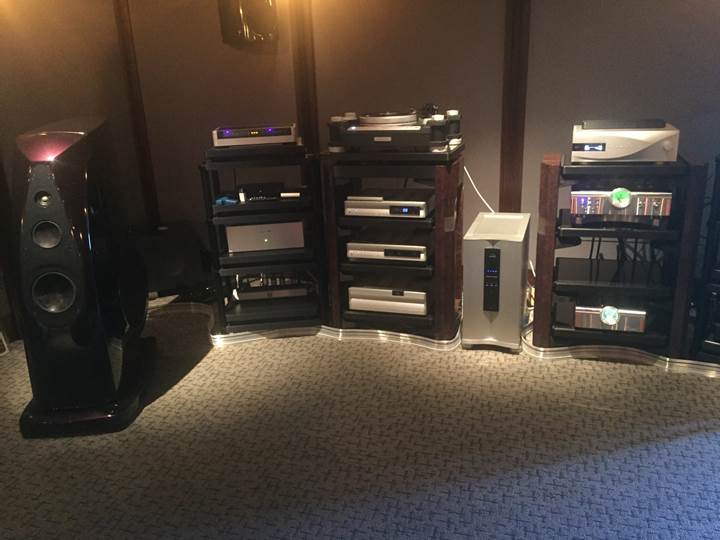 So, the next time you find yourself in Omaha on your way to a meeting with Warren Buffet, stop by the friendly, professional folks at The Sound Environment.  It’s an experience you won’t soon forget!

Here are some of the songs that we will have on rotation this June.