Nordost is often pigeon-holed as a company that exclusively offers reference-level products, but that is not the case. Nordost offers a complete range of products that does include cables that are designed for the highest end systems conceivable, but we also offer cables that are perfectly paired with even the most modest of hifi systems. That is why we are especially excited when we get reviews of our introductory products, so that people can see how transformative our most elemental cables can be! In his latest review, Jeff Dorgay of ToneAudio took a look at our White Lightning Speaker Cable. The jump in clarity that he experienced leads him to recommend this introductory cable to any audiophile who is looking for a modestly priced upgrade to their system.

“The result with the White Lightning cables was dramatically better than anything else I’ve used that is comparably priced and could live happily ever after with these cable in that system.”

The first ever Toronto Audiofest was the perfect kick-off of what is sure to be a institution in the Canadian audio community. It was great to see so many new faces coming out to enjoy music together on some outstanding systems. Thank you to our amazing Canadian retailers who represented Nordost and our products so well, producing some stellar sound. We were especially pleased to be working with our Toronto-based dealer, Executive Stereo, who supplied us with stand-out gear for the event.

Atoll Distribution used our Blue Heaven Cables in both of their systems:

By Dennis Davis, The Audio Beat 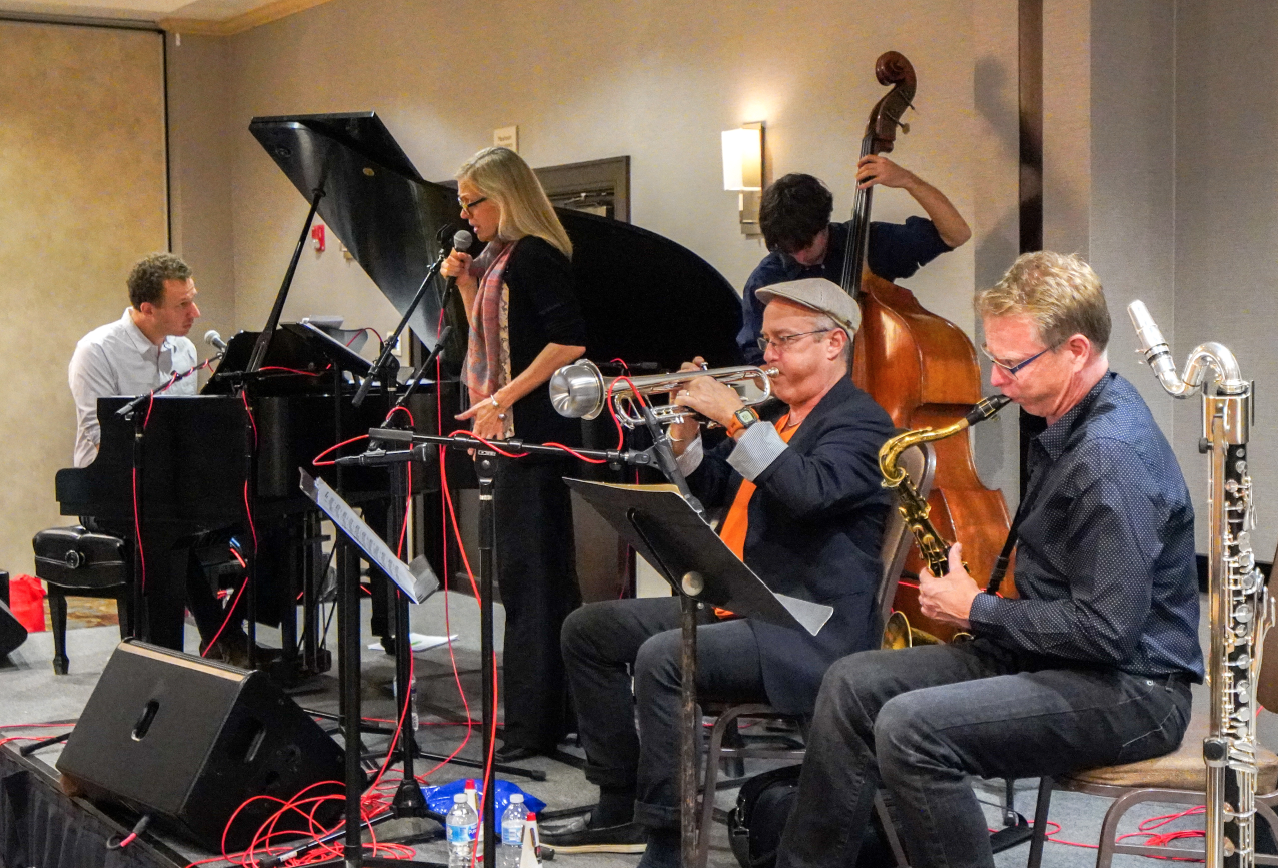 Let’s face it—most people who attend hi-fi shows don’t make the trek there to attend live concerts.  Musical performances at shows are usually limited to solo performers who have recorded on niche audiophile labels where the biggest selling point is often the label and its recording process.  Performers who have contracts with Universal, Sony, Blue Note or ECM are not in the habit of performing for a bunch of tired audiophiles, who pay nothing at the door and show up for the concert if they feel like it.

In that context, when I learned that Nordost was presenting a concert of jazz musicians from the Newvelle record label, I was excited.  When I saw the list of performers, my jaw dropped.  On trumpet was Dave Douglas.  I’ve attended many Dave Douglas concerts over the last twenty plus years, dating back to his days with John Zorn, and own many CDs he’s recorded as a leader.  Elan Mehler, co-founder of Newvelle Records, played piano at this session and his style has become familiar to me over the label’s three seasons of uniformly great releases.  I knew little of New York based acoustic bass player Simón Willson, except for his contribution to Newvelle’s Piano Noir LP.  However, I got together with the band the evening before the concert, and couldn’t take my eyes off Simón, whose energy was infectious.  John Gunther, composer and multi-instrumentalist (saxophones, clarinet and flute) has recorded extensively as part of New York’s “downtown” jazz scene.  As associate professor at University of Colorado Boulder, and director of their jazz studies program, he was the group’s local performer for the concert, and had warmed up the ensemble the day before at a campus workshop. Singer Dominique Eade recorded twice with Ran Blake, and I loved her well-received 2017 CD, Town and Country.  In addition to a long career as an instructor at New England Conservatory, she has an extensive catalog of recordings. 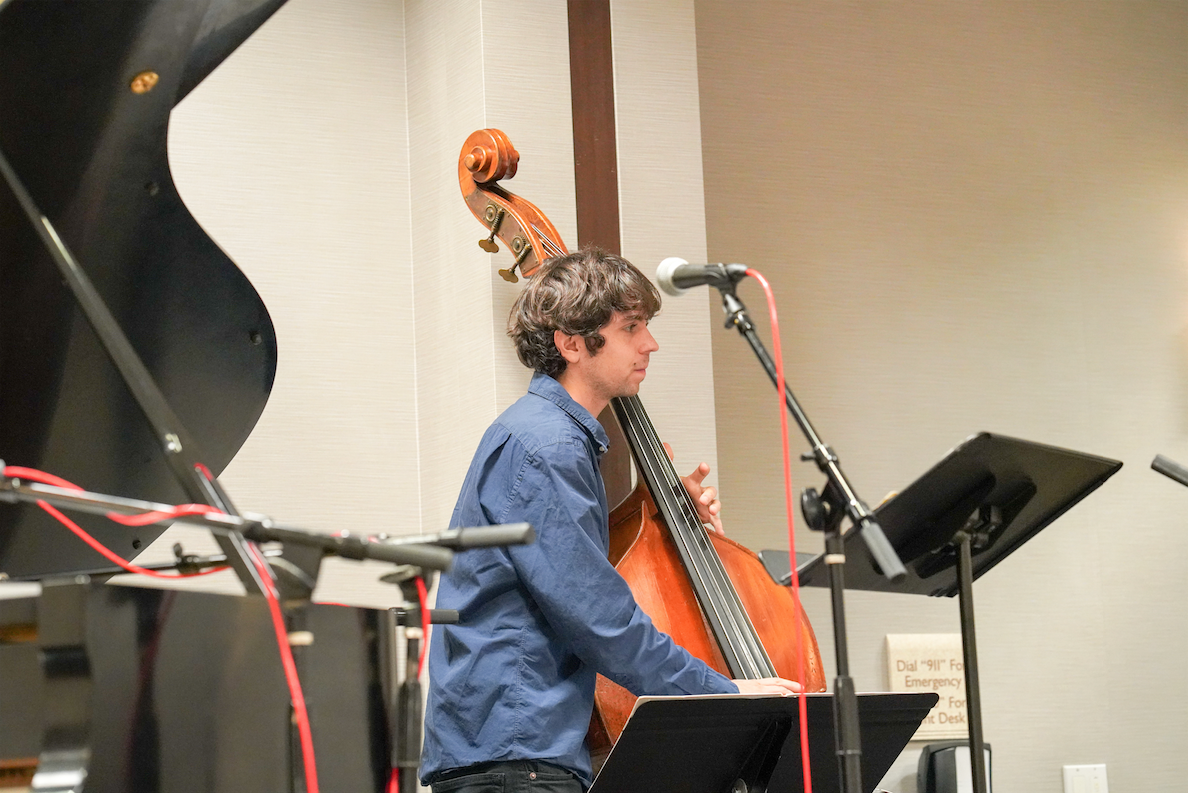 For those new to this record label, Newvelle issues a new record every other month, sold as a yearly subscription.  Each LP is a work of art—the clear vinyl LP is packaged in a beautiful foldout cover, embellished with commissioned artwork and prose, and is supported by extensive information on the label’s website (www.newvelle-records.com). I’ve heard every record released over the last three years and Newvelle’s consistency of high quality is unequaled in today’s music industry.  Watch out Blue Note and ECM!

The concert was held at the Denver Tech Center Hilton Garden Inn, in a large high ceiling room where I had attended other events.  I recalled fairly poor sound at those non-musical events that had involved a PA system.  Fortunately, Nordost arranged for a professional sound engineer to set up the room and sound system.  He brought in a very high quality sound system and mixing board and the results were spectacular, turning a pig’s ear room into a very good sounding hall.  The stage itself was a little small for the group, and had an effect on my ability to capture good pictures, but the players adjusted well to the somewhat cramped space. 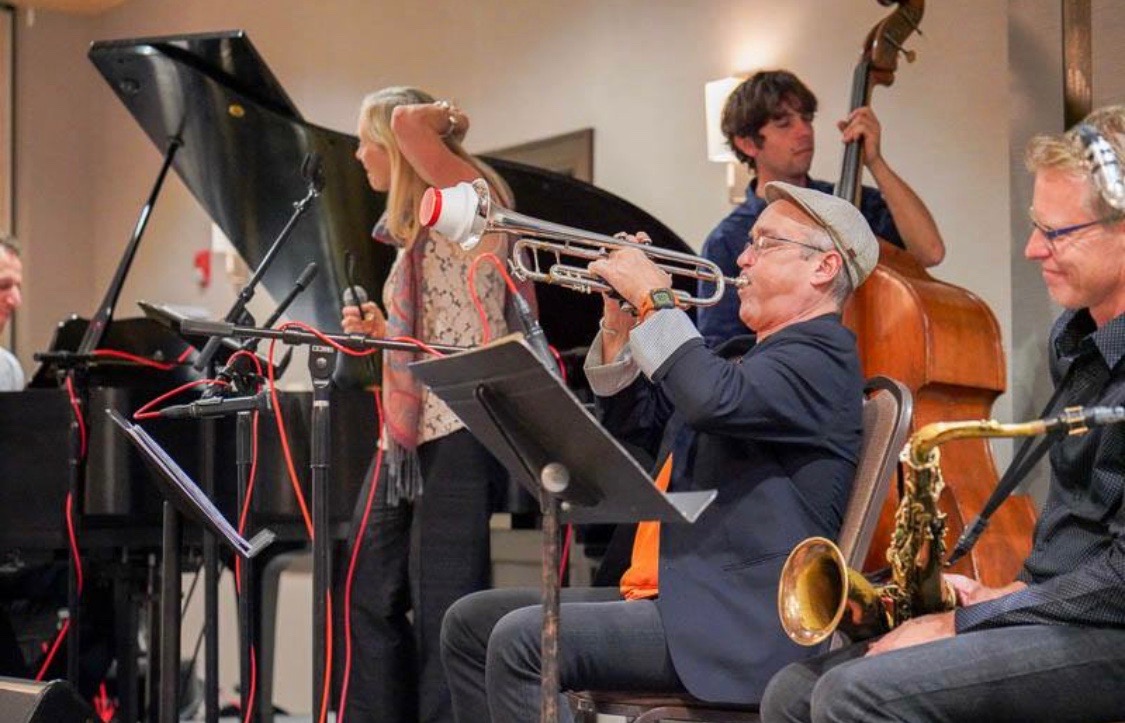 Nordost has installed its professional cabling at the New York recording studio where Newvelle Records records all its sessions, Eastside Sound.  Beginning with Newvelle’s fourth season, all recordings will be made through Nordost cables.  I’ve reviewed the first three seasons for various publications, and look forward to comparing the sound of the new studio recordings. In the meantime, Newvelle’s artists are getting the additional exposure from the Nordost involvement. 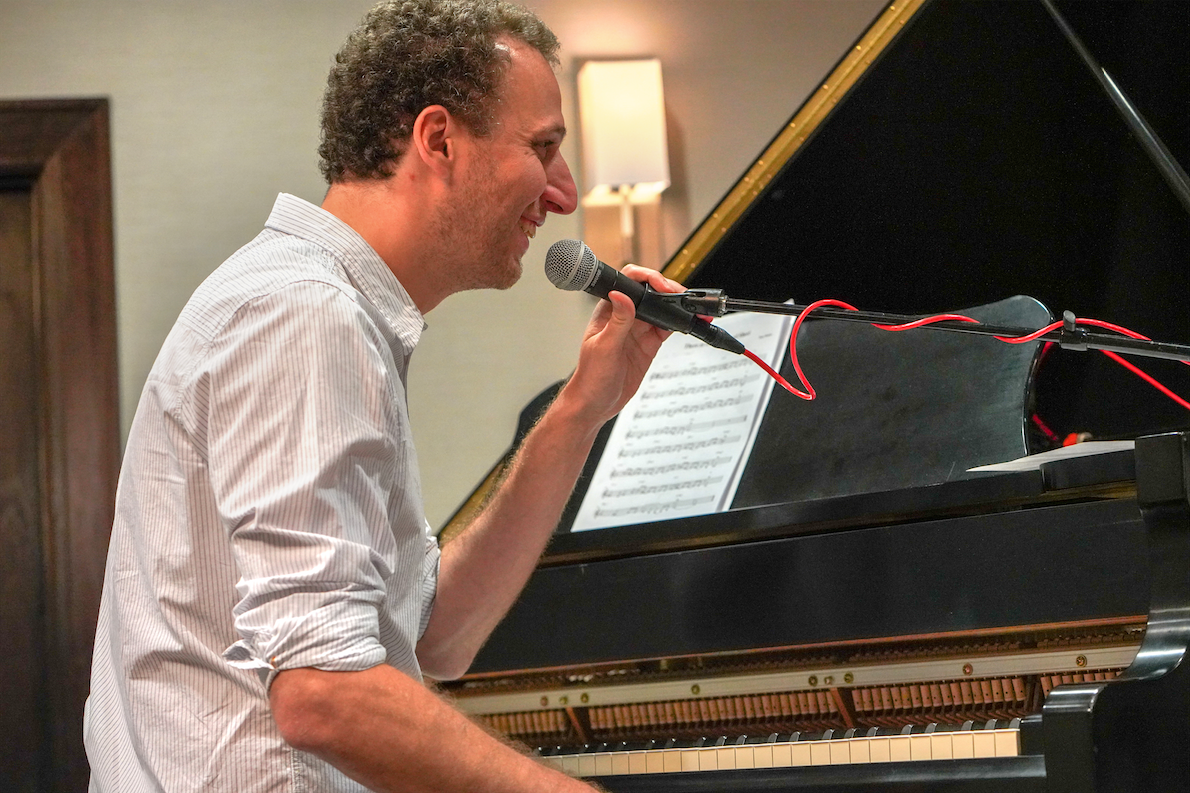 The concert featured never before heard compositions from Dave Douglas, as well as material from Newvelle’s LP “Piano Noir”, and material from its third season.  In Elan Mehler’s words, the band, “is dancing between some basic intersections of style and genre—jazz and folk music, poetry and improvisation, prose and composition.”  They opened with a composition from American folk music singer/songwriter Jean Ritchie, an Appalachian song “West Virginia Mine Disaster” recorded by Dominique Eade on her most recent CD Town And Country (Sunnyside).  Next up was “Bear It To Heart” from the “Piano Noir” LP, that featured Elan Mehler and Simón Willson from this group.  The group then launched into a Douglas composition taken from a Jack Kerouac haiku, “Arms folded to the Moon”. I confess that until the middle of the concert I hadn’t recognized vocalist Dominique Eade, but by this third song of the concert, it hit me.  Her resemblance to vocalist Jeanne Lee on The Newest Sound Around (RCA LPM-2500 with pianist Ran Blake) was immediately obvious. I slapped my head over my short memory.  I own two of her CDs and am a big fan. That third song mesmerized me.  The composition, Eade’s singing, and the bands’ excellent ensemble playing had me laying down my pad and pen for the rest of the concert.  True, my hands were engaged in taking photographs, but I was captivated. 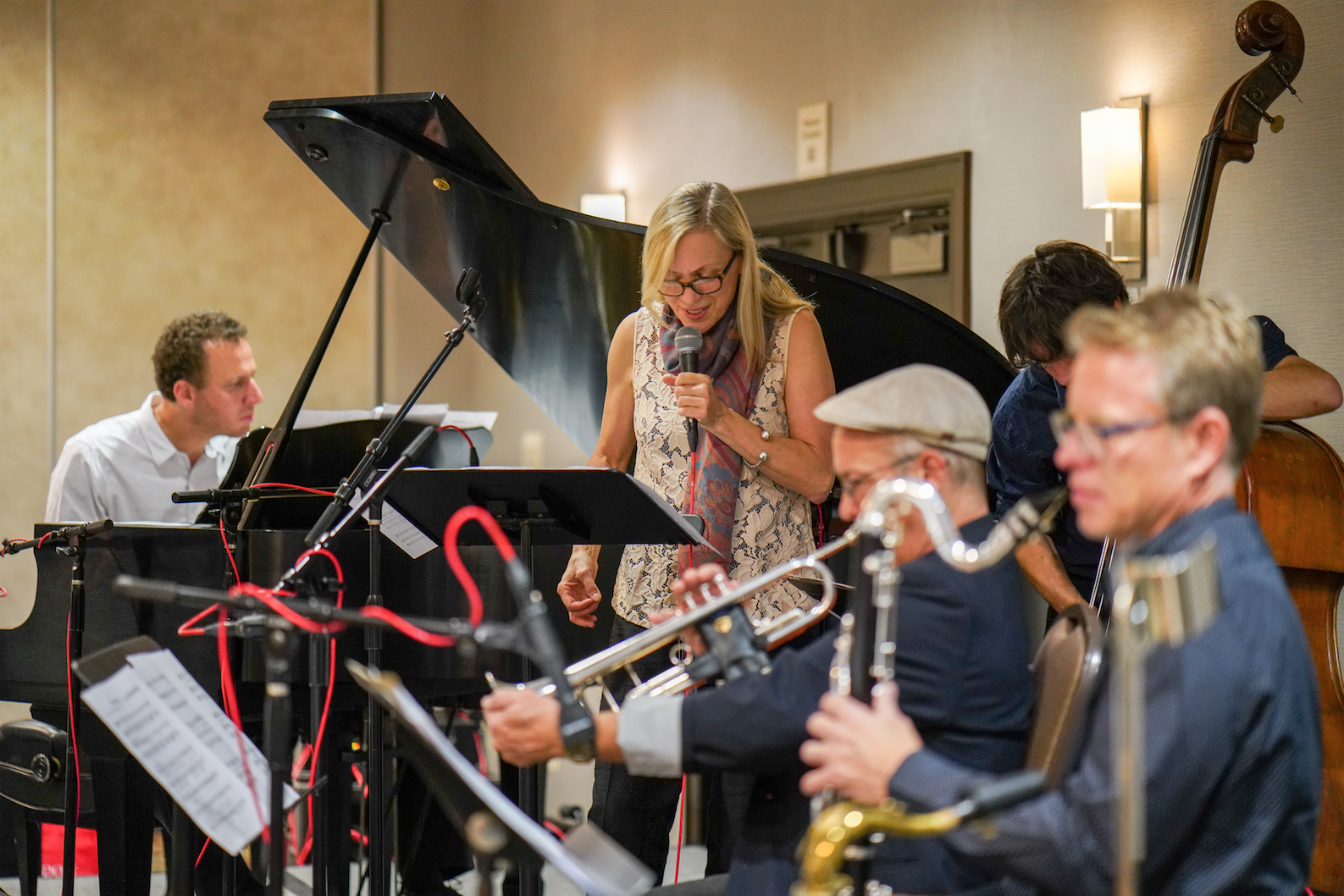 This was a performance far above those typically found hi-fi shows.  I searched my memory for comparisons and the only hi-fi show concert I could recall was at a show in New York well over a decade ago, featuring saxophone great Joe Lovano. But merely comparing it to hi-fi show concerts is selling it short.  I attend concerts (most frequently in the San Francisco Bay area) on a regular basis and jazz concerts at least a few times monthly.  This concert was among my favorites of this year, and one I will not soon forget. It sent me home to listen to my Newvelle Records LPs and Dave Douglas and Dominique Eade CDs.  What more can you ask for from a great concert?

Rocky Mountain Audio Fest was a resounding success. There was a lot going on with Nordost at RMAF this year, so hopefully you were able to enjoy all of it. Nordost installed a world-class system in the Humboldt Peak room, including gear from dCS, CH-Precision, and VPI, loudspeakers from YG Acoustics, and of course a full loom of Nordost’s Supreme Reference, Odin 2 Cables.

Humboldt Peak was also the site of our turntable master-classes— a real treat for RMAF attendees— hosted by editor of The Audio Beat, Roy Gregory.

Over at CANJAM, Nordost joined forces with Woo Audio to give show-goers the opportunity to perform headphone cable demonstrations for themselves!

Nordost truly had something for everyone this RMAF. If you missed it, here are some photos from these events and more!

The world-class system in Nordost’s room: 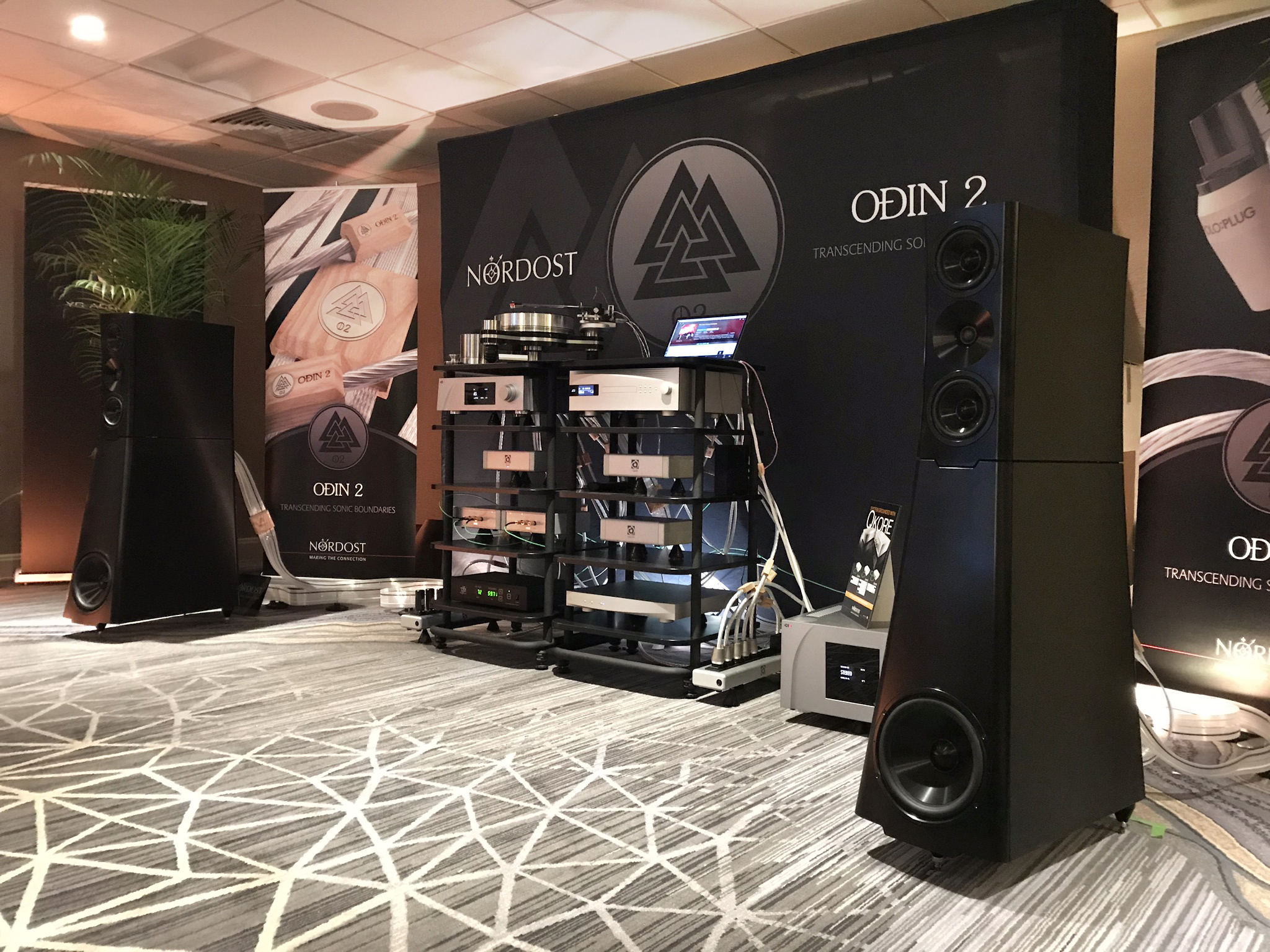 The YG Acoustics Sonja 2.2 speakers in the Nordost room were bi-amped with Odin 2 Speaker Cable! 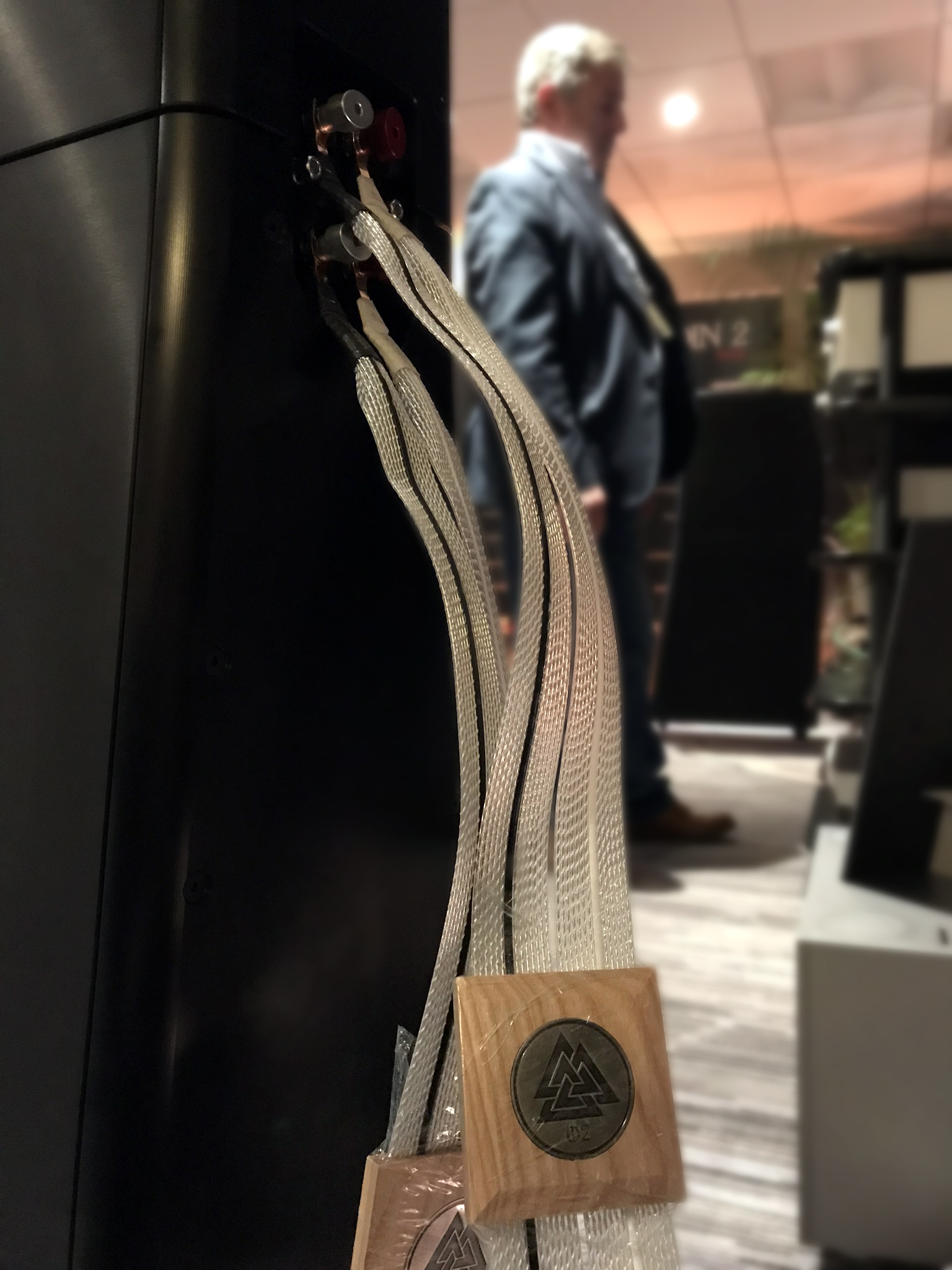 The VPI Avenger (with Odin 2 cabling): 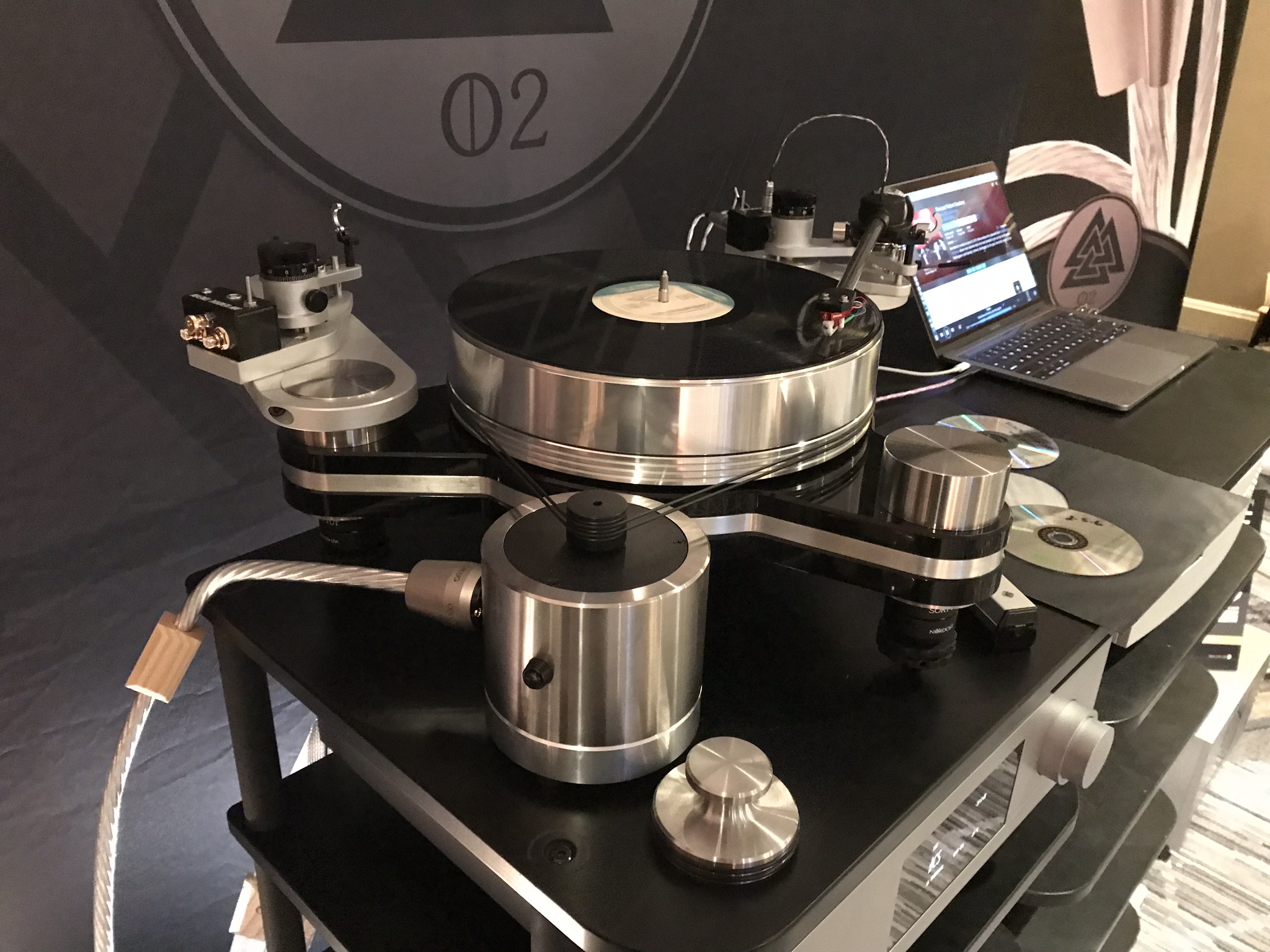 A lot of good looking cables at work! 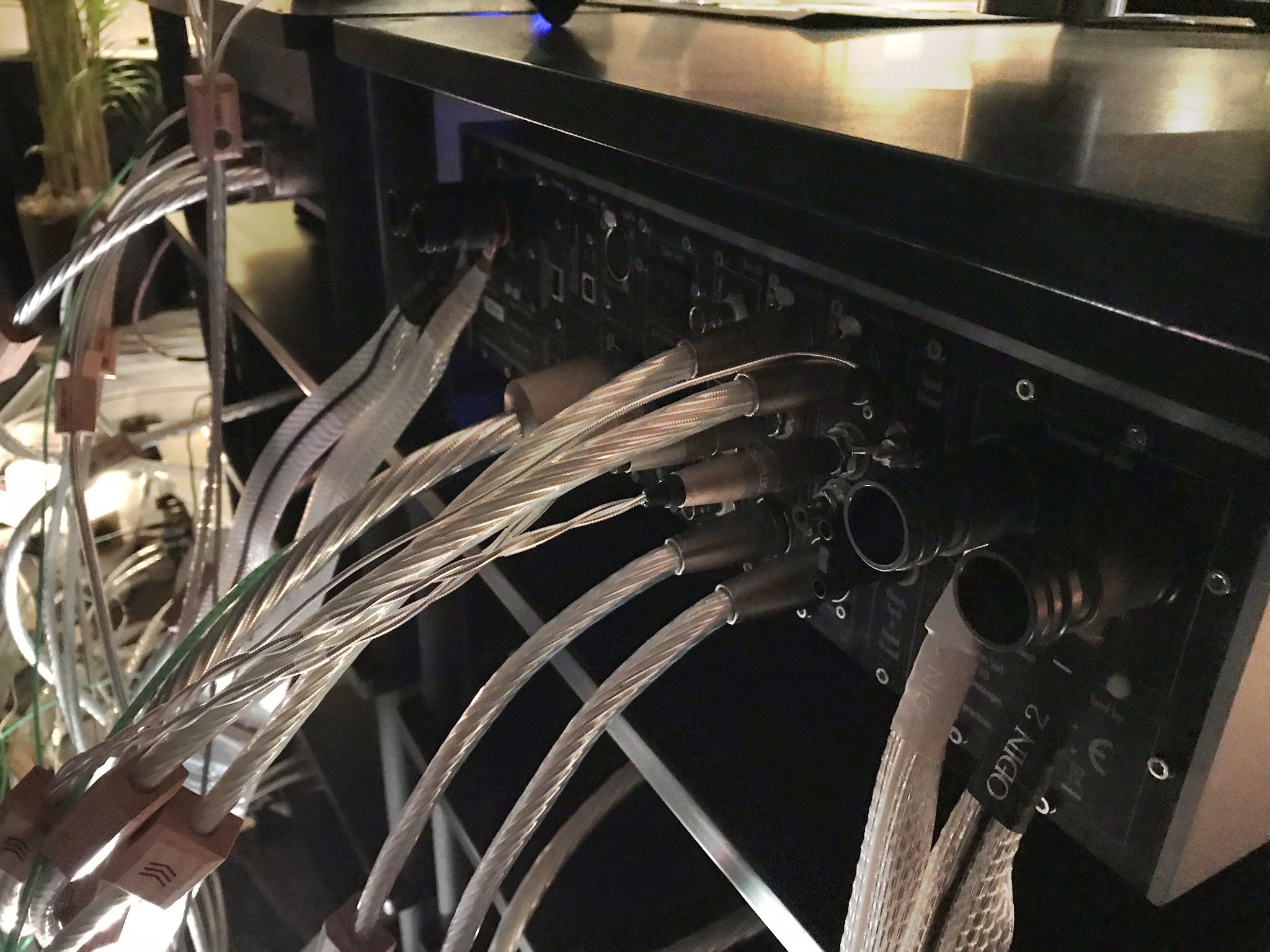 The Audio Beat’s Roy Gregory preparing for a master-class: 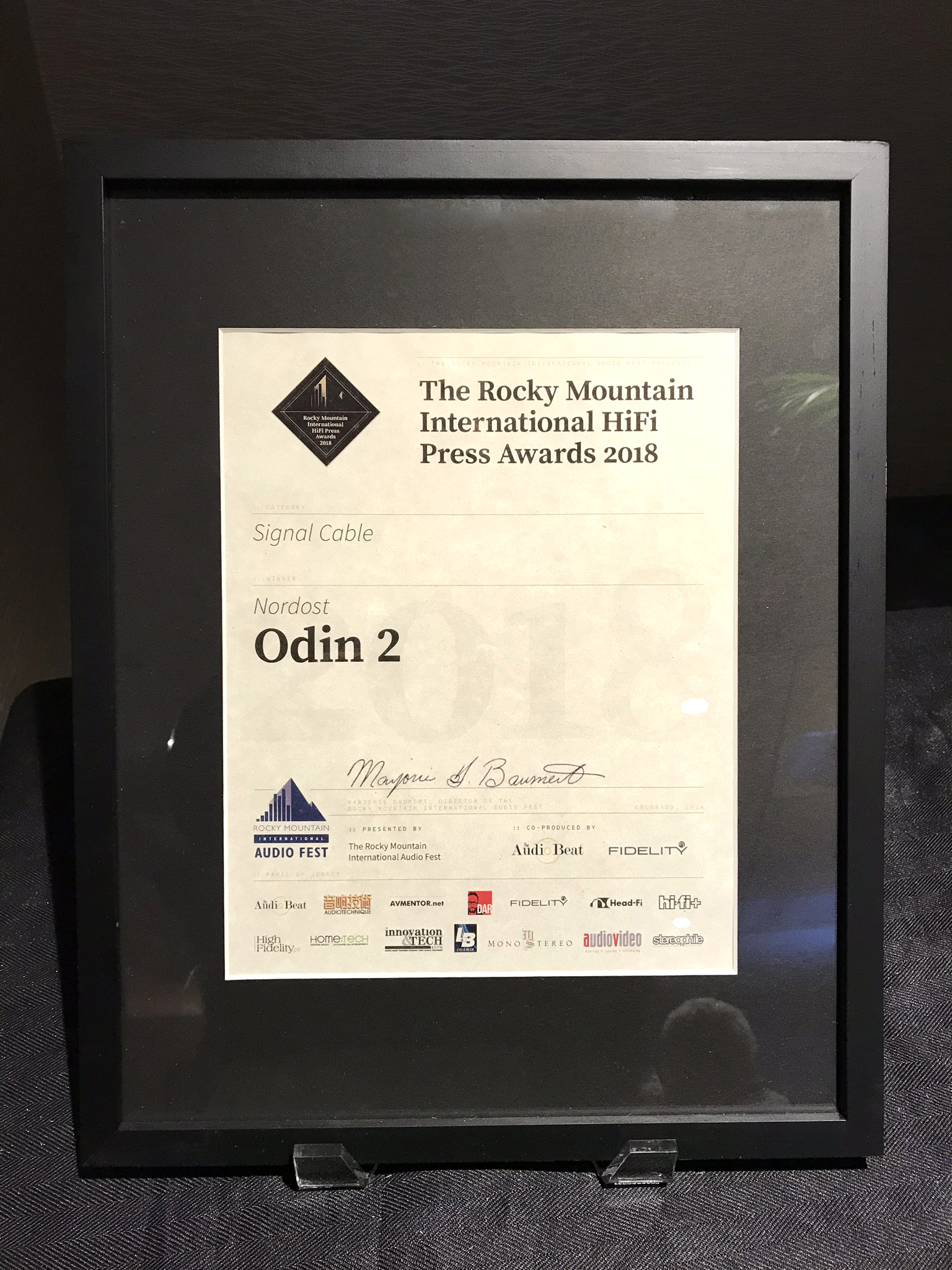 Dave Douglas and his quintet put on an incredible show!

The Nordost and Woo Audio table at CANJAM: 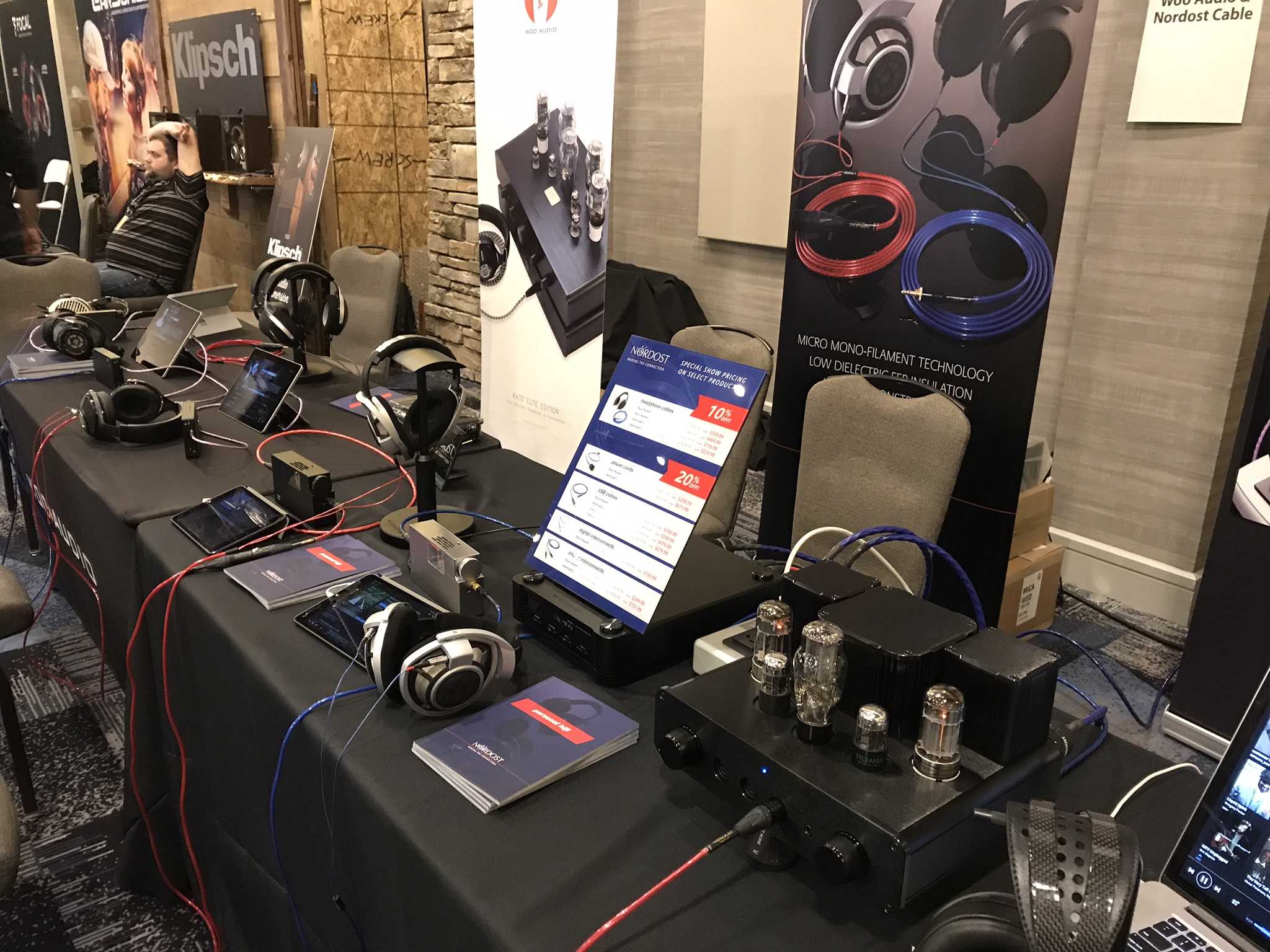 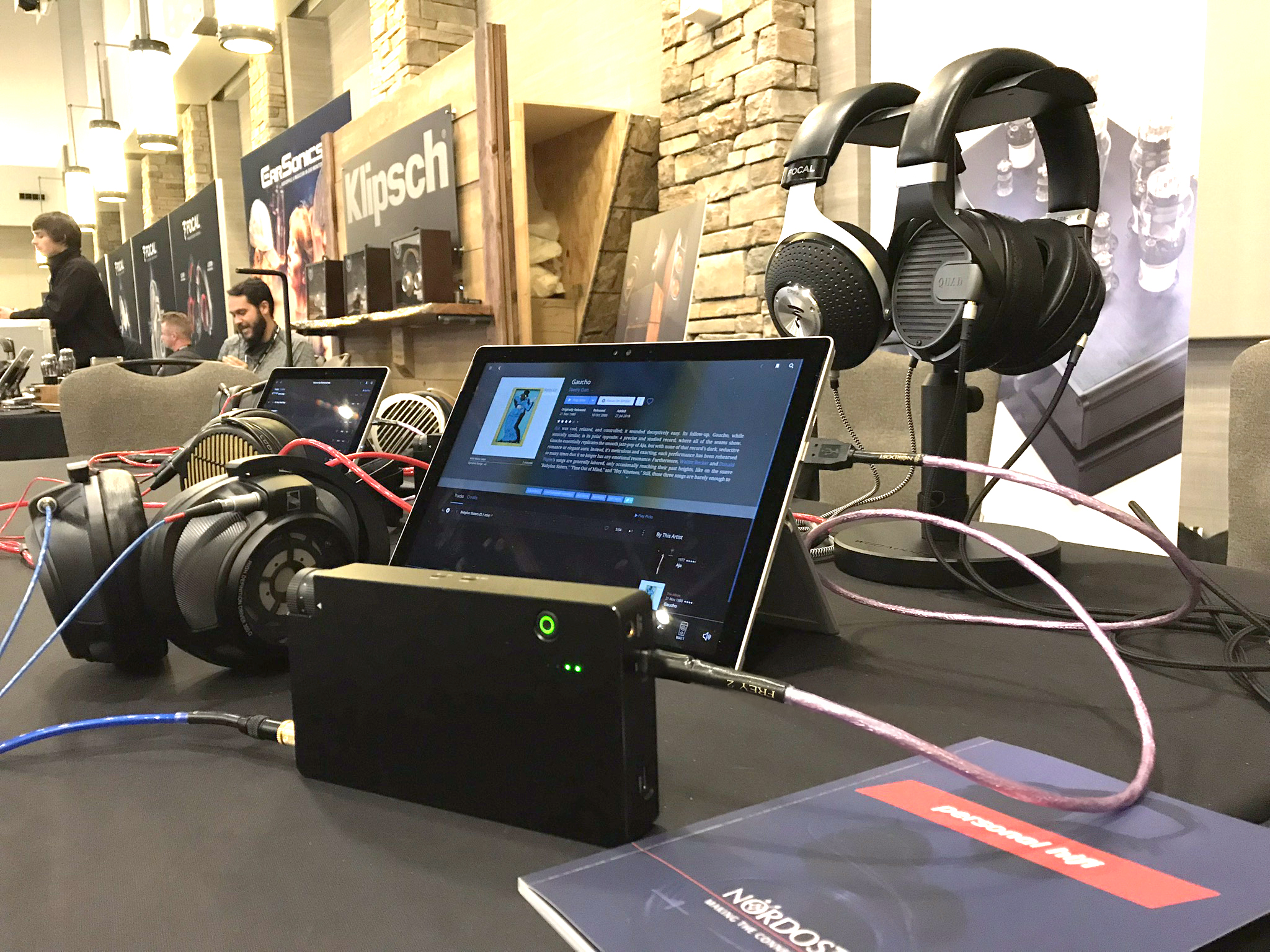 Two identical rigs were set up to compare our Blue Heaven and Heimdall 2 cables: 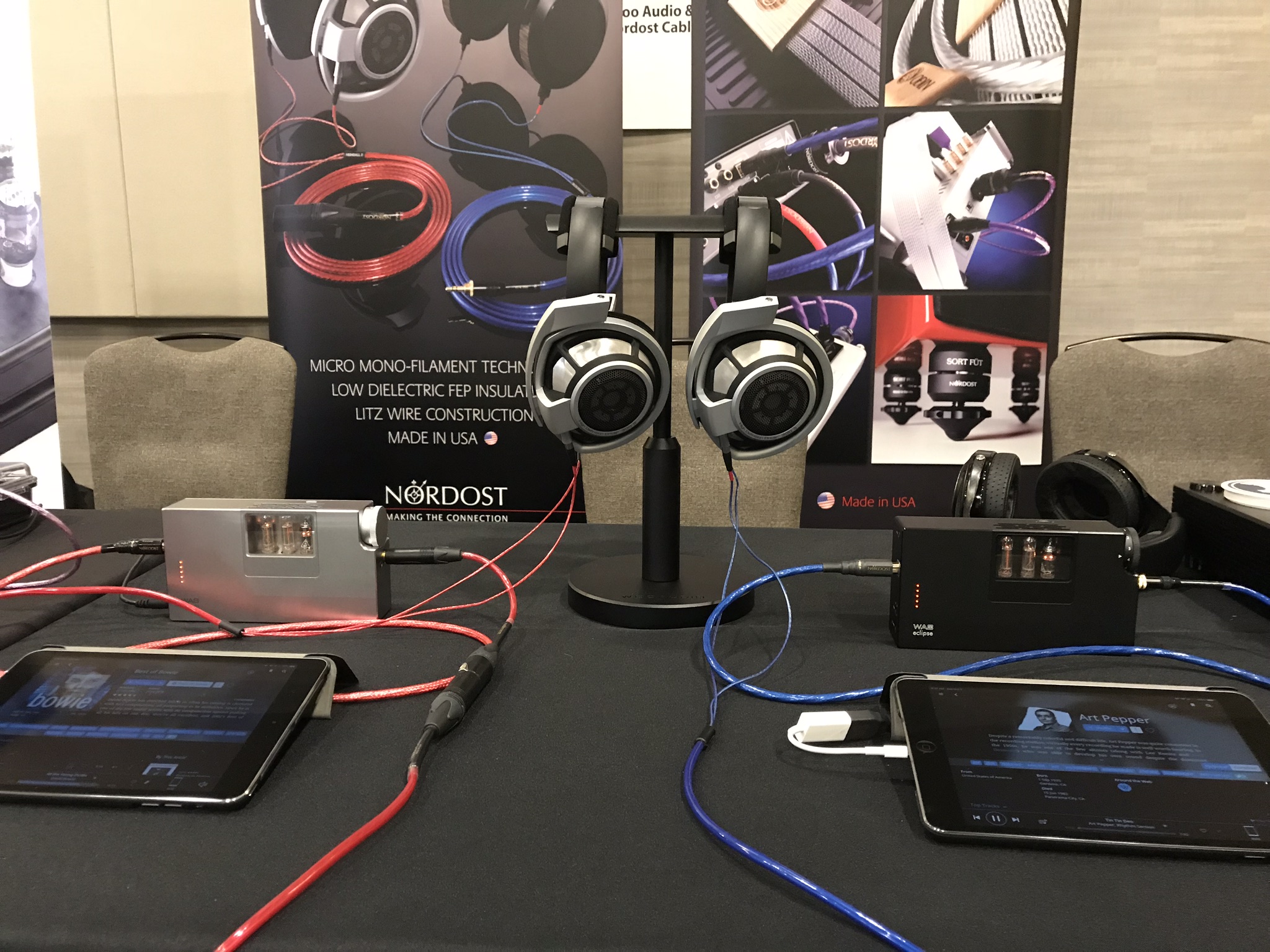 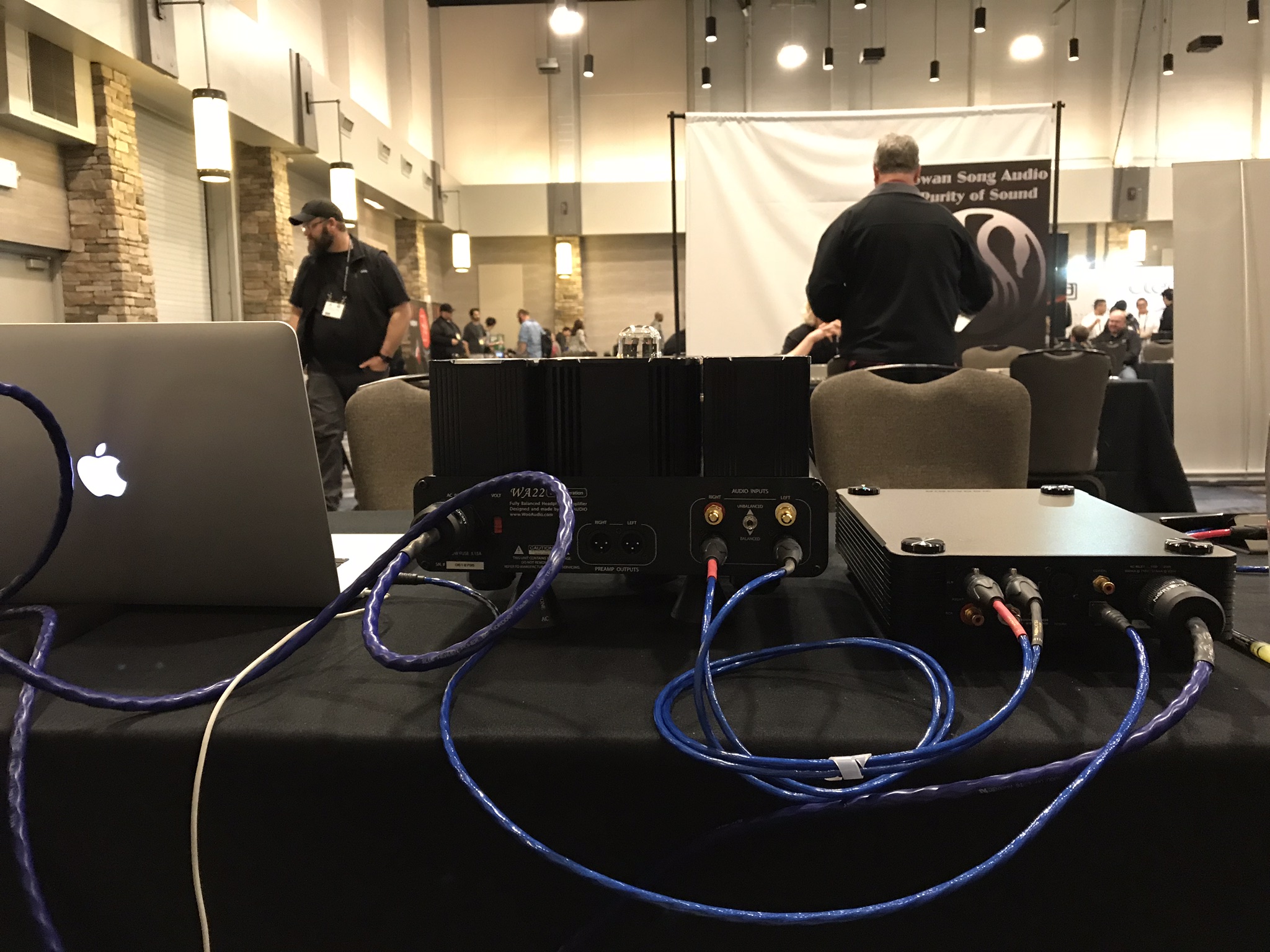 In Raidho’s room, our Valhalla 2 cables were used to wire the system: 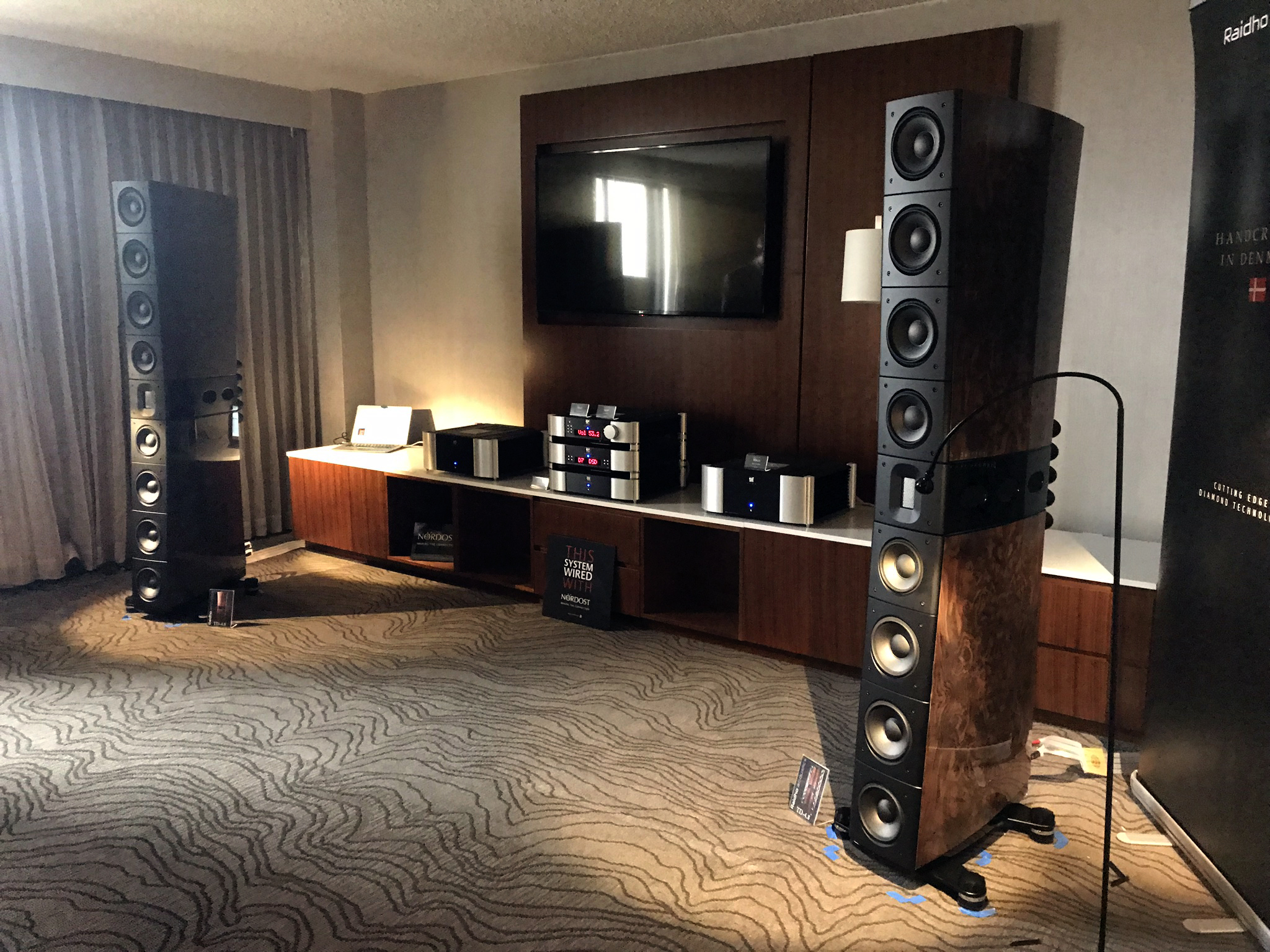 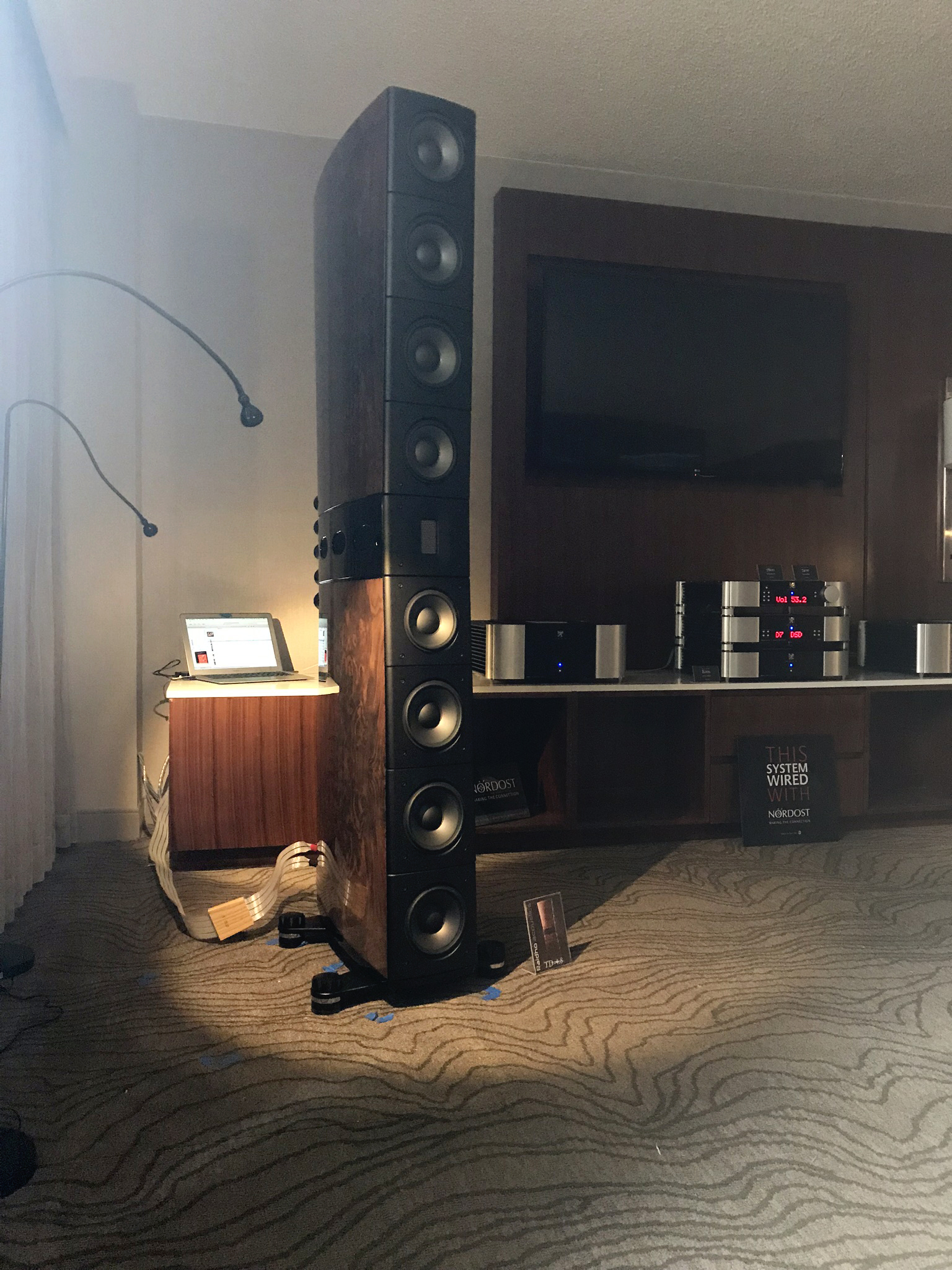 Gershman Acoustics’ room also used Valhalla 2 cables, along with some of our other offerings: 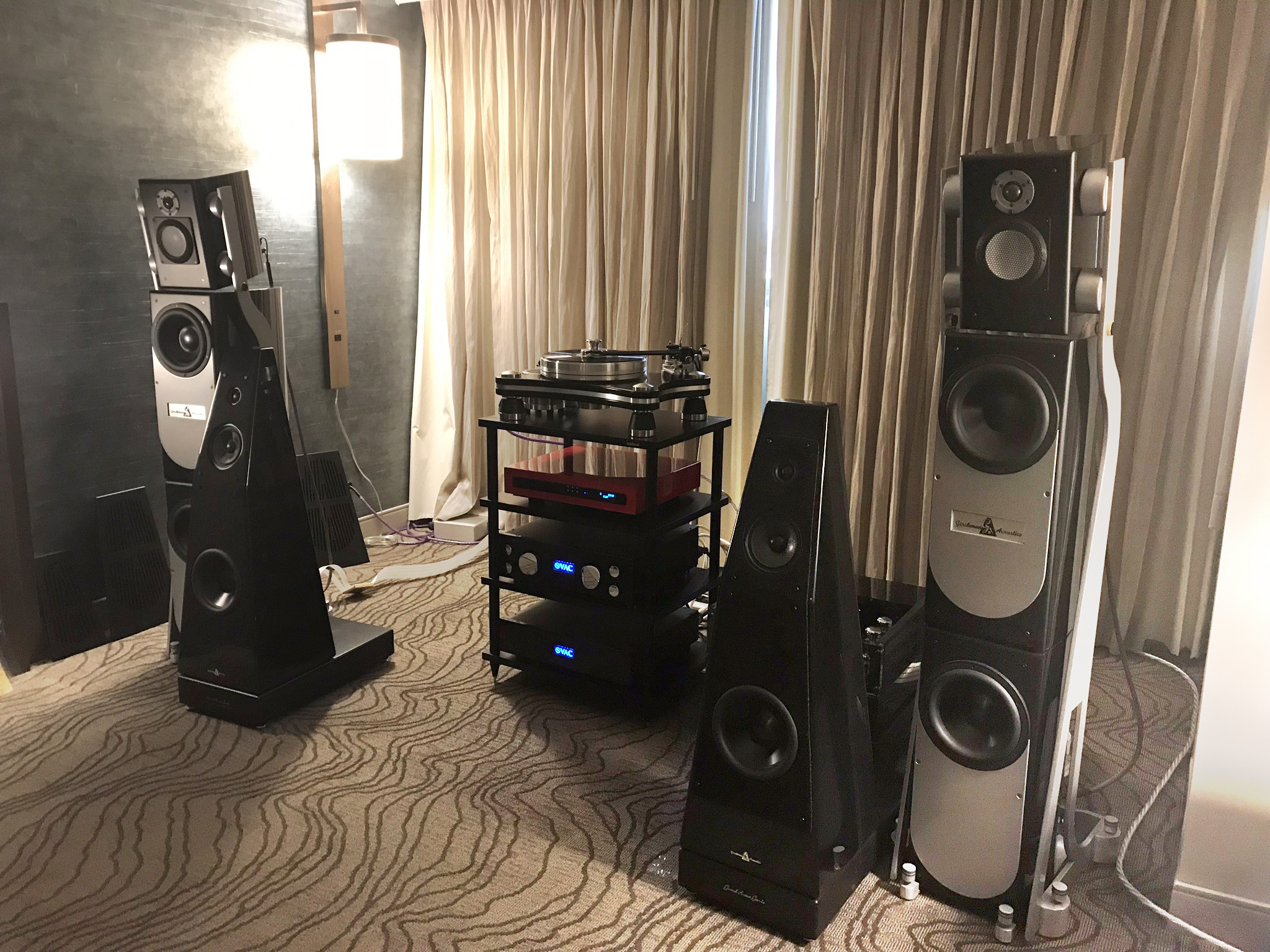 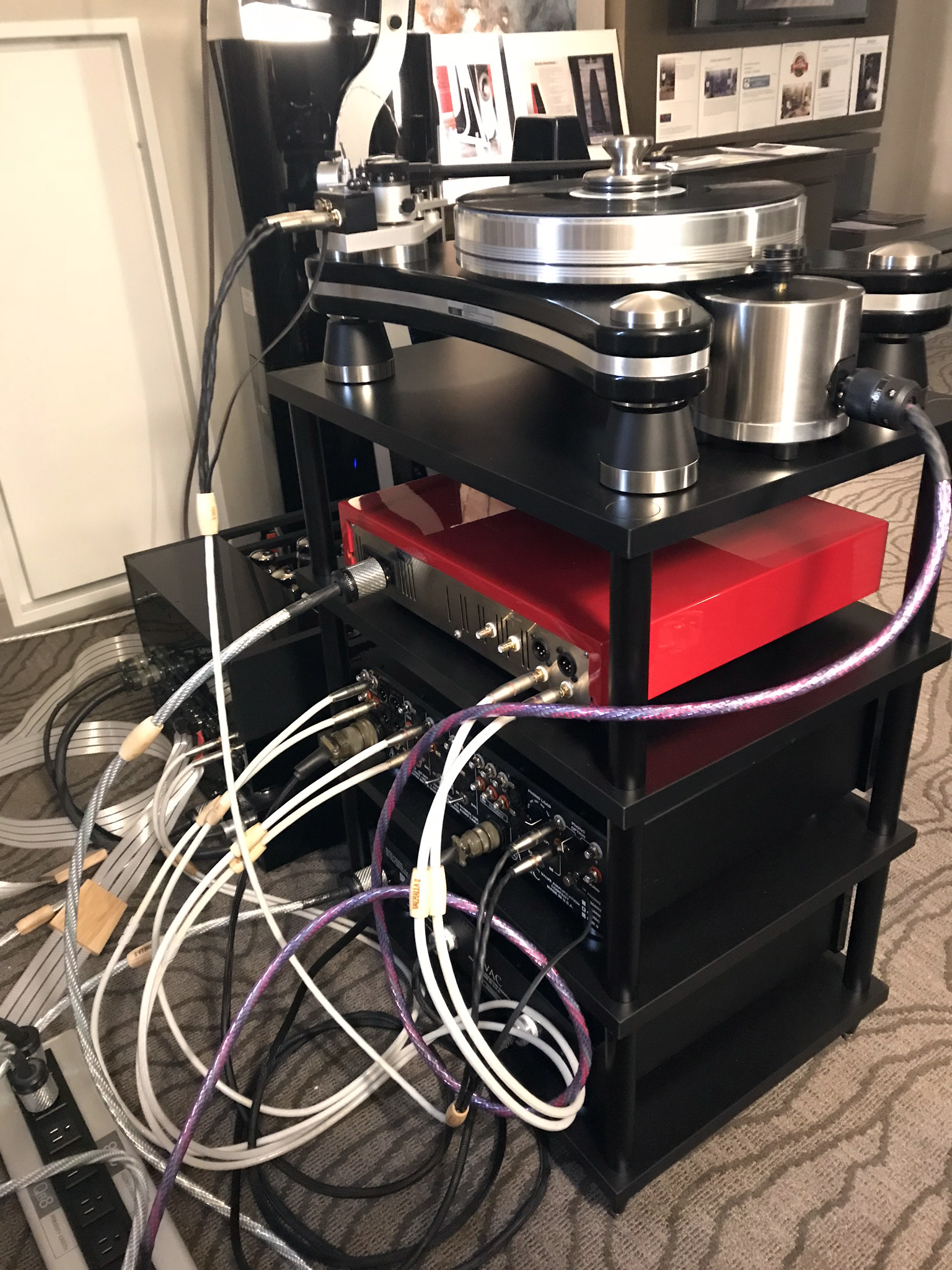 Nola’s system was equipped with Odin! 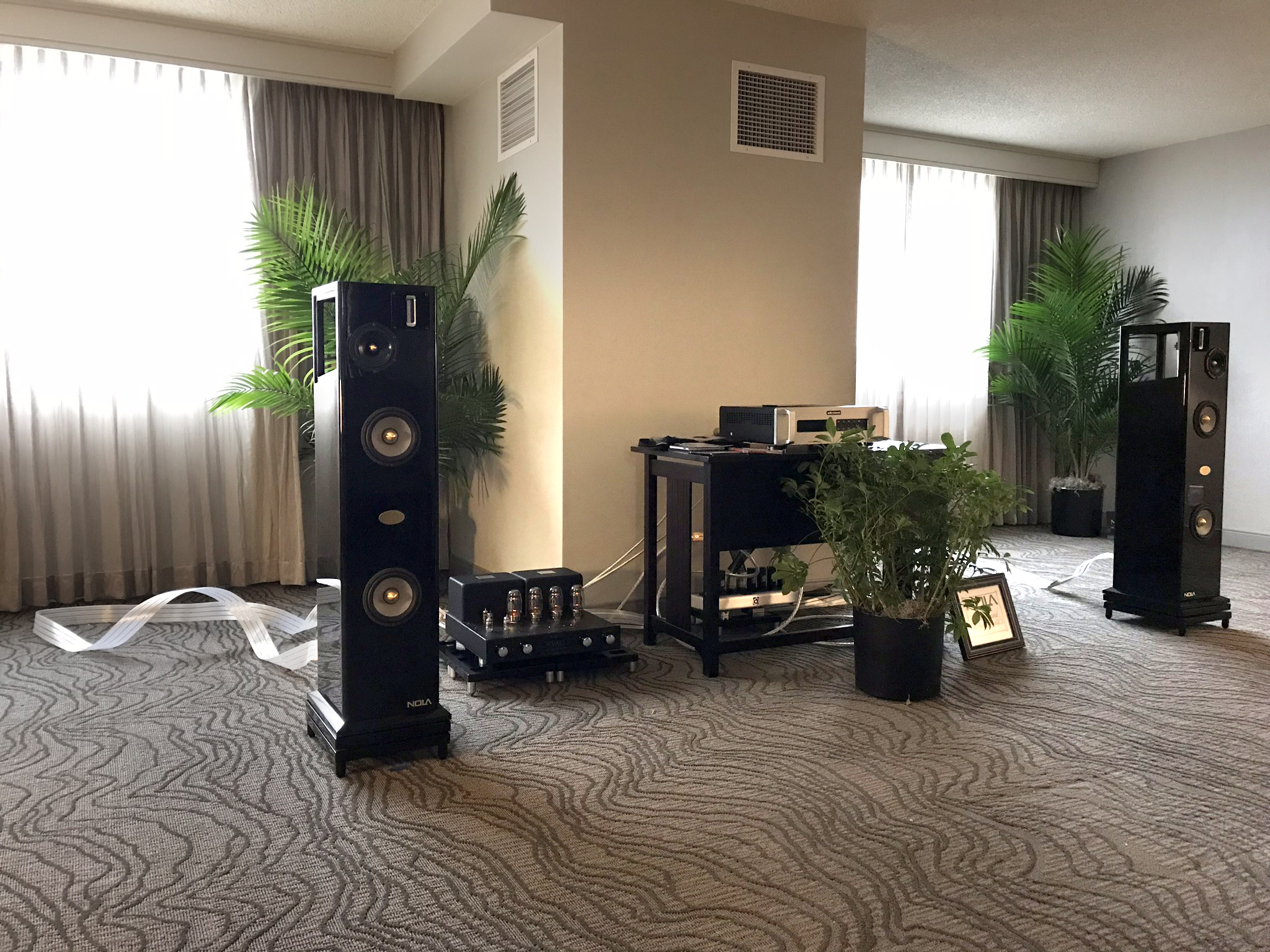 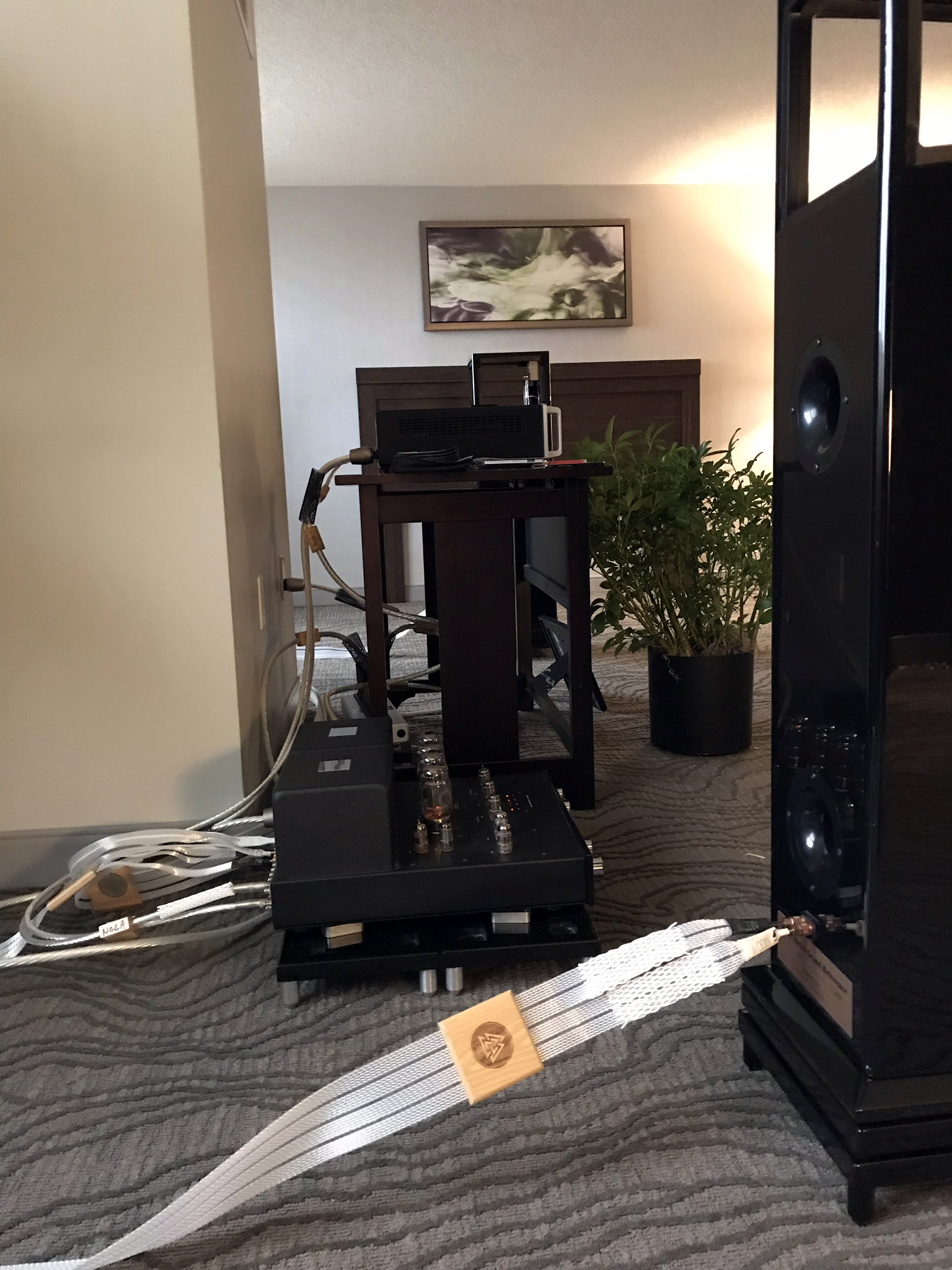 Nordost is happy to share a great review of our SuperFlatline Speaker Cable. SuperFlatline was one of the first cables to put Nordost on the map. This cable became known throughout the hifi industry as one of the most respected high end speaker cables, offering a performance that was virtually unmatched at its price point.  Today, more than 20 years later, its reputation remains the same. In his review for Headphone.guru, Gary Barker was very impressed by the SuperFlatline speaker cables: 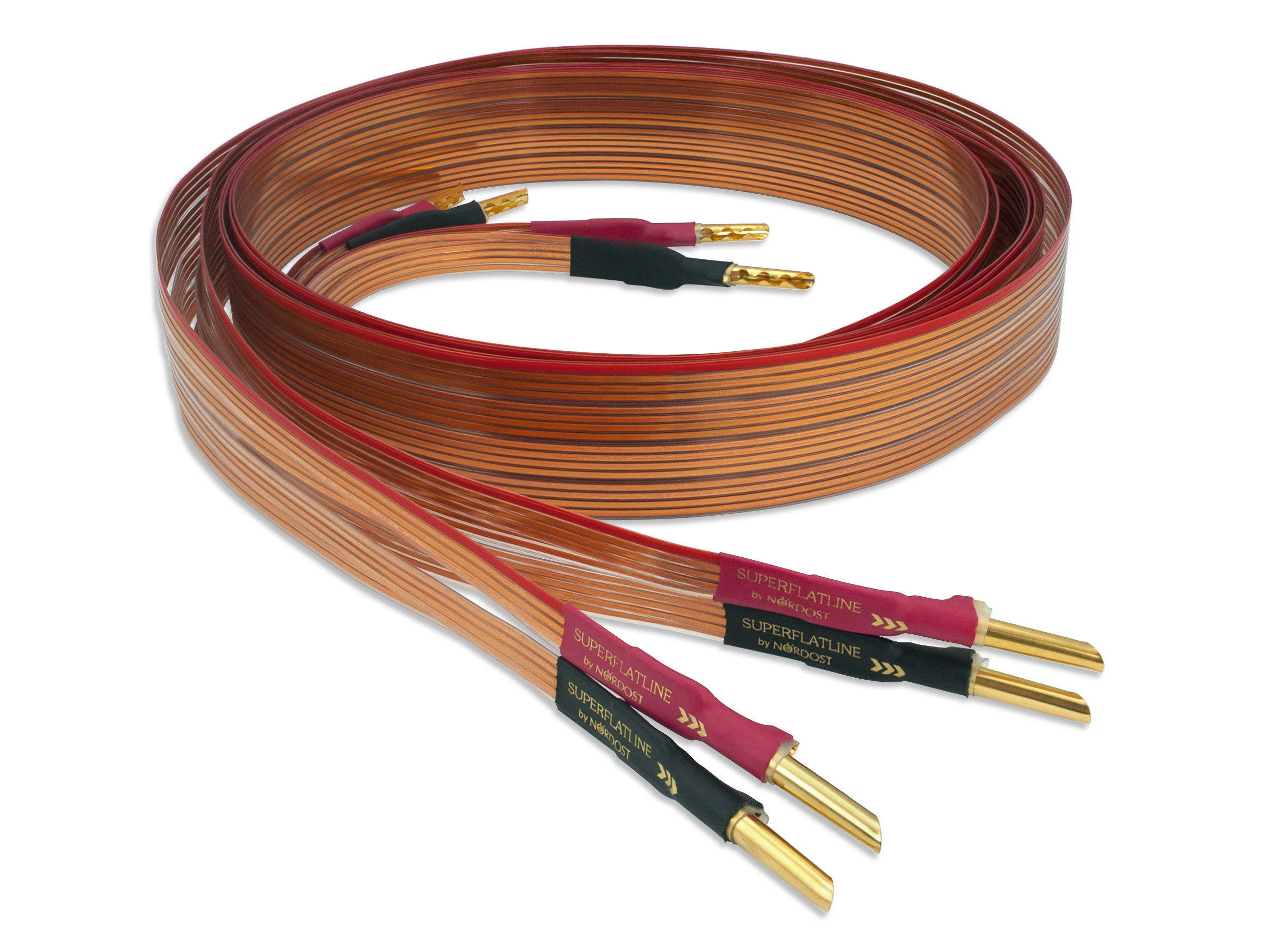 Come and see Nordost at the Toronto Audiofest! Please join us, October 19th – 21st, at The Westin Toronto Airport Hotel. Throughout the show, our sales representatives and product specialists, Bruno de Lorimier and Michael Taylor, will be performing live demonstrations and product comparisons, in the Windsor room. The Toronto Audiofest is a perfect opportunity to hear the effect that quality cables can have on a hifi system, and to determine how the caliber of performance is improved as enhancements are made to cable design. While there, come and visit us at our sales booth, where you can take advantage of our special show prices on select products! Admission is free to the public, so we hope to see you there! 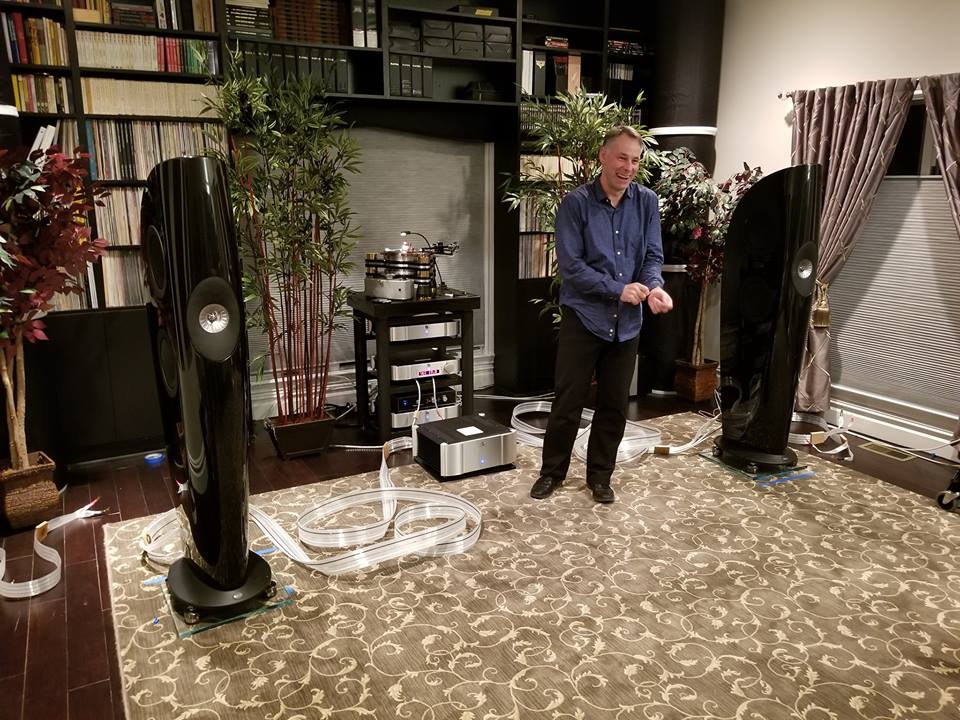 Nordost is excited to announce that we will be hosting Roy Gregory, editor of The Audio Beat, for some turntable-centric seminars at RMAF this year. In his seminars, Roy will be demonstrating just how big an impact turntable set up has on the final musical results of record replay — and just how much more there really is in those grooves. Covering everything from tonearm cables to mono cartridges and variations in replay EQ, this is one presentation you really don’t want to miss. Join us in the Humboldt Peak room on Friday at 3 pm, Saturday at noon and 3 pm, and Sunday at noon for this analog master-class!

Here are some of the songs that we will have on rotation this October.